The Man Who Could Not Shudder - John Dickson Carr

In slowly working my way through the works of John Dickson Carr I think I may have found a book to surpass the devilry and ingenuity of He Who Whispers as my favorite of Carr’s books. The Man Who Could Not Shudder (1940) is an intriguing mystery that not only features Carr’s most frequent recurring motif (a haunted house or haunted room) it presents two of the most ingenious impossible murders in the Carr (and Dickson) books I have read so far.

Martin Clarke is planning a weekend house party in which he hopes to show his guests the paranormal phenomena that pervade Longwood House, his newly acquired home with a reputation for fatal hauntings. Seems in the past a butler inexplicably grabbed hold of a chandelier and was killed when it came crashing down from the ceiling and landed on top of him. There have been reports also of furniture leaping out at visitors. The grandfather clock in the hallway supposedly stopped at the precise time the first owner, Norbert Longwood, died. And centuries ago Longwood himself was supposedly seen sitting by the fireplace the night after he was placed in his coffin. Clarke is ready for an all out ghost party and hopes to count among his guests a lawyer, a scientist, an architect, a spiritualist, and a priest. Clarke inadvertently invites danger to the house, too. Instead of fun and games with ghosts and poltergeists he has a weekend of violence. One of Clarke’s guests is horribly murdered and it seems that a ghost was responsible.

Benton Logan is found shot dead in a study in which an antique gun collection has been mounted to the wall above a fireplace. His young wife had entered the room just prior to the murder and swears she saw a gun jump off the wall and fire in midair. No one was in the room but she and her husband yet she was nowhere near the gun nor was her husband. Is it a possible that a ghost picked the gun off the wall mounting and fired it at her husband?

Gideon Fell shows up along with the police to help sort out the real from the illusion. Is there genuine psychic phenomena at work? Is Longwood House a cursed home inhabited by the ghost of a 19th century man rumored to have been involved in witchcraft? Or is it all the work of fiendish human hands adept at fanciful trickery?

And remember that tale of the butler who went swinging on the chandelier only to have it become his deathtrap? There will be a chilling echo of that mysterious death and other threats and near murderous attacks before the mysteries are all rationally solved and the ghosts are put to rest. The solution when it comes is one of Carr’s most ingenious and gasp inducing finales. There are three obscure clues planted in plain view that can lead to an understanding of what exactly is going on in Longwood House, but only the most astute readers will catch them.

If you like your detective novels bizarre and puzzling, if the miracle problem or impossible murder is to your liking The Man Who Could Not Shudder will be right up your alley. The abundance of baffling situations will satisfy even the most demanding reader. It’s the kind of book that makes a true fan of detective novels want to give the author a standing ovation. 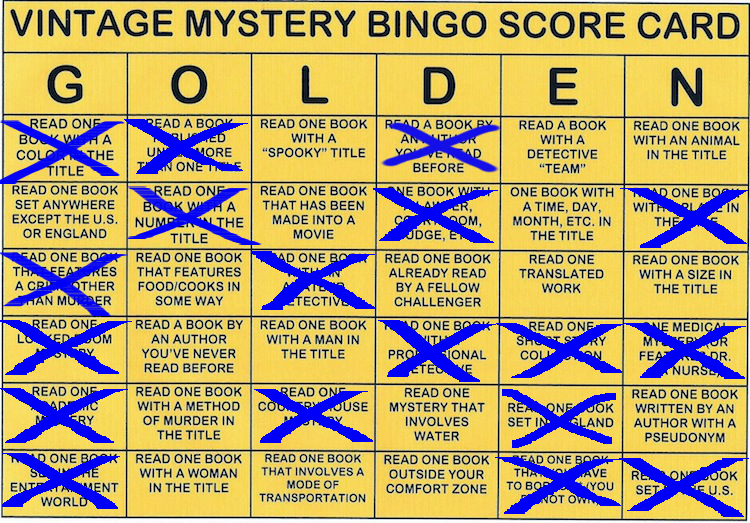 Reading challenge update: Golden Age Bingo Card, space G4 -- "A Locked Room Mystery". I prefer the umbrella term "impossible crime" under which all "locked room" mysteries fall. Not all impossible crimes have a genuine locked room, but they are all related to the same subgenre.
Posted by J F Norris at 12:30 PM