"Laff in the Dark" (Flash Fiction)

Flash Fiction Challenge from Patti Abbot for October 18, 2011. Pick a painting by Reginald Marsh and write a short short story based on the images. For other stories and paintings see the list posted at her blog.


LAFF IN THE DARK 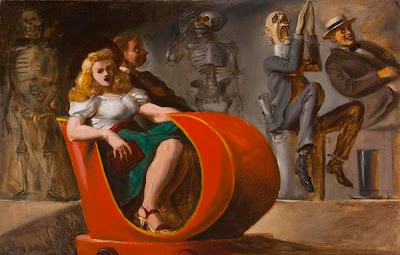 He always lied about his job when people asked him what he did for a living. It started as a half truth. “I work in show biz” was his smart aleck reply, but it soon became more and more ambiguous when he tired of the usual responses. “Oh, are you an actor?” “Singer?” “Dancer?” Always a performer of some type. Though he did consider himself a performer at one point (in a completely different context than one normally envisions the profession) to tell the truth about his work, past or present, these days was just like opening the door to his wardrobe closet and revealing the drab work clothes of a day laborer. He couldn’t stand being thought of as boring. And so he lied.

Nobody cared about the life of a carny worker. Even if he were a performer he’d be looked down on. But he didn’t perform. He took his skills as a car mechanic and driver from his previous life and put them to work in this place where he thought he could start over. He tinkered with the mechanics of a rickety mechanical tram on small gauge railway tracks. He got his hands dirty and greasy while surrounded by the raucous laughter of people with real jobs trying to forget themselves in a land of make believe and sugary foods, loud music and freak shows, and the idiotic rides like the one he worked. 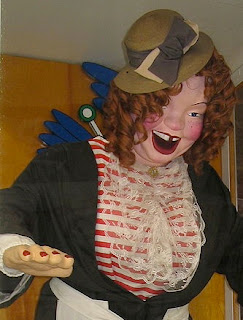 Even the name was idiotic. With its ignorant phonetic spelling intended to connote zany fun and the chipped and peeling painted portraits of the grotesque clown-like skeletons it was hardly his idea of a riotous good time. It was for kids and adults who refused to grow up. An excuse for some yokel to take his date into the dark and grope her and make out while supposedly scaring her at the same time. Har-de-har-har. Riding around in the dark getting spooked by jack-in-the box dummies badly dressed up to look like ghouls and dead bodies all accompanied by that never ending soundtrack of that irritating female cackling. The recorded laughter emanated from the dummy of the fat lady who rocked back and forth high above him sandwiched in between the giant A and F in the hand lettered, garishly painted sign.

He pulled a lever and sent another tram car into the dark.

Squeak. Clank. Clickety-clack. Bang. This was his routine for six hours a day. Pull down the safety guard, pull back the brake lever, send the car on the rails through the swinging doors painted to resemble the gaping maw of another laughing (or hungry?) clown face.

He longed to be driving again. Boy, did he miss that old Reo. But his last job went so wrong that he could never return to his old life. The Reo got wrapped around an ancient chestnut tree and was utterly useless now. His so-called partners vowed to empty a tommy gun into him if they ever found him. He had to disappear with what little money he stole from that stinking lot of thieves. And that stash of dough was already running low when he lucked into this pathetic excuse of a job.

He was sure that his vanishing act was far better than the one ineptly performed by the two bit magician and his skinny acne scarred assistant who were his next door neighbors in this ragtag operation. You could always see the bottoms of her unpolished high heeled shoes in that faulty box she was supposed to have disappeared from. No one was going to find him here that was for damned sure.

Another damn thing about this lousy boredom inducing job:  too much time to think. Too much time to regret. Too much time to dream about doing in so many of these customers with their empty mirthless laughter and their constant gorging on caramel apples, popcorn, hot dogs and funnel cake. Funnel cake? That powdered sugar coated mess resembling a doughy turd. Who could eat something so revolting? And the smells. The air reeked of fetid and burning sugar, rancid beer and the vomit of hundreds of pigs who never knew when to stop stuffing their mouths. He fled one Hell ruled by goons and thieves and killers only to find another populated with gluttons and drunks and horny fools willing to spend their hard earned cash on feeble dreams of short lived escape. They had no idea what a real escape was like. The sacrifice involved, the persona you had to create to blend in, the agonies you had to endure just to survive. It was Hell. Are there degrees of Hell on Earth? Wasn’t there some old book that talked about circles of Hell? Surely this carny life had to be included in one of them.

Squeak. Clank. Clickety-clack. Bang. Just sent another couple through the Gates of Hell. And the laughter that never stopped. Not just laughter - squawking, braying, whinnying, snorting. The sounds of a nightmarish barnyard of half human/half animal creatures forever eating and drinking and pissing and shitting and puking. So many of them were long overdue for a visit to the slaughterhouse.

“Hey, Buster Brown, turn that frown upside down.” Another couple. Always couples. This one looking surprisingly joyful though he knew it was artificially enhanced by beer and the promise of lust filled groping in the dark.

“Stop it, Pete. Be nice to the man.” His buxom date chortled and snorted. Pete whispered something into her ear that sent her into a fit of hysteria. “You are the limit!” She could barely stand up straight while she playfully swatted him with fingers sticky from some horrid concoction she was munching on.

"No food inside, ma'am," came his monotonous drone. None of them had any couth or manners or self-respect.

"I'm done. You have it." And she thrust the box of junk at his chest. Instinctively he took a step back and his hand went to his left side under his arm, but there was no weapon there this time. The inedible crap spilled out of the box littering the floor in front of his feet.

"Now look what you've done."  She made clucking sounds that made her sound like an irritated chicken.  He expected her to bend over and peck away at the junk.

He was thinking plenty of other things too. Glowering at Pete he said, "Your carriage awaits."  Mockingly he gestured to the tram like the fawning chauffeur he used to be.

They got into the car snickering and bumping into one another. She collapsed into his lap and burst out laughing all over again. He slapped her shapely rump and planted a sloppy wet kiss on her over-rouged cheek.

He lowered the safety bar and gave the usual warning, "Keep your hands in the car at all times."

"Don't worry about my hands, Bud. They'll be otherwise engaged," Pete said adopting a phony British accent on the last two words and giving a squeeze to the woman's right tit. She squealed like a delighted pig.

“Oh Pete. You are the absolute limit!”

He released the brake and the car click-clacked its way down the rails and through the painted doors.

SNAP! He reached for the well-oiled monkey wrench he kept by his feet in case of a mechanical emergency. The heft of the wrench in his hand felt good.

“Off we go!” Their laughter trailed behind them like wisps of smoke from an extinguished fire.

Into the gaping maw of Hell. Bon Voyage, kiddos.

He called out to his partner. “Hey, Al. Can I take my break now? Got something to tend to.”

“Don’t you worry. This won’t take long at all.” 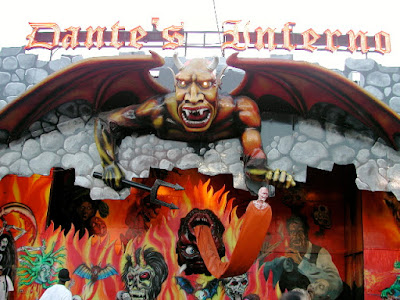