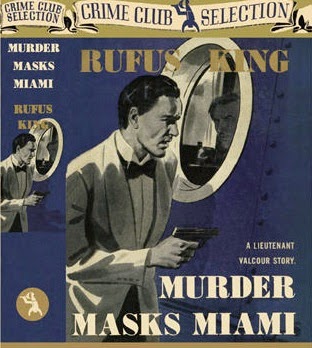 Lt. Valcour solves his last case in Murder Masks Miami (1939), Rufus King's contribution to the subgenre of mysteries known as the policeman's holiday. While on vacation Valcour is asked for help from the decidedly lazy and self-confessed incompetent Floridian Chief Detective Lawrence Goodfriend, a former salesman who "drifted into police work when [his family's] hardware store had gone for bad debts." Goodfriend is one of the most remarkably obtuse and vapid policemen in all of crime fiction. He confesses that the Miami police still have dozens of open homicide cases because "the training was lacking to build up evidence that would stand in court."  Even the rudiments of collecting evidence are lost on him and his associates. It's dumbfounding how lackadaisical he is about his job and his responsibility to the entire department.

So Valcour steps in. What at first begins as lessons and guidance to the Miami Police soon gives way to Valcour's leading the entire investigation. Two women have been found dead from apparent poisoning injected by hypodermic needles. One is the typical elderly imperious and domineering Grand Dame so often found in King's books. The other, found naked in an enclosed sunbathing booth on the roof of a nearby resort, is a much younger, sexually free, and equally unpopular woman. How the deaths are connected makes for part of the mystery. Valcour will uncover multiple adulterous affairs, a murderer with a taste for bizarre disguise, some unusual hazing rituals among sailors, and a very insidious method of murder. The clues are ample, the detective work is fascinating and the characters are some of the most varied and unusual for King who usually limits his suspects and victims to urbane sophisticates. 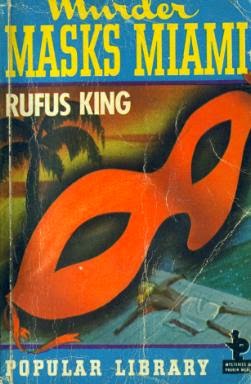 What is even more noticeable in this novel than any other of King's I have read is the writer's personal interest in male beauty and virility. Repeatedly the male characters' physiques and predilections are discussed in great detail. Mike Grost has mentioned on his website tracing the history of the detective novel that Murder Masks Miami is a homoerotic mystery novel, but I think that's going overboard. None of the men are attracted to each other. Though there are sailors featured in minor roles in the story there is not even the barest hint of male-on-male action in this story. It is clear that King was enamored with male beauty and liked to create characters who were both buff and gruff. Descriptions of masculine beauty don't automatically make a book homoerotic, a term I think that is frequently misused if not abused.

As early as the second chapter the reader knows he's in for more than a fair share of King's celebration of men. A middle-aged man wakes from his bed naked and walks to his hotel window to admire the seaview and doesn't a give damn who might see him below on the beach. It's an very odd scene and one you'd rarely come across in contemporary fiction even in our supposedly enlightened times. There is also Don, the handsome twenty-something lifeguard, whose body is described as rapturously as the older man's. Don attracts the attention of many women (not one man, mind you) and will serve as Valcour's key player in unmasking the killer in the climactic scene aboard a millionaire financier's yacht.

This is one of Rufus King's best detective novels. The story gets to the point quickly, its moves at a fast pace, never lagging in interest or local color. Valcour is less philosophical with his suspects than in the books from the 1920s, but spares no criticism for Chief Goodfriend, his unenthusiastic, somewhat thickheaded student in crime investigation techniques. The supporting characters are a lively bunch and every now and then King indulges in his arch sense of humor. In Murder Masks Miami you get the best of King on land and King at sea. But never confusingly at sea, for the story winds up with a satisfying and surprising conclusion. 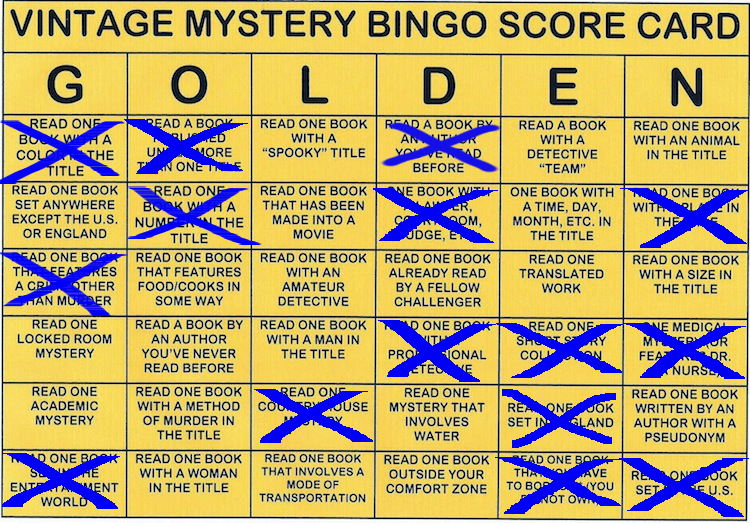