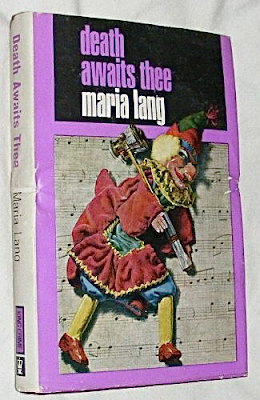 A warning before you proceed: If you've read the work of Maria Lang, recently made available to mystery fans one more time in the trio of English translations, and enjoyed her work prepare for a minor diatribe. Lang has been touted as the "Agatha Christie of Sweden" among other laudatory and hyperbolic sobriquets. I always take those marketing and critical assessments with a grain of salt if I don't entirely disregard them while rolling my eyes. But it usually indicates to me a slight understanding that the writer being compared to the Grand Master herself has a grasp on the traditions of the pure detective novel. My first sampling of Lang's work showed me she loves a mystery and aspires to greatness but falls short by a long shot. She understands narrative formula, detective novel conventions and motifs, and the quirkiness of bizarre puzzling murders and we get a lot of that in Death Awaits Thee (1955), originally published in Swedish as Se döden på dig väntar. Yet it all leads to a muddle and ends with a whimper, not the bang of surprise we all want from a detective novel.

First off, and granted this spoiled my enjoyment of the book as a whole, was the choice of translator Joan Tate to Anglicize the entire book.  Death Awaits Thee takes place in a thoroughly Swedish locale -- the very real Drottningholm Theater built in 1766, a marvel of Swedish architecture and European history and now a UNESCO World Heritage Site.  It's one of the only theaters in all of Europe that still retains original 18th century scenery pieces and restored hand-operated theatrical machinery of that era.  Photographs of the theater flood the internet, stories of visits to this historic place also appear by the hundreds in all languages.  It's worth trawling the internet and reading some of the better posts and articles if you have time.  With a murder mystery redolent of Swedish history and atmosphere one would hope that the book would stay thoroughly Swedish. But it hasn't. 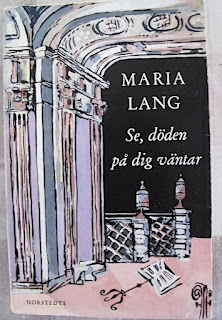 1.  All references to Swedish currency have been changed to pounds. What a hassle it must have been to convert the money amounts. Or did she even bother with that?  An amount of 800 pounds is missing during the story and is somewhat crucial to the plot. But is it actually 800 pounds?  Or was it 800 krona and the translator simply substituted pounds without bothering to calculate the British equivalent?

2.  The character names -- with the exception of Puck Bure, Lang's female protagonist and not-so-good amateur sleuth, and an opera singer named Jill Hassel -- have all been changed to easily comprehended British names.  This infuriated me.  For those interested the English names are Teresa, Diana, Stephen, George Geraldson (whose surname is also changed), Richard, Matthew and Edwin.  See the photo below for the real names Maria Lang gave her cast of characters. I found an online version of the original text from which I took several illustrations for this post. You can match the names to see how Tate robbed them of their real identity. I've typed the British substitutes above in the order they appear in the list below. 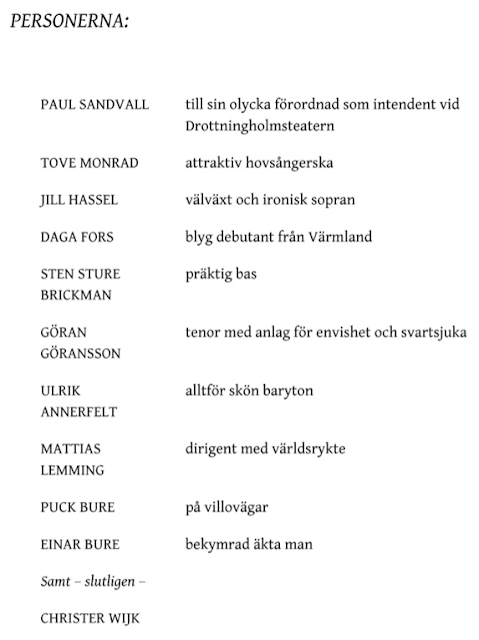 3. And this is the most upsetting part -- the translation itself is a pretentious Anglicization of awkward syntax, heavy use of British idioms and vernacular in the dialogue, and other elements that take you out of the Land of Lingonberries and Pancakes and transport you to the Land of Bangers and Mash.

In the long run Joan Tate and the editorial staff of Hodder & Stoughton have fairly ruined the book by wringing nearly all that is Swedish from its admittedly thin pages.

As for Lang's story it starts off rather intriguingly with a prologue resembling a mantra-like monologue in Puck's voice in which she looks back on the violence and mystery in a rather heavy-handed poetic style.  Then we are introduced to the characters who seem a lively bunch and reminded me of the kind of quirky types you'd encounter in a Ngaio Marsh theater mystery or the witty detective novels of Christianna Brand.  Christie didn't come to mind at all at actually.  The characters, however, become increasingly one note relying on a lone personality trait  to distinguish them from each other (raging jealous lover, foppish gay boy, tart tongued bitch, etc.). Most were entirely lacking in complexity or depth. Only a handful ever felt like real people rather than puppets being manipulated for the sake of the plot alone.

The plot concerning a production of Cosi Fan Tutte and a murdered opera singer, her body found crushed and disfigured in special effects device known as the "thunder machine," offers the reader a smattering of mysteries not the least of which is how was she actually killed and why was she carried up to the machinery-laden attic and shoved through the small opening of the effects device.  Motives are aplenty and tend to revolve around the impassioned and egocentric actors we find in theater mysteries. Jealousy, envy, hatred -- you name it, it's here.

But as for clues? Or the fair play aspect that one would think would be present given Lang's comparison's to her heroine and the writer she attempts to imitate?  Few and far between.  I can only recall two real clues! 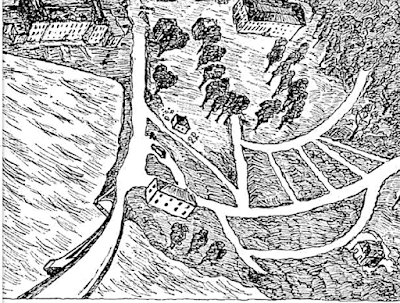 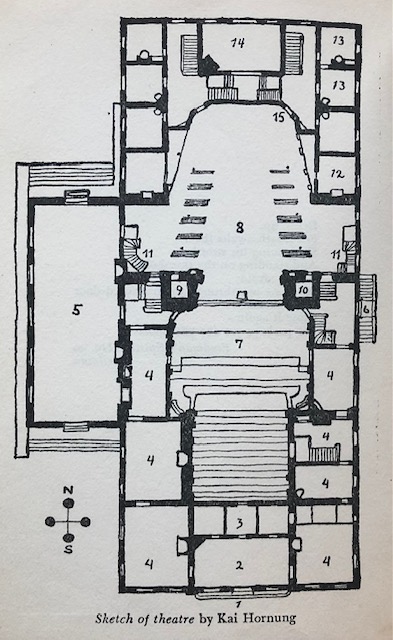 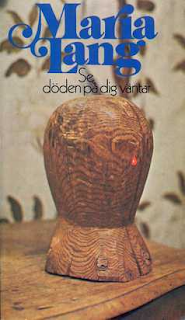 Too much of the story comes far too late in the book.  Prior to the arrival of Christer Wijk (surname altered to Wick in this "translation"), who appears only in the final two chapters, we are treated to intensive back story among the theater troupe and the rambling fantasies of Puck who is tempted to have an affair with Matthias Lemming, the opera conductor. The murder investigation is conducted by a non-series detective and his team. Then when Wijk finally appears he interrogates the characters for a third time (!) recalling the work of Carolyn Wells.  I wonder if Lang read any of her books.  In the end this felt more like a Wells novel than any other woman mystery writer Lang has been compared to. The suspects lie and withhold information just like Wells' characters and are coerced or manipulated into finally telling the truth when Wijk shows up.  He does no real detective work at all.  He relies on what his predecessor and police team have already done, notices discrepancies in stories, then simply gets people to tell the truth.  And like Wells' "transcendental detective" Fleming Stone, Wijk subsequently intuits and guesses using "psychology" to ferret out the murderer.  In the end the killer delivers a long confessional monologue, once again just like the majority of Wells' mystery novels. It's all disappointing, a real let down with all this questioning and re-questioning.

To be fair there are elements that I admired like when conductor and production director Matthias Lemming tells the full story about his volatile relationship with his ex-wife Tova, the murder victim.  I also liked the characters of Ulrik and Jill who were the most lively out of the bunch of opera singers.  Ulrik is Lang's token gayboy character and Jill is the mean-spirited bitch of the opera company.  I guess it's always fun for writers to indulge themselves and let go of their reins when writing these types of characters.  Lang certainly enjoyed those two for their scenes always enliven the tone of the book.

One of Lang's very modern touches is her inclusion of sexuality in her stories. Death Awaits Thee is the story of a woman who loved life and sex and apparently indulged herself with anyone -- male or female, young or old -- who struck her fancy.  Gay and lesbian characters appear in many of Lang's books (a lesbian couple feature prominently in her first mystery published in 1949) and sexual relationships are key to an understanding of the motives behind many of the murders in her novels. In this regard she is one of the pioneers in bringing murder mysteries into modern times. Had she really had skill as a novelist she might have become the Swedish forerunner of Ruth Rendell or Minette Walters. At times I thought of both of them while reading this novel, especially when Lang's mystery got down and dirty in revealing Tova's rampant sexuality and her disturbing secret that led to her divorce from Lemming.

Death Awaits Thee is the seventh Christer Wijk murder mystery, so it comes fairly early in Lang's career which spanned from 1949 to 1990.  If Death Awaits Thee is any indication of Lang's work as a whole then I'm afraid I'm not interested in reading any more as much  as she has been recommended to me by a couple of people I've met at mystery conferences and in emails I've received.  Those of you who read Swedish, of course, have all 43 novels to choose from. Those of us who only read English, however, have just three translations.  The others are Wreath for a Bride, aka Kung Liljekonvalje av dungen (1957) and No More Murders, aka Inte flera mord (1951). The most recent editions of these three English translations released in 2014 are available only as digital books from Mulholland Books. Alternatively, you can spend half a lifetime as I did trying to track down older editions in paperback and hardcover. They seem to be disappearing as the years fly by. But if those too are the translated and Anglicized work of Joan Tate then it's further justification for avoiding the books.

LEFT INSIDE: Ukrainian Politician Patronages the CPL (not!)

Usually this feature is about items I find in books from my personal collection.  This one, however, was discovered in a library book in the Chicago Public Library (CPL).  I thought it was so bizarre I had to share it. 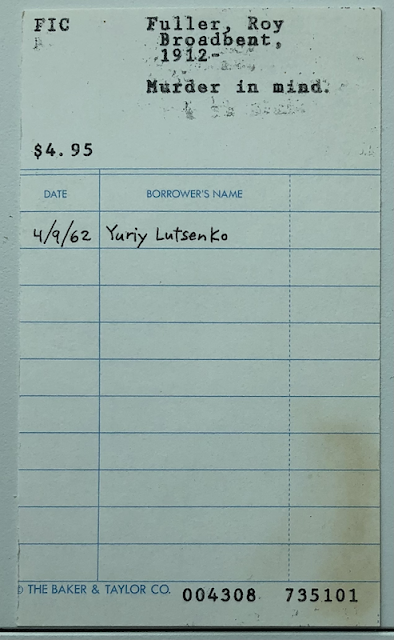 For those of you unfamiliar with the patron who supposedly too out this book here is a reminder from the omniscient source of all internet knowledge —Wikipedia. I'm simply cutting and pasting it with one bit of editing for clarification:

Lutsenko was also imprisoned for abuse of powers. Many nations objected to this calling it wrongful imprisonment and as one more sign of the actual abuse of power by Ukrainian Prime Minister Yanukovych. You can read about it all for yourself on various websites using the names of the men as search terms. Knock yourself out.

Anyway, made me laugh to think some oddball in Chicago thought it funny to make it appear that Lutsenko was a fan of obscure murder mysteries just as all of us are. The addition of wishing future readers enjoyment of the book was doubly amusing.  The significance of the date eludes me. Any guesses?

For the record, I didn't enjoy the book.. I stopped after 25 pages and returned it to the library. It put me to sleep. Literally. I was probably just exhausted that evening from my day job which is draining me on a daily basis these days.

More on Roy Fuller, the author of the book Lutsenko supposedly took out and read, and his side career as a mystery writer next week. 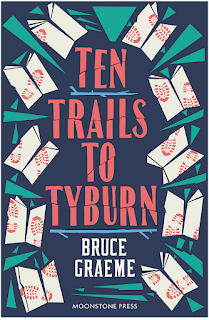 Last year is a week over and I hesitate to do all the "Best Books" kinds of lists.  Instead I thought I'd explain my absence from frequent blogging towards the end of last year as well as a brief outline of how I plan to return to the blog for this year. So here goes...A very happy 2022 to all of you.  May we all get what we hope for this year!