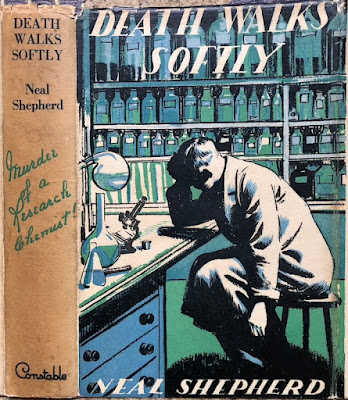 THE STORY: Inspector Michael Tandy makes his debut in Death Walks Softly (1938) an excellent example of three subgenres:  police procedural, scientific detective novel and impossible crime mystery.  Tandy using his expert knowledge in chemistry quickly disproves that a chemist supposedly committed suicide in his locked office, accessible by only one door and a private elevator that can only be summoned from the ground floor with a special key. Murder, theft and burglary are the many the crimes that arise in a complicated case involving professional jealousy and romantic entanglements. Heavy use of scientific detection makes for a dizzying yet fascinating detective novel.

THE CHARACTERS: The action is set primarily in a research facility where Robert Sherry, a reclusive anti-social chemist, was working diligently on two chemical formulas -- one for a universal solvent and another for stainless steel alloy that would be able to contain the solvent. Sherry has the use of only his left arm, his right having been amputated years ago.  He is found in his locked office with an injection mark in his usable arm and some Veronal found nearby.  Everyone in the company assumes he has committed suicide.  Tandy quickly asserts it cannot be suicide because 1. drug users addicted to Veronal do not inject the drug, it is ingested orally and 2. the injection was administered into the left arm.  Since Sherry is left handed and cannot use the artificial limb on his right arm as he would a hand with fingers he could not have injected himself.

Suspicion immediately falls on Mrs. Sherry who says her husband was more in love with chemistry than her and Daniel Lyne, the CEO of the chemical company. Lyne and Mrs. Sherry were carrying on a not very discreet affair.  Though the police know that Mrs. Sherry stopped by the office many times for visits, the CEO will not elaborate on the real reason. He is, however, quick to draw Tandy's attention to an embittered former employee Alan Talaver, who not only lost his job to Sherry but swore to kill him. When Tandy tracks down Talaver he turns out to be not only embittered but paranoid.  He volubly criticizes everyone at the chemical lab, rants about conspiracy theories and reveals a marked persecution complex.

One of the bits of evidence found in Sherry's lab is a thumb mark with a scar running across the print.  Talaver, surprisingly, is quick to show that he has such a thumb mark and offers up no real alibi for the night of the poisoning murder. Nevertheless, he maintains his innocence. This confession of sorts will lead to one of the most remarkable aspects of the murder mystery and recalls a similar incident in one of the memorable Carter Dickson impossible crime mystery novels

Then there's Frank Donegal, Sherry's lab assistant.  Donegal gives a fuller picture of Sherry's misanthropy and utter immersion in his work. He was also the only person with an apparently iron-clad alibi having been in an enclosed study room at the research library across the street.  Reading Cabinet #5, Donegal's favorite place to study, is located at the rear of the library and is constructed similar to a telephone booth. The reading cabinets are shown to be occupied by a red light on the outside wall activated when someone sits down and the door is closed. 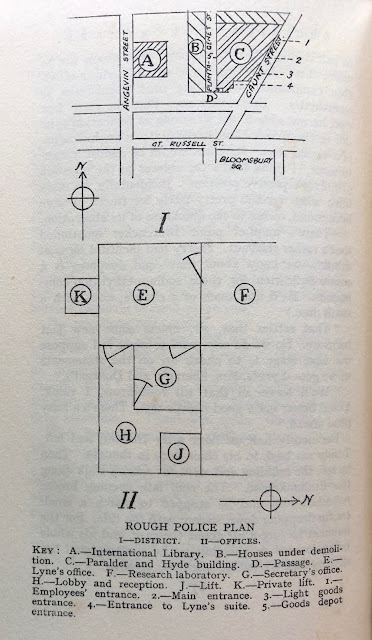 The impossibility of the locked room involves Sherry's office elevator that leads to a hidden doorway in the alley behind the lab building (see the plan at left). Oddly designed the elevator can only be operated with a key that summons the elevator from the ground floor to the office above.  The key must be also used to exit the elevator. Any time the elevator is used the car returns to the ground floor automatically. There is a lot of business about a load meter installed in the elevator that helps to save on the firm's electric bill. This portion sort of went over my head, but Nigel Morland in his "Neal Shepherd" guise certainly turned on his expert mode during this electrical engineering lesson. Tandy retrieves the time graphs -- basically reports of each instance the elevator went up and down -- in order to determine if the elevator was the murderer's method of escape from the locked office.

INNOVATIONS:  Tandy studied chemistry prior to becoming a police officer.  He mentions this to many of the scientists he interviews and it helps him to get some of the suspects to talk more freely and, of course, more expertly on the scientific aspects of the murder case.  There are several lectures on chemical alloy structures, the previously mentioned mechanical and electrical design of the elevator, the creation of plastic molds, chemical nature of poisons and a lot more. After one of these long lectures that goes on for nearly four pages (!) Sgt Bill Holland, Tandy's hero worshiping colleague, is astonished: "Holland's eyes opened wide. This was the type of detection he had hitherto believed existed only in detective novels."

Bill is right of course. But not in the ironic sense that Morland intends.  It is the kind of detection that exists only in detective novels and not ever in real life.  Rarely do real life criminals engage in the kind of guile and scientific trickery employed in this deviously constructed and often ingenious mystery novel. But this trickery is also what makes the "Napper" Tandy mystery novels so fascinating to read and mark them as stand-outs of the impossible crime and scientific detection subgenres at the tale end of the Golden Age.I hope to get three of these novels reprinted by the middle of next year. Unfortunately, I have not been able to locate an English language copy of Death Rides Swiftly though I do have the other three.  But I have not given up my search for that elusive fourth title.

Reprints Looming on the Horizon 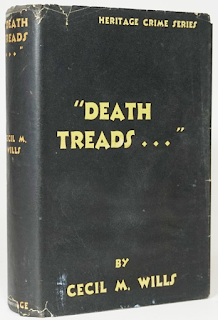 I was hoping that I would be able to give you some wonderful news about a few reprints, but alas there are delays with one exciting reprint that was supposed to be out this fall.  Some of you may have already discovered that it's in the works if you've been out there a-Googling.  But I promised the publisher not to promote it until the rights are officially cleared and it's taking some time.  But rest assured the book will be here, just a bit later than planned.  Assiduous readers will find more details in a recent comment exchange at the bottom of a past post on said book.  I will say no more until I'm allowed to.

However! Don't get your panties in a bunch, gang.

There is other exciting news I can announce -- Cecil Wills detective novels are coming back!

Those lovable rascals who run Ramble House have teamed up with yours truly and they will be reissuing two rather scarce, very early Wills mystery novels featuring his series detective Geoffrey Boscobell. Both should be out by the end of this year, possibly sooner.  Author in Distress, Will's debut mystery  novel and the first with Sgt. Boscobell, will be the first released followed shortly thereafter by a new edition of the third Boscobell mystery novel Death Treads.  Plans are to reissue both as retro mapbacks the way many of the early Ramble House detective novels and mystery novels paid tribute to the highly collectible original Dell Mapbacks back in the early 2000s when RH was first reprinting Golden Age mystery fiction.  With artwork by Gavin O'Keefe and partly inspired by the maps and floor plans found in the original books I have provided these promise to be attractive new editions.  I'll be writing up a brief study of the Boscobell detective novels as a foreword to both new editions. 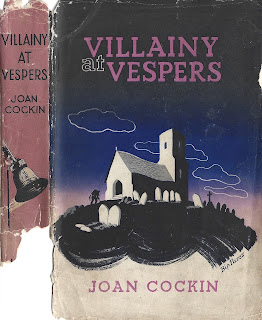 But that's not all, kiddos!

Galileo Publishers -- the same fine company that reprinted Clifford Witting's mysteries and will continue to do so over the next couple of years -- have secured the rights to the extremely hard to find mystery novels of Joan Cockin.  Her quirky detective novel, Villainy at Vespers, about the arcane art of brass rubbing, smuggling and bizarre murders was reviewed here at PSB back in February 2020.  All three of Cockin's detective novels starring her policeman Inspector Cam are planned for release over a two and half year period.  Villainy at Vespers will be the first. I believe it comes out in the fall or around Christmas.  It will be followed by Curiosity Killed the Cat (actually the first of the three mysteries) and end with Cockin's  highly elusive (dare I say rare?) and last mystery novel Deadly Ernest.  I've never seen a copy of that third book in my lifetime and I'm eager to get my hands on a review copy. 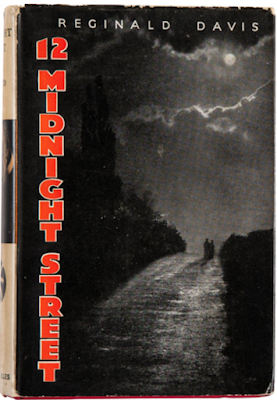 After years of thinking about creating my own imprint it's finally happening.  If all goes well Pretty Sinister Books will burst forth into the indie press world with the complete works of forgotten American writer Elma K. Lobaugh in the coming months.   I also have plans to reissue the nearly impossible to find detective novels by the highly original, utterly inventive, deliciously witty and thoroughly bizarre Reginald Davis. The line-up will then focus on dozens of under-appreciated and overlooked early 20th century American mystery writers whose books have languished in the Limbo of Out-of-Printdom for too long.

So much to look forward to as we head into the dog days of summer and autumn wends its brisk breezes and falling leaves our way.