Dance to Your Daddy - Gladys Mitchell

When you're dealing with one of those hit-or-miss writers like they say Gladys Mitchell is, one of the those "acquired taste" writers, it's best to stick with the hits. That way you're sure to keep coming back for more. Dance to Your Daddy (1969) is one Of Gladys Mitchell's hits. Best of the 60s, they say. I'd agree.

Compared to her earlier work it's clear that Mitchell changed with the times. This book is very modern and told almost exclusively in dialogue. The sometimes ponderous prose passages of her books published in the 1930s-40s are at a minimum. She opens with an unusual scene that establishes character in only a few sentences. From that point on she continues to nail her characters in sharply written often terse portraits. Action is plentiful and swift and Dame Beatrice (no longer Mrs. Bradley!) is on stage 90% of the book. She may be cackling less often and she doesn't poke anyone in the ribs even once, but she's still the wily Mrs. Croc readers have grown to love and admire. Armed with sharp wits, acerbic humor, and in a couple of scenes her trusty revolver she tackles a murder victim of questionable identity, a will with convoluted legacies that almost puts Jarndyce vs. Jarndyce to shame, and plenty of scheming and plotting to outdo the best of the Victorians.

From the very start Dame Beatrice alludes to the melodramatic aspects of the case she has undertaken at the request of her distant relative Romilly Lestrange. "The situation here is fascinating, macabre and in many ways incredible," she tells her secretary Laura Menzies Gavin. "I am living in a world of Sheridan le Fanu, Edgar Allan Poe, Wilkie Collins and the Brontes." She has been asked to verify the sanity of Trilby, Romilly's niece, who has taken to throwing objects off a cliff into the ocean, dresses in baroque costumes and to all outward appearances seems to have lost her mind. The young lady is on the verge of turning twenty-five and will soon inherit her grandfather's wealthy estate, but if she can be proven to be mentally unfit the estate defaults to her uncle. Her grandfather Felix' will is a lot more convoluted than that, however. I'll spare you the other conditions.

A brief interview with Trilby (who insists her real name is Rosamund) leaves Dame Beatrice questioning the truthfulness of both Uncle Romilly and his dually named niece. Completely different stories, denials on Rosamund's part, counter denials from Romilly which are backed up by the stories of his housekeeper/paramour Judith. Are they keeping Rosamund prisoner as she claims just like some doomed heroine from a Victorian sensation novel? Do they have evil designs on her? She fears for her life and claims a few murder attempts have already occurred. Who is to be believed -- uncle or niece?
﻿﻿
The plot is a mix of the usual Mitchell staples -- absurd and bizarre antics, a body that no one can identify, an unusual setting and landscape features (in this case the body discovered on the Dancing Ledge, a perilous seaside ledge below a precipitous cliff) that add to the menacing mood, and her unique brand of black humor. Once again a wicked villain tries to send Dame Beatrice to an early grave but her sharp wits and devious mind save her. On hand are also some of her recurring characters including Dame Beatrice's barrister son Sir Ferdinand, and her secretary Laura, now married with two children. Even Laura's parents make a brief appearance when Dame Beatrice in order to prevent another murder, decides to stow Rosamund at Laura's Scotland home for safekeeping.

The book opens with the baptism of Laura's newborn daughter Eiladh, a child she mentions more than once that was not planned for nor wanted. Ah, motherhood! Laura does her best to escape her maternal duties leaving the baby in charge of Hamish, her elementary school age son, and husband while she assists Dame Beatrice. She doesn't get in on as much of the action as she hopes. Laura is tart tongued, petulant and overly sarcastic throughout the book. She wasn't very welcome for me this time. But everyone else in the cast does a fine job, whether villainous or virtuous or a combination of both. The surprising finale is typical of Mitchell's sometimes ambiguous resolutions and her unusual ideas about justice.

Dance to your Daddy has been out of print for decades and was until last month very hard to find. Luckily, this title along with 59 others (including all of Mitchell's books written under her "Malcolm Torrie" pseudonym) have been released by Amazon.com's book publishing imprint Thomas & Mercer. As of last month Dance to Your Daddy is available in both paperback and eBook formats. Most of the Mitchell reprints are only available in digital format for now. There may be the possibility of paperbacks for some of the other titles. Residents of the UK (and anyone living outside who wants to have the books shipped) are luckier. A variety of paperback reprints of Gladys Mitchell's mysteries are available from Vintage Books. See their list of 29 titles here. This is a great way to introduce yourself to the world of Gladys Mitchell.

She may be hit-or-miss according to many critics (me included) but Dance to Your Daddy,  a cleverly plotted, lively story with a cast of engaging characters is definitely among the hits, my friends. Grab your copy now!

Other Gladys Mitchell books available in new Thomas & Mercer eBooks include these titles that I also highly recommend: Here Comes A Chopper (reviewed here), The Rising of the Moon, The Devil at Saxon Wall, The Twenty-Third Man, Brazen Tongue, St. Peter's Finger and The Greenstone Griffins. 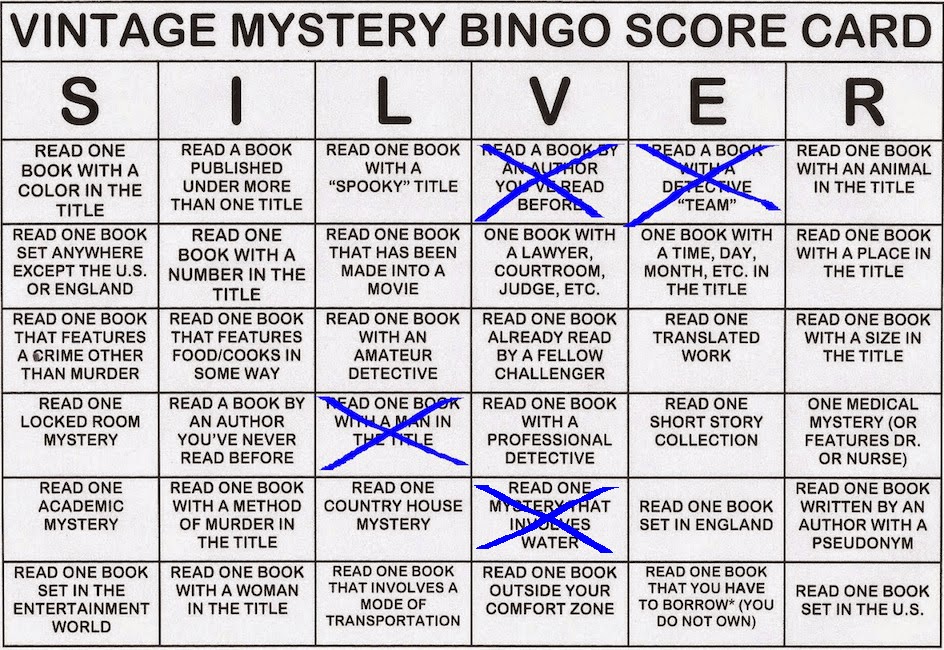 Reading Challenge update: Silver Age Bingo Card, space V5: "A Mystery that Involves Water" In this case the water is the Atlantic Ocean sweeping over the Dancing Ledge.
Posted by J F Norris at 10:28 AM