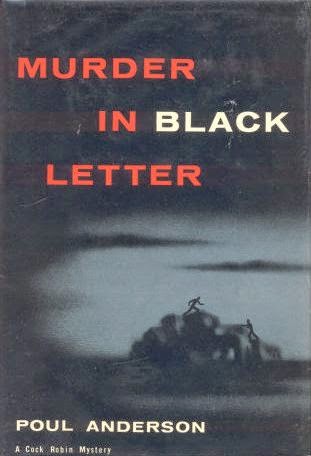 On the inside of the DJ front flap Murder in Black Letter (1960) is billed as "A New Trygve Yamamura mystery." Yamamura, a Norwegian-Japanese-American private eye, is a unique character in crime fiction. He has a splendid collection of samurai swords (the main interest in his award winning debut Perish by the Sword, 1959), he enjoys fencing and judo, and spends much of his time engaging in intellectual conversations with his mostly academically employed friends. But here’s the thing. Yamamura is hardly in the book at all. In fact, he doesn’t even solve the case. He's the most minor of characters in his second book, but he's billed as the lead on the dust jacket. If you’re going to create a series character at least do him the service of having him solve the case even if he’s only going to have a limited amount of stage time. Anderson seems to have grown tired of Yamamura in only his second appearance. Too strange.

The story has a great plot element about a missing manuscript dating back to the Italian Renaissance. The murder victim, Bruce Lombardi, had been working on translating the text and had discovered all sorts of ties to witchcraft and black magic and the death cult of the Borgias. Does the motive behind the murder have anything to do with this intriguing, possibly dangerous manuscript? No. It’s all incidental background.

The book is narrated by Robert Kintyre, professor of Renaissance history and expert on Machiavelli. When his graduate student/teaching assistant is found brutally murdered and bearing wounds that indicate gruesome torture Kintyre turns sleuth and does his best to get to the bottom of the puzzling crime. But in his amateurish imitation of a badass crimefighter he endangers the lives of others and is directly responsible for a second murder that seems gratuitous and senseless even within the confines of this insular academic community. Kintyre keeps thinking he should tell the police what he knows but suffers from the Hamlet syndrome of deliberating and meditating too much on his thoughts and never acting on them. I have no problem telling you that the villains turn out to be involved in a drug operation and the real culprit had hired a bunch of thugs to do all his dirty work. Shades of pulp fiction master criminals? No, instead it’s wholly contrived for the sake of a twist in the final pages.


And speaking of the final pages. The ending is rushed and absurdly over the top with a fight in a rocky seacoast. Hero and villain plunging from a cliff into the turbulent ocean and grappling with a revolver while trying not to drown. Kintyre manages to judo chop the gun out of the villain’s hands and subdue the bad guy. All of this in the ocean! The final sentence in the book is a single word. “Enough.” I’ll say!

That’s strike three. And strike four, five and six, too. You’re out, Anderson. Really out.

The book has a protracted storyline with a few tangential subplots that are dropped almost as quickly as they are introduced, preposterous motivations from nearly everyone involved, and plenty of action scenes featuring judo (chop, chop) for martial arts freaks. But it’s all a bore. All too reminiscent of too many books and TV shows of this era. It’s all been done before with more excitement and vigor by veteran crime fiction writers more skilled than Poul Anderson, primarily a science fiction writer. His attempt to capitalize on popular crime fiction themes (drug lords and sadistic professional criminals as villains) is ineptly handled. The intersection of a primarily academic setting populated with professors, their office and research assistants, and graduate students with a seedy underworld of professional criminals just doesn’t work. I can usually allow for wild leaps in my suspension of disbelief. This time I didn’t believe it for a minute.