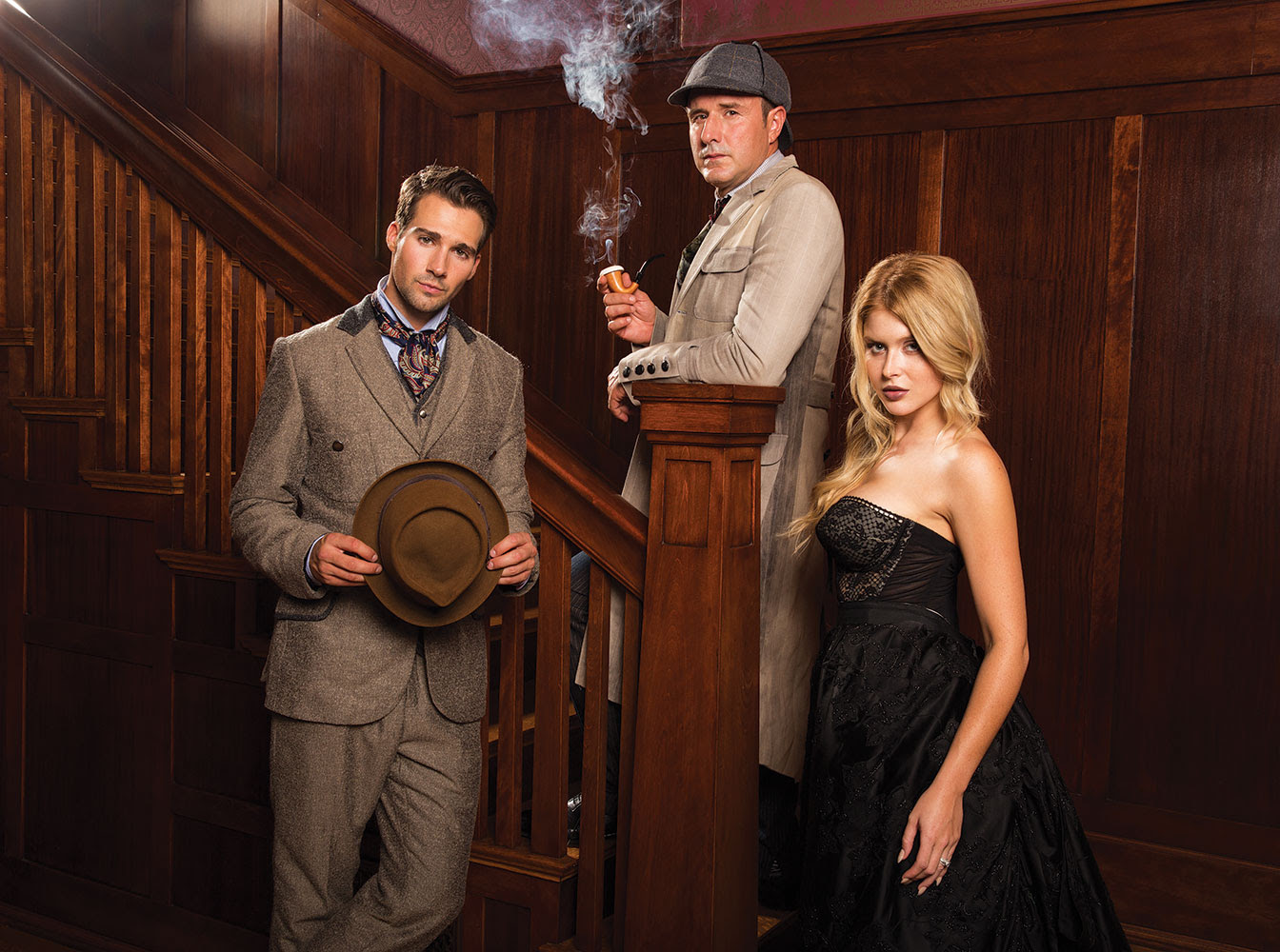 In his own words David Arquette admitted that he is an odd choice for Sherlock Holmes, but for me the entire conceit of this uneven production is the odd choice. An amalgam of melodrama, parody and groaning "breaking the fourth wall" gags this schizophrenic production of a new treatment of the Holmes canon never really knows what it wants to be. Add to the mix an array of different performance styles, turgid dialogue with speeches handled ineptly by unskilled actors more suited to vaudeville comic turns than delivering long winded speeches that require verbal dexterity and vocal flexibility and you have the makings for a very tiresome evening. Greg Kramer's script does its best to celebrate Holmes, his prowess as a detective and tries to honor the adventures as written by Conan Doyle with several clever allusions like mentioning The Sign of Four several times and subtitling one section "The Man with the Twisted Hip", however, in the hands of director Andrew Shaver the production is burdened with inept direction in the dramatic sections and weighed down with silly, groan inducing gags in which the actors comment that they are on stage performing a play.

David Arquette not known for his work on stage (though his Playbill bio tells us he has a few Broadway credits under his belt) does his best with a role he is entirely unsuited for. He uses an odd voice deeper than his own tenor register that he has obviously worked very hard on. In his effort to maintain his British accent he shouts all of his dialogue at his fellow actors as if they are all deaf. Not once do we get any shift in colors or tone in his voice. He declaims ever line whether it is an egotistical pronouncement or a confidential aside in a stentorian faux baritone. At times his persona of the arrogant and vain Holmes gives way to a quirky mischievous imp. When he scampers about the stage with arms waving about as if he has no bones or flops lazily onto the chaise longue crossing his legs almost femininely we are reminded this is the giggling nervous David Arquette from the Scream movies and not David Arquette trying to be Holmes.

I was not impressed with James Maslow as Dr. Watson who is far too young in appearance and demeanor nor did I find Renee Olstead as the damsel in distress interesting in the least. The less said about the actor playing Inspector Lestrade the better. I won't even mention his name to spare him the embarrassment. Horrid work -- one of the most bombastic, utterly unfunny, "comic" interpretations of Lestrade I've ever seen. His character belonged in a farce not this show. Just one example of an acting style that didn't mesh with the rest of the people on stage.

The story involves Professor Moriarty and Sebastian Moran (enacted with delicious villainy by two of the best actors in the show: Kyle Gatehouse and Graham Cuthbertson) in a confusing plot of two murders related to the anti-opium movement and some law trying to be passed in Parliament. Historically, there was an attempt to eradicate the opium dens and control the sale of opium based drugs in Victorian era England when this play is set, but the real battle against opium and the successful laws passed didn't take place well until the early part of the 20th century. The parallels with contemporary medical marijuana laws are easy to see. Still, Kramer find s it necessary to hammer home his point by making jokey references as when Moriarty quips "Who would ever want to outlaw a plant?" It's this quasi-hipster, anachronistic and self-aware tone that repeatedly takes us out of the world of Holmes. In the hands of unskilled director Shaver it makes for an uneasy night at the theater.


The real star of the show is set designer James Lavoie. To accomplish the challenging task of depicting the dizzying number of locations, both interior and exterior, that fill the stage in this invigoratingly paced, action filled show Lavoie has resorted to tall sliding walls and projections. As the story unfolds the sliding walls become wallpapered rooms, a study with a blazing fireplace, sooty brick lined alleyways, and a dockside with reflecting water. At several points in the show the characters take hansom cabs not seen but only suggested by the tightly placed bodies of the actors and their bobbing movement while the projections behind them give the illusion of the cab rapidly travelling through the mazelike streets of London.

For those unfamiliar with the actual stories or those modern viewers who find his method of ratiocination and miraculous powers of observation more absurd than awesome this touring production of Sherlock Holmes might make for an entertaining night out. But for the true devotees of Conan Doyle's iconic fictional character this production is best to be avoided.
Posted by J F Norris at 11:33 AM 5 comments: