THE STORY:  Four women make a pact to bring to justice the murderer of their dear friend Lizbeth More who stabbed on Halloween after a terrifying night of a poltergeist encounter and a visit by a bizarrely masked individual peering in through the windows of More's home.  Years before Lizbeth's fiance Arthur was also stabbed to death, on the night before they were to be married. As there was little evidence Arthur's murder was never solved and his killer is is still at large. Are the two deaths related and were they committed by the same person?  Chief of Police Patrick O'Brien investigates and receives more than ample help from a trio of amateur sleuths.

THE CHARACTERS:  The Women Swore Revenge (1946) is divided into multiple sections in which the story is told from one character's view point, either in first person (Mary and her policeman husband) or third person (amateur sleuths Malo Wrenshurst and Patience Wilbor).  Although the title and blurb on the US edition's dustjacket imply that the four women who make their pact will turn sleuth it really is only two of them who become amateur detectives even going to extremes by assuming alternate identities. Mrs. Wrenshurst, a community theater actress, goes so far as donning a wholly unnecessary disguise complete with dowdy wardrobe, turban and wig. They have, as Wilkie Collins coined in The Moonstone caught a "severe case of detective fever." And they do remarkably well in their roles. A third sleuth is Michael Penchard, Lizbeth's gardener, whose flight from town triggers a police search and fuels gossip that he is the killer. Actually Penchard has left town to follow someone he believes is the true murderer. By sheer chance he and Malo Wrenshurst will meet up in a seedy hotel in Boston where the two will trade stories and share evidence they have collected.

The amateur detective scenes are rich with detail. In fact the entire book is overflowing with lush details on how homes are furnished, what the gardens and grounds of those homes look like, lists of the flowers and trees that seem like catalogs, and painstakingly described layouts of how rooms in the houses are arranged. So it's no surprise when Irwin turns her pen to action sequences that they too are elaborately described. Her writing is as exact and focussed as a cinematographer's camera. Malo's keen eye finds a locket embedded in the vines that have covered the doorway to an abandoned icehouse. Mike's eyewitness account tells of a strange "flying creature" swinging from branches in More woods like some kind of Tarzan wannabe. Patience travels to upstate New York and does a thorough search for the true identity of Whiting Vane, a polio crippled antique collector and mystery man who lives near the Mores. All these and more are highlights in this engrossing detective novel. 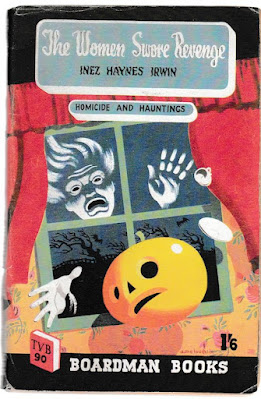 ATMOSPHERE: The More house has a history of being haunted dating back to the late ninetheeth century.  Legendary and written accounts tell of poltergeist activity with dishes and glasses being smashed, paintings falling from walls and furniture being overturned with no person anywhere in sight. Lately the poltergeist has started up its mischievous destruction again mystifying Lizbeth and frightening her two female servants. The oddest part of this haunting is the appearance of figures dressed in old clothing. They take the shape of four old women on their knees praying. On two separate occasions these figures turn up mysteriously in rooms previously unoccupied. Irwin handles these scenes with a deft hand and manages to pull off a genuinely creepy atmosphere. Most of her misdirection works, but some more astute readers may see through Irwin's deceit.  Still, she succeeds in making it seem as if some supernatural force is at work. The descriptions of the grotesque face at the window turn truly horrific when it is discovered what exactly that mask at the window really was.

As the various detectives delve into the past we learn that some characters have carnival and circus work in their past. Gossip turns to the possibility of a circus performer being the murderer. And the fact that all the victims in the book are stabbed in the back had me immediately thinking of my favorite Golden Age motif - knife throwing.  This coupled with the presence of a crippled character had me spinning an elaborate scheme of how the murders were accomplished and who the killer was. I was close, but there was no way I was going to come up with the truth because I fell for some of Irwin's misdirection that even a novice reader of detective novels might have discounted. Irwin pulls off a genuinely surprising resolution that borrows from the insane ideas of Harry Stephen Keeler coupled with nightmarish plot twists reminiscent of horror writers of the pulp magazines. She won major points with me for her grotesque touches.

If there is anything to fault this highly imaginative, spooky and macabre Halloween mystery it is the unnecessarily lengthy wrapping up of the various mysteries.  For reasons known only to Irwin she has O'Brien gather the survivors and the innocent characters to deliver a typical Golden Age detective novel lecture that explains everything. But over 75% of the lecture has already been told to us by other characters earlier in the story. And those present know everything that O'Brien is telling them!  All that O'Brien needs to tell these characters (and the reader, of course) is the motive for the murders and the explanation of the poltergeist and the thing at the window.  I confess that I skipped over many paragraphs in this irksomely rambling penultimate chapter.  Also the last section is improperly named for one character when it should be named for Patrick because his is the primary point of view not the person for who Part 9 is named. Ah well. Despite these quibbles the book still has a corker of a mystery plot. 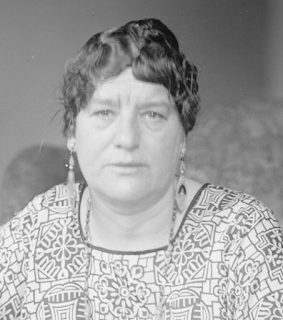 THE AUTHOR:  Inez Haynes (1873-1970) was an active member of the women's suffragette movement and an avowed feminist her whole life.  She is best known for her early 20th century non-fiction writing on women's rights, women's biography as well as some feminist novels notably Gertrude Haviland's Divorce (1925). Her first works were published under Inez Haynes Gillmore her name when she was married to Rufus Gillmore, journalist and mystery writer who diehard fans may know for his Van Dine pastiche The Ebony Bed Murders (1932).
Haynes divorced Gillmore shortly before the onset of World War 1 but continued to write under her married name.  In 1916 she married Will Irwin, another journalist and sometime novelist, who astonishingly also wrote murder mysteries. His two detective novels star Rosalie La Grange, a medium/con artist turned sleuth. Irwin used these novels as a vehicle to voice his distrust and skepticism of the spiritualist movement. The Irwins lived in Europe during WW1 and both were war correspondents for English language newspapers.
In addition to her feminist works Haynes wrote Angel Island (1908), an allegorical feminist fantasy (some call it science fiction but there's little science to it); a series of children's books about Little Maida, a girl who is raised by her wealthy father after her mother dies; and the five detective novels featuring Chief of Police Patrick O'Brien. Interestingly, her detective novels are set in the fictional town of Satuit, based on her life in Scituate, Massachusetts where she and Irwin spent most of their summers and where Haynes settled after her husband died in 1948. 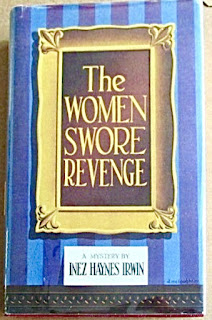 THE SERIES:  The Women Swore Revenge (1946) is the fifth and final detective novel Irwin wrote featuring Patrick O' Brien and his wife Mary. Once again, I chose to read the author's last book first at some cost.  Two previous cases are mentioned in passing, one was getting so detailed a I skipped over the entire section for fear that Irwin would reveal too much. I'm discovering more and more that some writers never thought over this particularity bad habit of possibly spoiling previous books as they continued to add to their characters' adventures.  So a warning that anyone interested in tracking down Irwin's mystery novels that it would be a good idea to read the others first before you get to this final book. However, be warned:  Murder Masquerade (1935), the first in the series, is a very young and naive book completely different from The Women Swore Revenge which in comparison is highly sophisticated. The difference in tone and writing is remarkable. I can only surmise that Bennett Cerf who was editor at Random House shaped up Irwin as a writer when she was under contract to his publishing house. But more on Irwin's early mystery novels and her books as a children's author which seem to have influenced Murder Masquerade when I review that book next month. 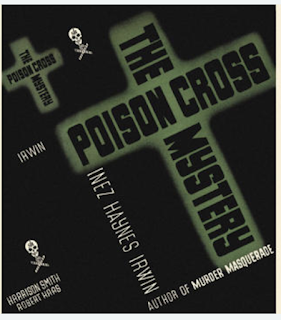 Winners of Pray for the Dawn giveaway... 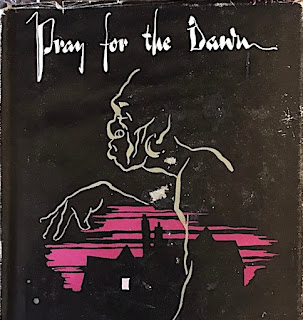 The winners of the two copies of the new Ramble House reprint of Pray for the Dawn were chosen entirely at random using our arcane method of colored tokens and coded entrant names.  And they are:

I've already emailed each winner and I eagerly await your replies.  The sooner I get your address the quicker I can put your book in the mail.

Congratulations to the lucky winners. And thanks to all for playing.