GIVEAWAY: Pray for the Dawn Released! 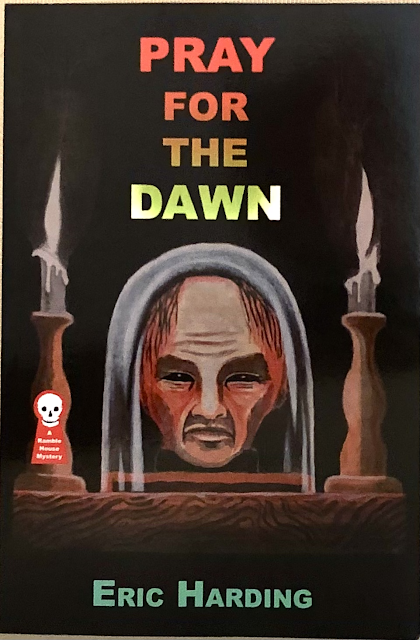 Two book giveaways in one month?  What is the world coming to?  (BTW, there was almost a third,...but I'm saving that one for October) For that matter what is this blog turning into?  Seems as much as I've eschewed all forms of social networking, I've succumbed to what the internet does best and become yet another self-promotion marketing machine, my friends. Sorry to disappoint.

I'm happy to hear from at least one of the previous book giveaway winners that the last prize, a copy of A Case for Solomon by Bruce Graeme, proved to be:

"...brilliant. Apart from being a true bibliomystery, it also pulls off one of the best plot surprises/twists I have come across. Thank you for introducing me to such an inventive and innovative series."

And I can assure you that Pray for the Dawn is just as innovative and surprise filled. Just released from Ramble House last week the new edition of this EXTREMELY scarce book is available nowhere for free online and has never before been reprinted until this year  Here's your chance to win a brand spanking new, hot off the laser jets, copy.

Those who may have read my rave review back in April already are prepared for pulpy horror, genuine thrills, and paranoid ravings from terrified characters who are trying to survive the weekend in creepy house on an isolated island. Paranoid and terrified because they are at the mercy of a murderous and apparently revived corpse. And it's a detective novel to boot!  What do you need to do to win a copy? Just this...

Leave a comment and name your favorite mystery about a group of strangers stranded somewhere at the mercy of a crazed killer. I have two copies and will award one each to two different people. This new edition with an attractively gruesome cover illustration by Gavin O'Keefe also comes with an informative and amusing Afterword by Yours Truly done in a suitably offbeat Ramble House style of banter and wisecrackery.

LEFT INSIDE: A Variety of Bookplates

Pandemic boredom led me to amassing about three boxes of books (most of them still not read) and I noticed in reorganizing them and cataloging them that many had some intriguing bookplates.  And here they are for your viewing pleasure... 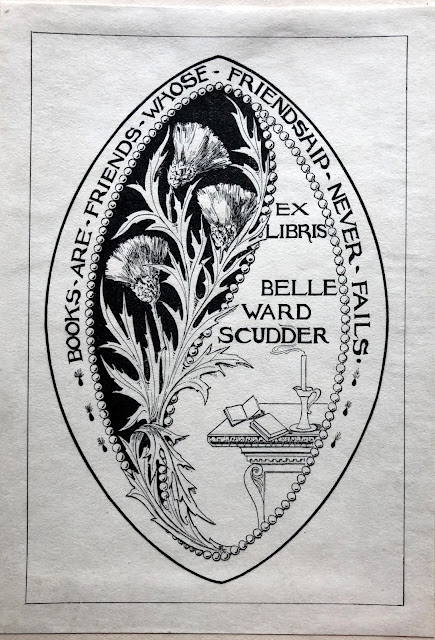 This woman was married to an optometrist in Ohio. There are various Scudder family trees found on various genealogy sites. But when I stumbled across a medical association book I found online I found out the entire family history of this particular Scudder family. She was born in Iowa in 1870, lived in Chicago and settled in Ohio. Her first husband died in 1900 and apparently she married the guy's younger brother, also a doctor, in 1909 when she was 39. 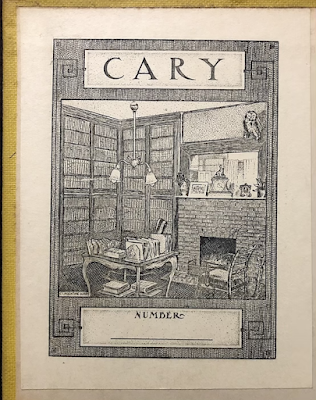 Over ten years ago I bought several books from this man's library when they were initally offered on eBay.  Apparently many of them are still floating out there among the many used booksellers because I bought this one only a few months ago. 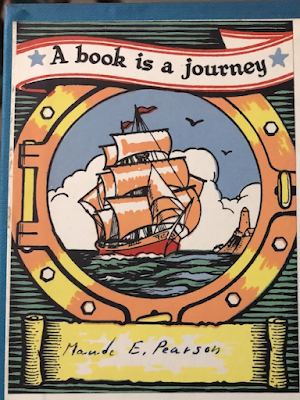 One of the many popular bookplates from the famed Antioch Bookplate Company in Yellow Springs, Ohio.  I've seen multiple copies of this bookplate in dozens of books (from obviously various owners) I've either owned or perused over the past twenty years. 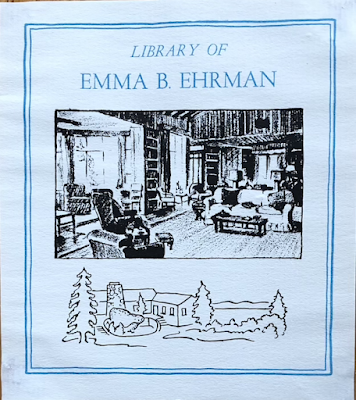 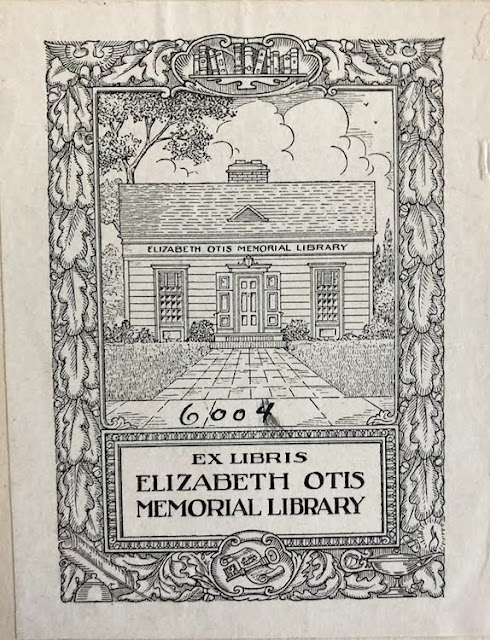 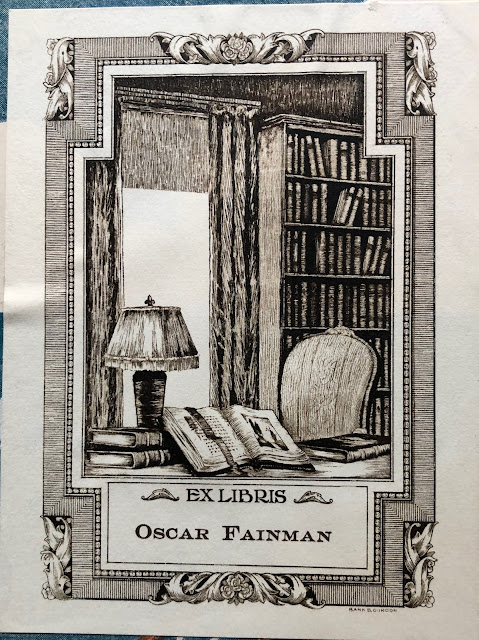 Over the years I've owned several books form Oscar's library also. Quite a reader of mystery and adventure fiction.  This is also a popular bookplate design as I've seen it many time in various books. 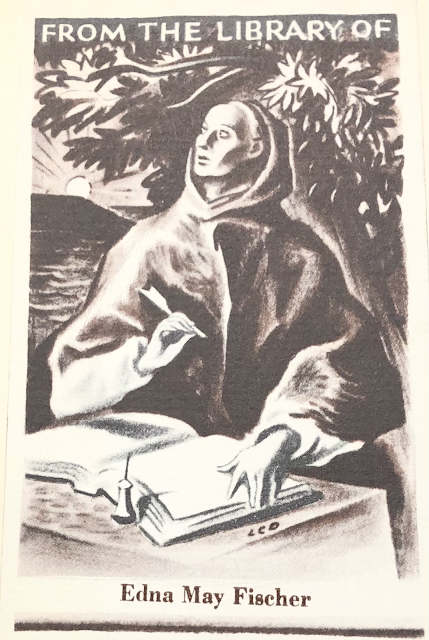 I wish I knew who this artist was.  I see the initials LCD at the edge of the book. 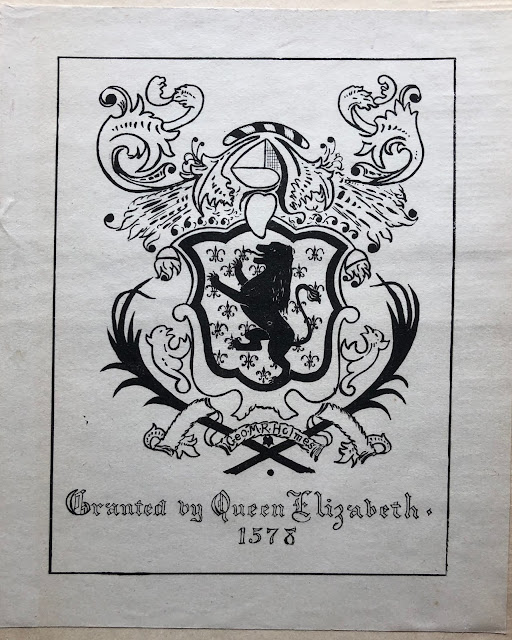 This is a mystery to me.  George M.R. Holmes' name appears in a small banner beneath this ornate heraldry symbol, but I'm completely at a loss to understand what was granted by the Queen. 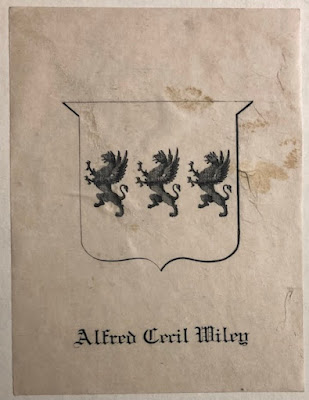 Another coat of arms, but rather simple compared to the Holmes one. 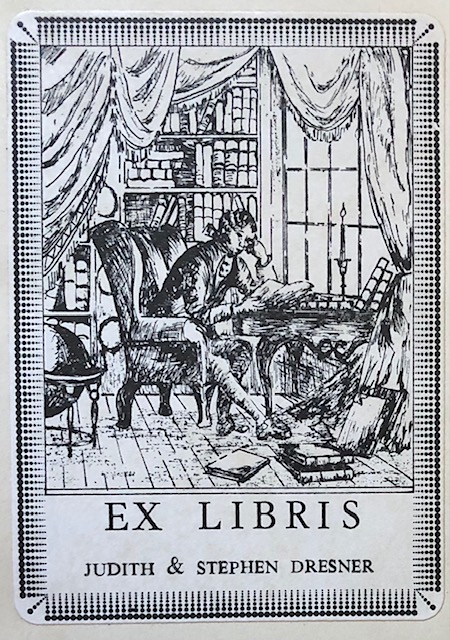 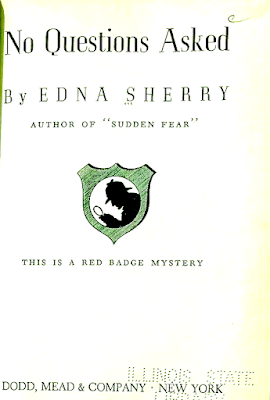 Police procedural gives way to domestic melodrama then morphs into a full blown cat-and-mouse thriller in No Questions Asked (1949), Edna Sherry’s sophomore novel in name only. No “wise fool” at all Sherry shows the hand of a master in her second crime novel by expertly plotting two simultaneous storylines that converge in a thrilling climax putting two rival cops practically at each other’s throats.

Steve Lake is a veteran cop, now captain of a homicide squad in Manhattan. As the story opens he is in charge of a murder investigation that smacks of Russian spies and stolen documents a triple combination that is sure to threaten “The American Way.” As if that wasn’t enough on his plate Steve is beginning to question his young wife’s fidelity when he catches her in multiple lies about how she has been spending her afternoons. Early on we get pitch perfect sampling of urban cop detection when in showing how Steve’s inherent mistrustfulness is infiltrating his home life Sherry has the cop trap his wife with easily proven misstatements about what happened at the horse track she claimed to have visited. Sherry must have loved horse racing for this is the first of three crime novels to feature that pastime so popular throughout the late 1940s and into the 1960s. So upset is Steve with Vicki’s obvious and flimsy lies that he begins to follow his wife to find out what she’s doing when she claims to have taken a train to Belmont betting on horses that don’t even exist. When he sees Vicki in the company of a Slevna, a well-known concert pianist and the man who has been tutoring her musician brother, Steve is enraged. Not so much angry that his 22 year-old wife is cheating on him, but furious that she’s doing it with a man old enough to be her father.

Mistrust leads to paranoia which in turn gives way to wild imaginings based on this one eyewitness account of Vicki seen with Slevna. Soon Steve Lake finds himself contemplating a violent revenge. But as with most revenge plots in well written crime novels -- and this one surely is -- the spontaneous plan, ostensibly foolproof in Steve’s crazed mind, backfires spectacularly. As the law of crime fiction irony would have it Steve is also faced with the outrageous coincidence that Slevna is involved in the murder and subsequent corporate espionage his team is investigating.  More than that basis for an intricately constructed and intriguing plot ought not to be revealed.

Sherry’s novel is a brilliant mixture of multiple subgenres, a well-oiled machine of suspense and complex conflicted characters. Steve is enraged with jealousy on one page then overcome with guilt on the next. His snarky and mean spirited lieutenant, a bully of a rival back at the station house, is an opportunistic cop eager for the captain’s desk at the start of the book then morphs into one of Steve’s allies by the end. Vicki is torn between telling her husband the truth and continuing with her weakening deceit. The novel is also an intriguing study of the tacit policemen’s code of honor and what cops will do for one another when one of their own is implicated in behavior that could ruin his career and life. In that regard this book is more timely than ever and might be cause for debate among those highly critical of such unwritten and questionable ethics.

No Questions Asked would have made an excellent film or TV episode. Brimming with cinematic details, excellent characters, and the requisite twisty plot peppered with unexpected moments this is a second novel that shows a real pro at work. Some enterprising Hollywood type ought to get a hold of this still resonant and suspenseful novel and could make it as memorable as Sherry's debut novel Sudden Fear that in its cinematic adaptation garnered four Academy Award nominations. With only two books under her belt Sherry's reputation as a solid crime novelist was firmly cemented in the annals of crime fiction history. She proved to be a contender with later novels Tears for Jessie Hewitt (reprinted by Stark House Press just this year), Backfire and Girl Missing, the last of these three being one of the most widely praised of her later novels. 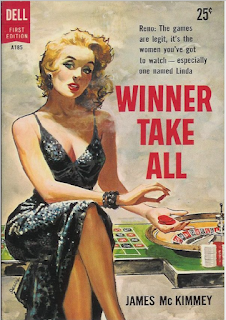 Chosen using an extremely unscientific but completely random method here are the winners of last week's book giveaway. May I have the envelope please? And the free copies of A Case for Solomon go to...

1. Allan H
2. Eric
Please email your name and preferred mailing address by clicking here
Thanks for playing! Congrats to all the winners.
Posted by J F Norris at 12:00 AM 2 comments: 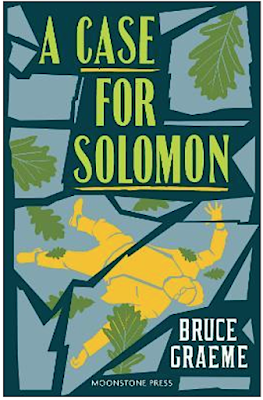 What makes September a happy month? Another book giveaway, of course.

As announced last month A Case for Solomon, the third of Bruce Graeme’s Theodore Terhune series of detective novels and reprinted by Moonstone Press, has been released. I received my box of books a few days ago and I’m offering two copies in a giveaway.  That's right -- two copies!  One copy each to two lucky people.

Terhune reviews a courtroom transcript of a 20 year old murder trial over the course of the novel and uses the transcript as if it were a literary work, gleaning clues as to the personalities of those testifying based solely on their speech and language as recorded in the court documents. To enter this giveaway, just leave a comment below and mention your favorite courtroom detective novel. If it’s been out of print for decades you might want to mention that and I’ll see what we can do to get it back in print. I’ve been rather successful on the front lately.

This contest is open to readers in USA, Canada and UK. I’m afraid all other parts of the world are affected by significant mail restrictions or delays that are too worrisome for me to risk mailing anything from the US. I’ve read all the warnings from the USPS website and as of August 26 airmail delivery, especially to Australia and New Zealand, is too unpredictable. If you live in either country I apologize that you miss out again.

Anonymous comments will not be eligible. Please make sure that you leave your name or some sort of ID when you leave your comment. If you win you will be responsible for emailing me your name and mailing address. Runners-up will be selected if I do not hear from winners within three days.