Two books that were eligible for Best Vintage Mystery Reprint of the Year were the first English translations of decades old Japanese mystery novel. I read both in December and while I perhaps would’ve nominated one of them (but not both) someone else beat me to the one worthy of the award. Each is an example of fantastical plotting techniques that make Japanese detective fiction both admirable and infuriating to a diehard fan. 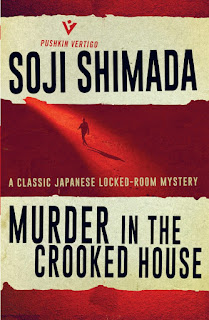 First let me tackle Murder in the Crooked House (1982) by Soji Shimada. Shimada wrote the brazenly audacious The Tokyo Zodiac Murders which I read decades ago long before it was reprinted. It’s a perfect example of the new vein or “orthodox” Japanese murder mysteries that incorporate puzzles into detective novels. And in this case the word incorporate is literal.

But these puzzles are not baffling aspects of the case they are the entire reason the book and story exists. To the Japanese mystery writer and those who devour this very specific type of detective novel a puzzle is a puzzle is a puzzle. Nothing else really matters. The solution to The Tokyo Zodiac Murders is in fact something I came across as a teenager in a puzzle book which has nothing to do with killing or murder. It is a simple tangram puzzle. What Shimada does is both ingenious and utterly perverse in how he adapts the puzzle as part of his solution to his murder mystery.

Similarly, Murder in the Crooked House is nothing but a puzzle. While not inspired by a tangram the plot does incorporate a ridiculous idea – that someone would construct an entire house in order to obtain murderous revenge. The reader must not only suspend disbelief and enter a wholly fantastic universe, but must accept that someone would find it necessary to spend thousands of dollars (or yen, I guess) and well as investing several years of their life in carrying out this vigilante style retribution for a decades old past wrong.

Admittedly, the revenge plot that is years in the making is a timeworn detective novel motif. This is not what I take exception to. In mystery novels like The Tragedy of X and Thirteen Women, where a revenge plot may have been the product of monomania and taken years to plan and reach fruition the murder methods are fairly simple. It is the motive that is unknown to the reader and detectives. This is the puzzle that must be worked out.

And granted there is an entire subgenre of detective novels where the murder method is baffling to the police and this creates much of the gameplay, so to speak, as the reader tries to match wits with the detective in the story. Both are trying to figure out not so much the whodunnit aspect of the crime but the howdunnit.

In both examples the puzzle is an aspect of the crime or crimes. It does not encompass the entirety of the story, it is not the raison d’être. Murder in the Crooked House is not really a detective novel at all. It is a series of puzzles with one overarching puzzle that serves as the pièce de résistance. This is not what detective fiction is about; it is an unfortunate consequence of stressing, practically worshipping, form over substance. In the case of Murder in the Crooked House form, in all its contexts, is everything -- the architecture of the fictional house becomes the architecture of the plot. Once the reader is presented with the preposterous reasoning of the murderer and the full outline of the various murder methods, however, the house's true purpose is revealed and as a direct result, ironically, the story simply collapses. There is no satisfaction in having arrived at the end and discovering that the characters were puppets, the motive was cliché, and the house itself was one gigantic murder method dying to carry out its landlord’s diabolical wishes.

As some wise guy might say in an American pulp novel when presented with one of these absurd impossible crimes: “Pulling a trigger would’ve been faster and helluva lot easier.” 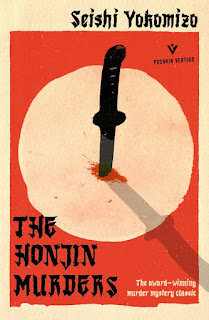 On the other hand a Japanese detective novel can present us with a puzzling murder, done in a bizarre manner and still be entertaining to read, fun to match wits with the detective, and leave the reader with a the satisfying feeling of having read a true novel populated with complex people with human emotions and understandably sound motives. The crimes may be bizarre but there is an inherent logic about why they appear bizarre or why the method had to be baroquely constructed. This is the success of The Honjin Murders (1948), a thoroughly Japanese mystery steeped in the culture and mores of pre-WW2 era Japan with characters who behave according to both their own personal code of honor as well as Japanese custom.

The added bonus is that the book is a homage to the entire detective novel genre with one character an avowed mystery novel collector and reader of the “classics”. Our mystery writer narrator (the voice of Yokomizo himself I am assuming) also reminds us of his own knowledge of Western novels like The Red House Mystery and The Murder of Roger Ackroyd.

This is a genuine detective novel with interesting characters, while some like the matriarch Iwoko are eventually consigned to the background and the elder daughter is entirely absent from the plot, there is never any doubt that we care about the fate of the Ichiyangi family. Kosuke Kindaichi makes his debut in The Honjin Murders shining in genius-like form as he figures out just how the newlyweds were killed in the locked room on their wedding night and who did the deed. Along the way are the added multiple mysteries of what was found in a cat’s grave, a gruesome discovery in a charcoal kiln, koto strings being plucked by invisible hands, and a katana sword found embedded in the snow-covered ground with no footprints surrounding the site. 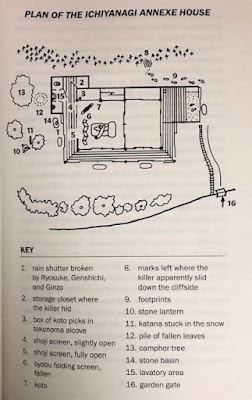 Coincidentally, we are treated to another story in which architecture is featured in the plot. The history of the honjin, the specific architecture of an annexe house (see plan at left), the importance of sliding shutters and tatami mats and folding screens are all spelled out in fascinating detail. In truth none of this is necessary to understand how the story unfolds, why the murders took place or why the method was so complex. What is important here is the search for truth not merely the solution of puzzles. What Yokomizo does so skillfully and artfully is tell us a story of a family plagued with secrets and slowly reveals this to us.

As a debut novel The Honjin Murders is not without flaws. There is an odd Victorian Gentle Reader touch in the narrative. Some of the plot revelations are misplaced and lessen the suspense and overall effectiveness as a novel. But there is much at stake in this story and there is poignancy as well as surprise in the finale.

It should be noted that Yokomizo tells his complex and affecting story in under 200 pages while Shimada’s turgid book comes to 350 pages full of puzzles but not much mystery. Narrative economy is more attractive and often more artful.

Both books are available from Pushkin Vertigo (here and here) and both are translated by the gifted Louise Heal Kawai who does an admirable job of blending contemporary styled dialogue into the Japanese flavor of the narrative sections. In the case of The Honjin Murders much of the narration often reads like miniature history lessons and Kawai makes it both intriguing and easy to understand. In my case she had me eager to learn more…and I did.
Posted by J F Norris at 2:33 PM 10 comments: