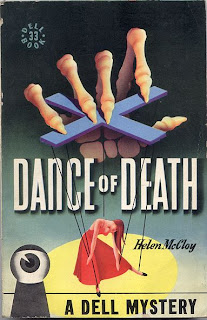 I was surprised to find that very little is written about Helen McCloy on the various crime fiction blogs. I have always felt that she has been overlooked and to a certain extent ignored as someone who was rather pivotal in the development of the modern crime novel. Her detective, Dr. Basil Willing, is one of the earliest of the American fictional detectives to incorporate scientific and clinical explanations for the psychological motives of a killer. More importantly her books are cleverly constructed detective novels that are excellent and entertaining examples of an American mystery writer showing mastery of the fair play technique.

Anthony Berkeley was one of the first to pioneer the psychological facet of the modern crime novel. He eschewed the usual emphasis on physical evidence of the crime and instead focused on the victim in the crime. He said in a dedication to E.M. Delafield that he hoped she would appreciate his attempt "to substitute for the materialism of the usual crime-puzzle of fiction those psychological values which are ... the basis of the universal interest in the far more absorbing criminological dramas of real life." After all, the truly interesting thing about any murder is why the person was killed in the first place not what kind of cigarette ash was left on the floor of the crime scene. But unlike McCloy he did not quote or employ the work of scientists and psychologists as aids to the detective in arriving at his solution. His detective Roger Sheringham was a mystery writer with an acute insight into human behavior. All of his pronouncements were not so much scientific as they were based on observations and inferences.

Shortly after Berkeley's first foray into the psychological detective novel, The Wychford Poisoning Case, was published in 1926 other writers started to explore the same territory. Some to great effect, others managing only minor success. In England Gladys Mitchell created Beatrice Bradley, an avowed Freudian psychologist, who delves into the psyche of the criminals in what are largely parodies of the traditional detective novel. In the United States Charles Dutton, who began as a pulp writer, wrote about murderers whose psychopathology I am sure was incredibly disturbing to a reading audience of the late 1920s. Helen McCloy entered the crime fiction arena in 1938 with an impressive debut that not only tackled the idea of psychology in detective novels but scored a couple of touchdowns in the process. 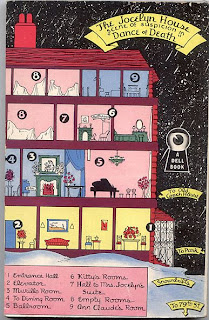 Dance of Death introduces Basil Willing, a psychiatrist who consults with the New York Police Department after having a fairly successful practice treating shell shocked war veterans. The novel opens with a scene featuring sanitation workers who are clearing the streets after a snowstorm. One of them uncovers the body of a young debutante buried in a snow heap. At first it seems as if the novel is going to be yet another treatment of the impossible crime – the body is extremely warm and the face is stained a bright yellow two things that seem incredible after being buried in snow. The plot gets even more strange when another young woman bearing a striking resemblance to the corpse comes forward to tell a fantastic story right out of the Sherlock Holmes canon. She was asked to impersonate the dead girl at a debutante ball and the following morning was treated as if she were actually the girl she impersonated. It is here that the book begins to emphasize the psychological approach to crime solving. Willing is asked to be present at the woman's interview to determine if she is sane or not. Her relatives insist she is Kitty Jocelyn, the dead woman, but she claims she is Ann Jocelyn Claude, Kitty's cousin.

As the story progresses Willing and Inspector Foyle will carry out numerous interviews and visit the home of the dead girl. At each interview Willing points out a "blunder" or fault on the part of the person being interrogated. Foyle is more concerned with evidence and fingerprints. Willing tells Foyle that he too is concerned with fingerprints but of an intangible kind:


Blunders, like dreams, are messages in code. By decoding them we are able to eavesdrop on the unconscious and get at the truth. For no one can control his blunders any more than he can control his reflexes or his dreams. [T]he blunders a suspect makes, the things he drops, and breaks and forgets, his stumbling and stuttering might tell the psychologist as much about his mind as the marks on a bullet tell the ballistic expert about the gun from which it was fired.

He also discusses his theory that nothing is ever really accidental at all. 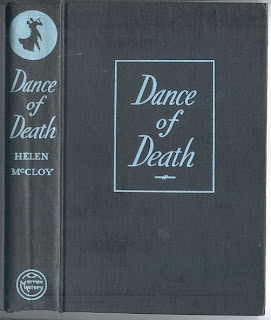 These "psychic fingerprints," as Willing calls them, will manifest themselves frequently in a variety of ways: slips of the tongue, nervous manner in speech, absent mindedness, mention of "lost" items. Foyle makes an apt pupil for at the midpoint of the book he presents Willing with a list of nine blunders that puzzle him. Willing astounds him by explaining nearly every one of them as they relate to the crime. Only one of the blunders continues to puzzle him until the book's finale.

There have been other fictional detective of this era who call themselves psychiatrists or psychologists. Dr. Eustace Hailey in the novels of Anthony Wynne does an awful lot of probing of the psyche with plenty of elaborate didactic lecturing, but more often than not he seems like a droning pedant. Little of what he says is easily understood. Beatrice Bradley likes to indulge in Freudian psychobabble as well, mostly in her early appearances, but also makes up an awful lot of her "theories." To me, at least, much of what Mrs. Bradley says seems not only outdated but prejudicial rather than soundly psychological.

Willing, however, speaks in everyday language (primarily because he's talking to an unsophisticated policeman) making his psychological tools and observations easy to swallow in what may seem like large doses. He also uses the theories of established scientists in the field of psychology and openly refers to them by name. Dudley Schoenfeld, who used similar tactics when assisting police in identifying Hauptmann during the Lindbergh kidnapping, is mentioned frequently in Dance of Death. Schoenfeld's theory of the unconscious mistake being a large clue to hidden motives provides the springboard for the turning point of the case in this novel.

Apart from all this emphasis on psychology the book has a really modern tone to it. From the scientific knowledge the murderer uses in poisoning Kitty Jocelyn to the crazed popularity of the diet pill employed as a murder weapon; from the fawning over magazine endorsed miracle pills to the deeply disturbed motive of the murderer -- all of the details in the story still have resonance seventy plus years later. When I finished the novel I felt as though the book could serve as a script for any of the latest TV crime shows. Most especially the plot and Willing's investigative style reminded me of the methods of Vincent D'Onofrio's police detective and the plots written for Law & Order: Criminal Intent. Rarely did it feel as if I was reading a book written in the late 1930s. McCloy is to be admired for being something of an oracle in choosing a timeless topic and presenting her story in a manner that did not date her work. 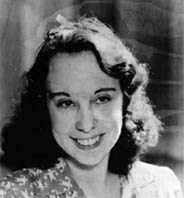 UPDATE: I was using the oldest Hubin bibliography when I copied out the Basil Willing titles and I missed two books. Also I should've added the dates of publication so they're up now.
Posted by J F Norris at 8:08 PM