Here's another unusual bookplate that was lightly glued inside one of my books.  I removed it and placed it in my ephemera collection several years ago.  My pencilled note (barely visible in the upper left corner) says it came from an R. Austin Freeman book about Dr. Thorndyke.  Can't remember the exact title. Strangely, though, I do remember that I bought that book in an Evanston (northern suburb of Chicago) used bookstore. 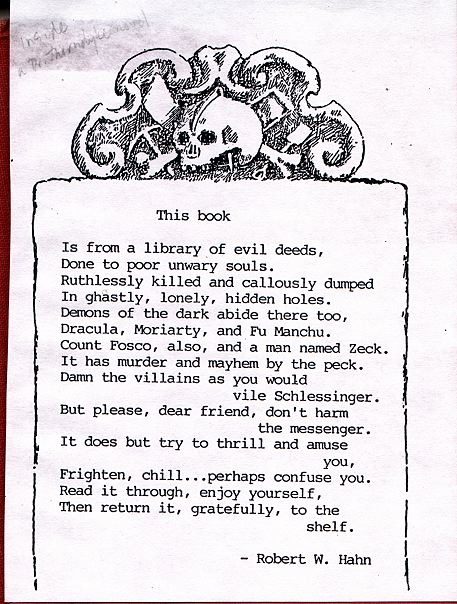 The author/owner was a local man here, apparently a noted collector of mystery and crime fiction.  He was also involved in the mystery book convention scene back in the 1970s.  Through the miracle of Internet search engines I  discovered he was one of the organizers for Bouchercon when it was twice held Chicago.  Have no idea if still lives in Chicago or Evanston or indeed if he is still alive.

I recognize all the characters mentioned in the verse, but shamefully had to Google the name Schlessinger.  I don't know my Holmes as well as I should.
Posted by J F Norris at 12:37 PM