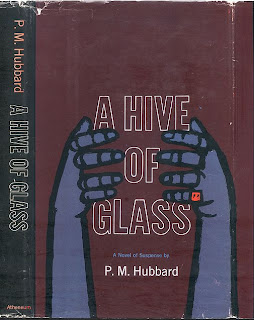 When does a hobby become an obsession? What events can tip the scales and cause a collecting mania to become a dangerous monomania? There is one book in the crime fiction world that is an intricate study of antique collecting gone maniacally wrong and it has haunted me ever since I first read it. That book is P.M. Hubbard's nasty and violent A Hive of Glass.

I have read many of Hubbard's books, but this one really hit home with me. I confess that I'm a book collector of the maniac variety and I recognized much in the rabid thoughts and feelings expressed by the book's narrator. Thankfully, I have never resorted to theft or murder (nor do I ever plan to) in order to acquire an object that sets my eyes and heart ablaze with the collector's drooling need to possess. The same can not be said of Johnnie Slade, the protagonist in A Hive of Glass. He is the kind of collector you never want to encounter in your life.

Within the first few pages we know that Slade will pretty much stop at nothing to acquire his object of desire. His particular fancy is 18th century glass. He rhapsodizes about the fine work exhibited in this kind of glass in a near orgiastic paragraph in the first chapter. He cheats an ignorant junk dealer out of a particularly fine example and nearly clobbers the poor man on the head with a pewter mug when the dealer realizes he's been duped. Too late, though. Slade already paid for it and is out the door pursued by two young men the dealer enlists to try and retrieve his prize.

No sooner has Slade got this latest addition to his collection but he learns of the existence of a true treasure. An Italian tazza (kind of a cake stand) by a master craftsman of the 16th century. He gets the name and address of an old man who has vital information about where the tazza can be found. When he arrives at the old man's home, he finds a dead body. Has someone already committed murder in order to get the tazza? When he meets Claudia James at an auction house he gains a new obsession. It is a deadly combination of lust for the flesh and lust for glass that will lead Slade to ruin.

The Maltese Falcon touches on the same theme of lusting after a valuable treasure. But Hammett never gets into the psychology of collector mania. In Johnnie Slade Hubbard has created a borderline sociopath who confesses that his love for glass objects has utterly consumed him. At one point he realizes that although it seems he may never actually get his hands on the tazza or ever possess it he cannot allow anyone else to have it. Slade is sorely underestimated by his rivals also in pursuit of the tazza. It is to their dire misfortune that they do not sense Slade's envy and avarice are more than mere sins; they are his driving lifeforce.

Hubbard's later work increasingly emphasizes place in a way that makes his books very much modern Gothic novels in the true sense. Setting and place become whole entities, an additional character to some extent, imbuing the atmosphere with dread and sinister foreboding. There is only a faint hint of this Gothicism in A Hive of Glass and that is in the household of Claudia's Aunt Elizabeth and in some of the weird scenes that border on the supernatural.

Hubbard was a master at inserting bizarre sequences into his books that just like the old 18th and 19th century Gothic sensation novels shift the book into high gear shock mode. One such sequence follows a dinner date with Claudia where Slade accidentally hits a deer with his car. We know how he feels about death from a previous encounter:

I cannot stand dead and broken things. I do not know what started this, but it goes a back a long way. It is not quite the same as the fairly common thing about blood, though blood makes it worse. It is the deadness. It seems odd when I have a good deal of violence in me.

Slade is incapable of removing the deer from the road or even extricating it from his car. Claudia is left to clean up the mess and she proves to be something of a bloodthirsty Fury. In a bizarre, almost supernatural, moment a fierce and ravenous dog comes tearing out of the woods to claim the deer carcass. Claudia does battle with the dog using a piece of the deer's broken antler savagely bringing the dog's life to an early end. This is the woman Slade has fallen in love with. They will make quite a duo in the remainder of the book.

For its complex and fascinating character of Johnnie Slade, the equally intriguing supporting cast, the weird incidents and overall Gothic atmosphere you would be hard pressed to find a creepier thrilling read than A Hive of Glass. And if you're a collector at heart, I guarantee after reading this book you will do a little closer examination of your own lust of objects and do your best to keep it in check.

For more on P.M. Hubbard's life and work I strongly recommend this excellent article at Mystery*File.
Posted by J F Norris at 11:30 PM