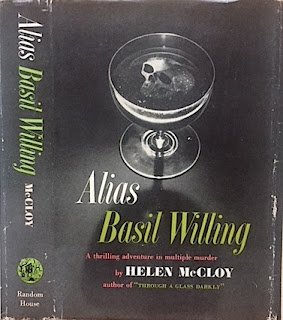 THE STORY: Dr. Basil Willing encounters a man claiming to be him when he stops in a local cigar shop for some cigarettes. Intrigued he follows the impostor in a taxi. He ends up at a dinner party of the prominent psychiatrist, Dr. Zimmer. At the party Basil learns that one of the guests, Katharine Shaw, knows him and has hired him to do something for her -- or rather she has hired the man pretending to be Dr. Basil Willing. Confusion follows when the fake Basil shows up and both eventually leave the party headed for a restaurant where Basil intends to uncover why the man is pretending to be him. But the impostor suddenly dies, apparently poisoned by codeine, yet not before uttering a cryptic phrase; "And no--bird--sang..." Basil needs to solve several mysteries, including two murders, and find out if he was in fact the intended target of a killer.

THE CHARACTERS: The party guests make up the majority of the cast and of course provide us with a large pool of murder suspects. Basil must help the police interrogate all of the party goers a as well as the host Dr. Zimmer and his sister Greta Mann who lives with him. Over time Willing discovers that most of the guests are also Zimmer's patients and that the dinner parties are held regularly as part of Zimmer's unconventional treatment plan. Zimmer disapproves of typical Freudian psychoanalysis which he says relies on "the passive dream-side of the mind." By observing his patients in a social setting he can study the patient "in his most completely active, conscious state--when he is reacting to the people in his life." But Basil begins to see a strange pattern in the behavior of the guest/patients and is troubled by this odd style of psychiatric treatment. 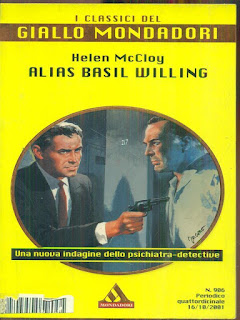 Typically for McCloy most of the characters come from Manhattan's elite society and the stand-outs in the cast include the amoral Rosamunde Yorke, who was acquainted with Basil prior to his marriage to Gisela; Stephen Lawrence, an aged and ailing poet and his neurotic daughter Perdita; and the warring married couple Hubert and Isolda Canning. The Cannings allow McCloy a chance to skewer post-WW2 American life in this couple grown tired of each other and living in a sterile "modern" apartment done up in the latest trends of personality-less interior decoration while drowning their sorrows and anger in numerous bottles of booze and cocktail glasses. They are a sad couple and the portrait McCloy paints is as ugly a commentary the highbrow high life as you will find in her books.

INNOVATIONS: Perhaps the only reason one should read this book is the motive for the crimes. I was reminded of a forgotten novel by Guy Boothby called The Woman of Death and an equally forgotten short novel by Robert Louis Stevenson as it became clear to me what was going on at Zimmer's home. It's a terrifying notion.

The detection in the novel, however, is also a highlight and recalls some of McCloy's finest work in her early career. Alias Basil Willing (1951) comes almost exactly in her mid-career and is one of her last genuine detective novels before she turned to suspense and psychological thrillers in the 1960s. The clueing is fair play with teasing classic gimmicks like ambiguous initials in a cryptic diary entry, a dying message, and a devilish murder method. This time, however, the clues consist largely of intellectual and literary references that may have some readers crying "Foul!" If you're a fan of Innes, Crispin and other literary-minded detective novelists, then you may enjoy Alias Basil Willing all the more. There are ample references to romantic poetry including Keat's Gothic masterpiece "La Belle Dame Sans Merci" and a very obscure Victorian short story collection called Mrs. Lirriper's Legacy (more on that in the "Things I Learned" section below). Kipling and Coleridge are also quoted at length, but it is Keats and a writer named Charles Allston Collins whose work provide the biggest clues to the solution. Students of British literature will truly have a field day with this particular murder mystery of Helen McCloy.

QUOTES: Here are two examples of McCloy's prose. Both are fine examples of character descriptions. The first ends with an unusual metaphor I envy. The second is absurdly arch yet perfectly suited for the pseudo-sophisticate McCloy is describing.

Basil had spent too much time in hospitals not to see at a glance that Stephen Lawrence was a man chronically ill. [...] It wasn't altogether a matter of frail body, sunken cheeks, thinning hair and faded blue eyes. It wasn't even the lightness of this breathing, the slowness of his motions and the gentleness of his manner. It was rather his singularly sweet-tempered smile and his look of detached serenity. He was like paper which has burned away so slowly that the dead ash retains the shape of solidity yet actually is so fragile that it will crumble to dust at the first touch.

Charlotte fumbled at her jabot and detached a long, slim, Italian lorgnette, silver worked in a repoussée design. Daintily she peered though the lenses at the grubby scrap of paper.

THINGS I LEARNED: Bizarre vocabulary word of this book: fissiparous. The sentence was of no help to me: "When the fissiparous process was completed Basil found himself beside Yorke." The definition is "inclined to cause or undergo division into separate parts or groups." Its root is the noun fission. I would have chosen a simpler synonym or just use "break-up" and forget about the adjective. McCloy does like to show off her erudition quite often. Basil recalls a book called Mrs. Lirriper's Legacy which he claims is the work of Charles Dickens. This is only partly true, as the book is a collection of short stories by a variety of writers. The story he is talking about is really by Charles Allston Collins, a painter and writer, who coincidentally married Dicken's daughter. Originally written as Christmas stories in the magazine All the Year Round during the mid 1860s each tale is related by one of the lodgers in a boarding house run by Mrs. Lirriper, sort of a Canterbury Tales of the Victorian era. The second story in the collection, "A Past Lodger Relates a Wild Story of a Doctor," is the one Basil recalls. The main character and what he does are direct echoes of the action in Alias Basil Willing. Remembering the story leads the psychologist sleuth to the solution of the crimes.

EASY TO FIND? My ritual search of used bookselling sites turned up quite a few copies of this book in a variety of editions. Published both in the UK and US, Alias Basil Willing was reprinted in paperback only in the UK for some reason. Of the about fifteen or so copies I uncovered nearly all of them are priced affordably. For those who like digital books Orion has reissued many of McCloy's mystery novels as eBooks as part of "The Murder Room." Alias Basil Willing is one of those reissued digital books. At one time they offered Alias Basil Willing in a paperback edition, but this imprint stopped printing all paperback editions a few years ago. I found one Murder Room paperback edition being sold online, but no others. Good luck in your search!
Posted by J F Norris at 11:43 AM