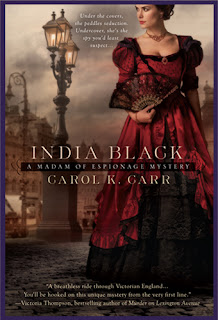 How can you not want to read a book that begins with these two sentences:

My name is India Black. I am a whore.

I had to continue and I'm glad I did.

India Black runs Lotus House a brothel in late 19th century London. Her Tennyson allusion probably goes over the heads of many of her employees but perhaps not too many of the clients who frequent the brothel. Most of the men who call on the bints of Lotus House are prominent men in London society and probably well read enough to know Tennyson's "The Lotus Eaters" and certainly smart enough to know that they will "smile in secret" while, if not "looking over wasting lands," enjoying untold pleasures. One night one of those secret smiling indulgers turns up dead in bed. When India learns he's a prominent member of Parliament she wants to get the corpse out of the house before the nosey journalists get wind of it. She recruits Vincent, a local street urchin (who will play a large supporting role in the adventures to come), to help dump the body in an alley. But she is observed doing so by the mysterious French, a secret service agent, who knows an awful lot about her and blackmails her into taking part in an outrageous scheme.

While the book is marketed as a mystery it is in fact more of an adventure novel with a typical spies in pursuit plot. I was reminded of classic films like The Thirty Nine Steps, North by Northwest and other "chase the Macguffin" type stories that Hitchcock did so well. The book is extremely cinematic with lots of fist fights, chases in horse drawn carriages, ledge climbing and other feats of derring do that would make a stuntman drool in anticipation of a casting call.

In this instance the Macguffin is a case with valuable documents. In the wrong hands the documents could not only embarrass the British Empire but bring it to its knees for they reveal that the British army is sorely under-manned, under-equipped, under-trained. India and French must retrieve the documents but they are already in the hands of a Russian count. The story consists of a series of action-packed incidents in which French and India do their best to recover the documents before any harm can come to Turkey or England.

This is a hip historical mystery that mixes a 19th century setting with a 21st century sense of humor. It's an interesting blend - one that reminded me of Lindsey Davis' similar use of contemporary humor in her ancient Rome mysteries featuring Marcus Falco. Usually I'm put off by this mixing of eras but somehow it works in this story.

India Black is an opinionated, sassy pistol-packing mama. Her weapon of choice: a Webley Bulldog. (go here for more about the gun) When no gun is handy she's not afraid to use her fists. French is typical of the leading men of this genre probably a bit too mysterious and sketchily drawn for some readers. I didn't mind this. He's also teasingly presented as a romantic lead who never lives up his promise. Yet I never got that India really wants anything to do with him as other readers seem to have imagined based on the several other reviews I read for this book. In fact the only real action in that arena is between two women! In the context of the story the scene is pretty funny and a little bit creepy considering why the girl-on-girl action was ordered. But it's hardly offensive or laughable in a derisive way.

My only quibbles with the book are the tendency for India to comment on the action before it occurs (in that gentle reader kind of thing George Eliot liked to indulge in) or comment on it after it's already happened. Let the action speak for itself is a cardinal rule for any fiction writer. The only explaining we need is of the mystery (if there is any) at the end of the book. I'm all for knowing how a character thinks or feels but I don't like to read about an interpretation of something that already occurred. India also has a habit of making lengthy parenthetical comments that give the book a chatty modern tone that doesn't really serve the period well. (I should talk, right?) But these are only minor gripes and I recognize them to be personal pet peeves that crop up in all the books I read.

India Black grew on me. I was both surprised and delighted to find that I really liked her by the end of her rollicking adventure. I'm looking forward to the second book. Carol Carr tells us at her blog to expect it sometime next year.


*   *   *
This is my second entry for the Color Coded Reading Challenge hosted by Bev at My Reader's Block. If you like reading contests jump on the bandwagon, friend!  Click here to get the scoop and the rules.﻿
Posted by J F Norris at 5:03 PM