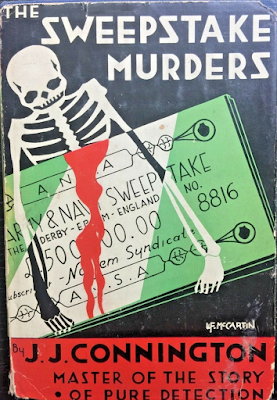 This is one of Connington's many detective novels featuring his series character Sir Clinton Driffield. It was the first Connington book I ever read about five years ago and it's excellent. After finishing it I was surprised that I agreed with the assessment of Jacques Barzun in his A Catalog of Crime. The Sweepstakes Murders really is exemplary for its type. If you are familiar with the scientific detection novels that were popular in the late 1920s through the early 1930s and like reading about the intricacies of early criminological techniques you are sure to admire this book.

A syndicate of nine men go in on a sweepstakes ticket together. Their group is drawn on a long shot horse who manages to place in the derby race they are betting on. They win over £200,000 but the holder of the ticket dies in an airplane crash and this leads to a legal dispute. One of the members decides it is in the syndicate's best interests to draw up a document which states that only living members of the syndicate can draw from the winnings. Then members of the syndicate start dying in bizarre accidents and a murderer is suspected among the survivors.

An intricate plot device involves a camera and a series of photographs that were taken at a geological formation where one of the murder victims was done in. A clever inspector runs a photography experiment that focuses on the way shadows lie in the photos to prove that the murderer himself took the pictures thereby destroying his alibi and proving the death occurred earlier in the day.

Truly one of the best novels of the Golden Age. I was completely caught up in the story. Although the culprit is easy to identify as the bodies pile up and the suspect pool diminishes, the detection by both Driffield and the inspector (a smart policeman for a change!) is fascinating.