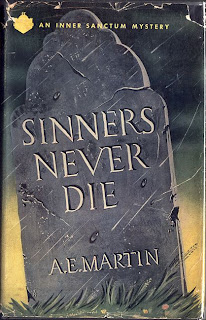 Australian writer Archibald Edward Martin is an underrated and forgotten mystery writer of the 1940s who deserves some notice. He was championed by Anthony Boucher in his reviews for the San Francisco Chronicle when Martin's books first started appearing in the US. Only recently has his work been reissued, but only in Australia and only the first three books. I wish some enterprising publisher would recognize A E. Martin's unique place in the development of detective fiction and get the rest of his work back in print.

Among Martin's many unusual jobs prior to writing to crime fiction were his involvement in the documentary movie exhibition business as well as a touring vaudeville show. Nearly all of his books feature plots that somehow involve show business be it a touring carnival, a vaudeville troupe or an amateur theater company. In the case of Sinners Never Die the story features a traveling sleight-of-hand artist who also does a mind reading act with spook show gimmickry as an added theatrical bonus.

Set in turn of the century Australia Sinners Never Die is narrated by Harry Ford, a very unlikable fellow who is the town postmaster. He busies himself with opening people’s mail and blackmailing those he doesn’t like. As there are very few people he does like he is very busy with his hobby. The complex story involves the disappearance of a young man during a flood, the apparent accidental shooting of a hateful blind man and Ford’s blackmailing of the blind man’s widow and her lover when he convinces them he knows that they actually poisoned the man prior to the shooting. The arrival of a mind reader/conjurer sets Ford on edge when at one of the preview shows he learns that the mind reader has somehow managed to learn everyone’s secrets –- including Ford's criminal hobby. 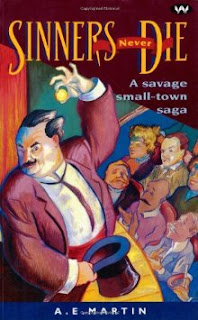 Although this first book is not truly a detective novel the criminal aspects of the plot more than make up for the lack of clue hunting, examination of physical evidence, and interrogation. What is most interesting here is the despicable nature of the narrator and the sudden turn of events that makes this villainous man turn into something of a do-gooder. The reader is never quite sure if his snooping and blackmailing is self-serving or for the benefit of the town. Is he merely toying with the townspeople or is he trying to root out evil? When Harry starts to get a taste of what it is to be a victim, the novel takes on an even deeper dimension about the nature of crime and the criminal's means to an end.

Martin went on to write other books all of them just as rich in detail and character as this one. Sinners Never Die foreshadows the unreliable narrator who would become almost cliché in the modern suspense novel we now have. Writers like Ruth Rendell and Patrick MacGrath used them effectively in their early works of the late 1970s and 1980s. As I was reading Martin's book I was also reminded of the nasty characters in the unhappy, corrupt small towns that provide the creepy settings in the books of Minette Walters (her first four books only) and Caroline Graham. Here is a book that was far ahead of its time.