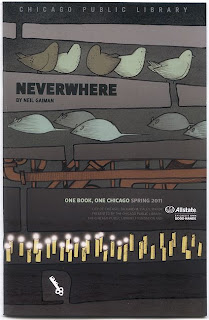 Just came back from my weekly trip to my local branch of the Chicago Public Library to see a display announcing the latest "One Book, One Chicago" title. It's Neverwhere by Neil Gaiman.

The "One Book, One Chicago" program is a city wide reading program to encourage the discussion of good literature. I think there are these types of programs in many large cities throughout the country now. Apparently the first one was in Seattle. The one in Chicago started ten years ago. Previous titles made up an interesting blend of "great works" and contemporary fiction. Books like To Kill a Mockingbird, Night by Elie Wiesel, The Ox-Bow Incident, Pride and Prejudice, A Raisin in the Sun, Go Tell it On the Mountain, The Interpreter of Maladies, The House on Mango Street and even --oh yes-- The Long Good-bye.

Crime fiction finally made its mark in 2008, but this is the first fantasy novel to appear. I was even amazed that Chandler made it among the other important and literary works that have been selected. But not so much surprised as I was by this choice. To have a rather popular and modern fantasy novel like this appear in the "One Book, On Chicago" program bodes good things for the future of what I thought was just another Great Works of Literature arts program in Chicago.

There are booklets that are printed up to accompany each announced title (see photo illustration upper left).  The booklet includes author info, cultural events related to the book, reading group notes and questions, and lists of reading groups and their assigned discussion dates at each of the 79 branches of the library (ours is the third largest metropolitan library system in the US, by the way). Inside I read a letter from Neil Gaiman explaining that part of the book's origin was associated with our fine city. He says:


It was a quarter of a century ago, about 1986. I had recently read a book set in Chicago called Free, Live Free by Gene Wolfe (he’s local to you; the Washington Post has said Gene Wolfe may be the best living writer America has) and I had started thinking too much about cities.

What I had started to think about was that some cities were also characters. Chicago was, in Free, Live Free. It was drawn in such a way that it had become almost magical, and was as much of a character in the book as any of the more human people who walked around in it. 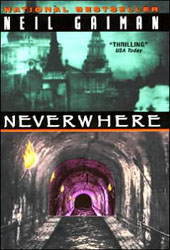 For the complete text of Gaiman's letter go here.  Although I knew about the TV series that I thought was the basis for the book I had no clue about the Chicago tie-in to Neverwhere.

I loved this book. Neverwhere is a powerful work of imaginative fiction that has all the bells and whistles of a rip roaring read. It was the second book by Gaiman I had read. Good Omens was the first and completely different in tone being a collaboration with Terry Pratchett. Neverwhere made me a fan of Gaiman's work for life. It's incredibly exciting that so many people in the city will now be reading this book and talking about it in the months ahead as spring approaches our slowly thawing and melting city.

The list of the titles chosen since the inception of "One Book, One Chicago" in 2001 can be found here.
Posted by J F Norris at 8:54 PM