Fully Dressed and in His Right Mind - Michael Fessier 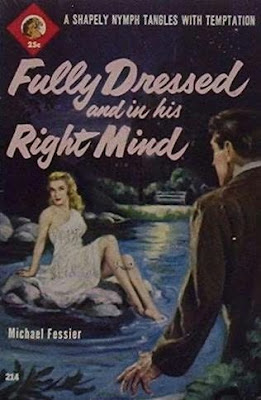 John Connolly, author of the crime novels featuring Irish detective Charlie Parker, once said that he prefers the American term "mystery novel" to describe his books rather than the term "crime novel." He explains it this way:


I know that books have to be filed in some kind of order, but it raises larger questions about the limitations imposed on writers and what they do. For that reason, I tend to like the use of the term "mystery" to describe my books, instead of "crime" or "detective fiction." If you go right back to the roots of the word, a mystery is a revelation from God that can't be understood by human reasoning alone. From the very beginning, it has its origins in the divine and the supernatural.

In that regard the term mystery is perfectly suited for Michael Fessier's very odd novel, a book that I think truly defies categorization. It's mysterious aspects have earned it the quadruple labels of mystery, horror, science fiction and fantasy depending on who happens to be writing about the book. But I think mystery as Connolly uses the word best defines Fully Dressed and in His Right Mind. So much of what happens in the book is never explained. For 1934 this was particularly daring and I liked it all the more for that. Some readers, however, may be angered or frustrated by a story that leaves so much open for interpretation.

The novel opens with a murder and will include two more violent deaths by the time the story ends but I hesitate to call it a crime novel. There is no real investigation of the crimes – we know from the outset who the killer is so it's not a detective novel at all. There is the menacing presence of the little old man who seems to have some unearthly power over all of the characters in the books and this often earns the book recognition as a horror novel if you read him as a supernatural being or as a science fiction novel if your prefer him as extra-terrestrial. Then there is Trelia, the strange child-like woman who swims naked in the lake in Golden Gate Park, who is jokingly referred to as a water nymph by the narrator, John Price. By midpoint in the book one begins to think that she too is some sort of supernatural being and just may be a water nymph. Check off fantasy on your scorecard. There are the odd paintings that Laurence Dorgan creates - portraits of both the old man and Trelia - which capture their soullessness and non-human qualities that also reinforce the argument that the novel is a work of fantasy but at the same time reminded me of the horrific portrait in the The Picture of Dorian Gray. Easily it can be all these things - horror, fantasy and science fiction-  at all at once.  Yet with all these elements I still assert that the book is a true mystery. A medieval mystery, almost. Definitely a mystery of the human soul.

The book has a deceptively simple structure: much of the dialog is a kind of 30s working class vernacular, the prose sentences are short, the vocabulary is unencumbered. But the story in its telling is rich in detail and compelling in its unadorned directness. The more I read the more I found it was closer to a medieval allegory or even a fairy tale than any other type of fiction. Like the Grimm fairy tales it is dark, menacing story, the characters are filled with dread yet also there is a love story aspect to it that is found in the French fairy tales of Perrault. The only female character (Trelia) is a naïve child-like thing almost alien to adult human emotion. The villain – the unnamed little old man who manages to appear magically without anyone ever seeing him enter a room – is more of a malevolent force than a person. Like a fairy tale monster he has eyes that glitter green with intensity. Those eyes have the power to render any human who dares to hold his gaze utterly helpless. The other characters often describe the little old man in reptilian terms:

Dorgan says: "Him slipping in like that's just about as pleasant as finding a cobra in your bed."

George the bartender says: "When his eyes go green on me I have the same feeling I had once when I come face to face with a rattlesnake raised up on his hind end and snapping his fangs at me."

When Price is framed for one of the little old man's savage and cunningly perpetrated murders he is at the mercy of a brutal and blind police force.  The book takes a yet another genre bending turn into hardboiled territory with corrupt and sadistic cops relentlessly beating a confession out of Price and pummeling his friend Dorgan the painter as well.  They revel in their power and laugh at Price when he dares to point out their lawless behavior in the interrogation room.  In a scene that sadly echoes what is going on in many a Chicago police station one of the cops says:

"Listen smart guy, [...] if you are innocent I wouldn't get any more done to me for hitting you twice that I would for hitting you just once.  Shut your trap or I'll give you these."
His red knuckles were wagging within an inch of my nose.
"And besides I think you're guilty and for two cents I'd sock you whether you said anything or not."

And that's towards the end of Price's nightmare. Things do get worse for him and his pal Dorgan. His meeting the little old man brings nothing but bad luck to him and all the people he knows.  In Grimm fairy tale fashion only true love will save him from execution. 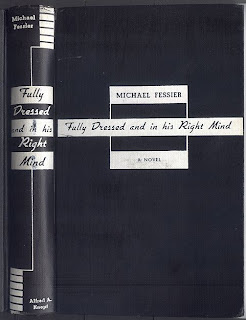 I'd been looking for a copy of this book for years. On my recent vacation to New Mexico I was extraordinarily lucky (in a suitably supernatural book hunting experience) to come across the first edition in superior condition for an incredibly cheap price. I grabbed it off the shelf greedily and let out a near ecstatic gasp along with a whispered "Oh my God!" I couldn't wait to start reading it.

The book can be read in almost one sitting due to its short sentences and speedy pace, but I lingered over it for a few days. I was hypnotized by its surreal and eerie story. I let the mystery of it all wash over me. It's one of those books that can affect readers in so many different ways. Some find it horrifying, some find it very funny, some find it irritating.  I found it sublimely mysterious and fantastically satisfying. It's a book I won't forget for some time.

NOTE FOR COLLECTORS:  The book is more easily found in the Lion Library paperback. Often it runs between $15 and $20 on the internet sites. Sometimes a cheaply priced copy will turn up in a used bookstore. I suggest you snap up the first copy you encounter. You won't be sorry.
Posted by J F Norris at 8:00 AM