ODDITIES: The Crime with Ten Solutions 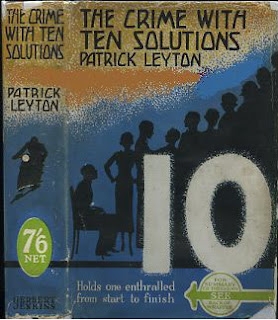 Sometimes a book starts off with a great opening and promises so much. Eleven passengers board a bus en route to a London suburb during a threatening snowstorm. We learn of each passenger's intent on their trip via Leyton's omniscient narrative voice and are privy to secrets early on that none of the other characters discover until much later in the story. Clifford Ransome confides in the woman seated next to him, Barbara, that he is going to an inn in order to hunt for a will that is supposedly hidden on the premises. If he succeeds in finding it he will clear the name of his wronged father who was the intended heir of his grandfather's fortune. Instead the fortune is in the hands of his crooked uncle who apparently forged a second will. Clifford shows Barbara an advertisement announcing that a reward is also available to anyone who can find the will and present it to a lawyer's firm. That advertisement also happens to have been seen by nearly every person on the bus. And the snow continues to fall.

If you notice that this seems like the formula for one of those 1970s disaster movies, you get a gold star. Maybe a free pizza. You've already guessed what happens, haven't you? A spectacular bus crash leaves the motley group stranded within a short walk of the inn where Clifford was headed. They are all forced to stay there until the weather clears and the bus can be rescued and repaired. Clifford soon learns that everyone knows of the ad and he – not so brightly – tells his story to everyone. The search for the will is on. Someone finds the will and instead of receiving the cash reward is killed. The remainder of the novel is devoted to the ten solutions of the title.

Leyton's detective novel with the intriguing title teases the reader with yet another murder mystery in which the author will pull off trick worthy of any stage illusionist – a crime that can have ten separate explanations with ten separate culprits. But there are magicians of the detective novel who are like Kellar, Carter the Great or Blackstone and there are writers like Leyton who aspire to brilliant flamboyance but come off more like a vaudeville hack doing a cheap levitation act with the wires showing. The Crime with Ten Solutions is no miraculous tour de force.

The problem lies in the presentation. After the exciting beginning two characters step forward as self appointed detectives: the innkeeper, Mr. Hartley, who was a former policeman and Dr. Warren who also happens to have been stranded by the snowstorm. They decide to sort things out until the snow lets up and the police can finally get to the inn. The bus passengers are interviewed in succession with each one giving his or her own guess as to what happened in the library when Miss Sprotson, the hapless victim, found the will. And the reiteration begins.

One right after the other the solutions are expounded. Many of them are not very interesting or clever. Only when Edna Lane, a snooty spinster offers her version (the seventh) does the book get a slight lift. She is an arrogant, middle aged woman who treats nearly everyone with disdain and condescension. Her reasoning for knowing the solution – that she is highly observant and reads detective novels – is one of the few amusing moments in an otherwise pedestrian, very familiar story. She shows up the ex-police officer and the doctor both with a few interesting Holmesian bits of inductive reasoning. Her acerbic dialogue is some of the best in the book.

The other interesting character is Father Allendale, a Catholic priest who has a bit of Father Brown in him.  He acts altogether too mysteriously, speaks in cryptic sentences and hints that he knows much more about the crime than the two men investigating it.  I could not completely dismiss him as a mere supporting character. For quite some time I suspected he was a policeman in disguise in pursuit of another character who is a thief on the run.  Even though Father Allendale practically hides in the background while Leyton focusses on the interviews conducted by Hartley and Warren, I was convinced the priest would turn out to be the person who solved the crime. All you regular readers know my track record on these hunches.

The tenth and final solution when it comes is hardly a surprise at all. Sadly, it is one of the few books where the solution is rather ridiculously obvious. I was hoping for something special and I got a pale imitation. A Sondheim lyric came floating out of my memory: "What once was a sumptuous feast is figs. No, not even figs -- raisins!"

I have not read any of Leyton's other books. He created no series characters. The list in the back of my edition lists several titles of his other books with synopses that make them sound like rip-offs of other very well known detective novels of the 1930s. I wonder if Leyton was one of those writers who "borrowed" his ideas from others. Only two of his books were published in both the US and the UK, the remainder only released in his native England, making him one of the many lesser known writers of his time period.
Posted by J F Norris at 12:27 AM