The Problem of the Green Capsule - John Dickson Carr 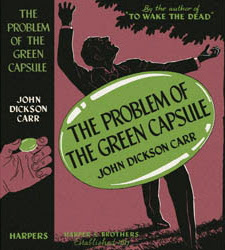 The Problem of the Green Capsule (1939) is subtitled "Being the Psychologist's Murder Case." If the reader should miss this on the title page the final chapter is also conveniently titled the same thing. In England the book was published as The Black Spectacles which, in addition to being part of the murderer's elaborate disguise, is an interesting metaphor which will be explained later. Under his Carter Dickson pseudonym Carr wrote a book called Seeing Is Believing (1941). This book might just as easily be called Seeing Is NOT Believing for the powers of observation – or more accurately the lack thereof – is at the heart of this devilish detective novel.

Here is an example of the type of John Dickson Carr book so lovingly parodied by Anthony Shaffer in Sleuth. It is pure artifice, something that could never happen in real life. The whole thing is really nothing more than a piece of theater. Illusion and misdirection were the key components in Carr's fantastical detective novels. It's surprising he didn't employ more theatrical plot devices like this one in his books. Puzzle lovers are sure to get caught up in the multiple layers that make up the criminal activity in this book. At work are mind-bending psychological game playing, intentional trickery and bamboozlement galore.

Marcus Chesney claims no one truly observes. He pronounces that eyewitnesses are worthless. He is determined to prove to his niece Marjorie, her fiancé George, and Professor Ingram, a psychologist; that they are not as observant as they think they are. In a letter to Dr. Fell he outlines his ideas:

Chesney arranges a theatrical experiment, enlisting the aid of a household servant, which they are all to witness and be quizzed on what they think they saw immediately afterwards. To help prove his point he asks one of the participants to film the proceedings. What is meant to be a piece of melodramatic theater – the servant dressed in an outlandish disguise enters from outside and feigns murdering Chesney – goes horribly wrong. Chesney dies as the result of prussic acid poisoning apparently at the hands of his confederate. Yet later the confederate is discovered wounded and dazed in the yard outside. The pieces of the disguise strewn about the yard. Questioning of the three witnesses proves that none of them could have left their places. It's another impossible situation.  This all seems to be related to a series of poisonings that took place weeks ago. Poisonings in which Marjorie was a primary suspect and the target of malicious gossip. 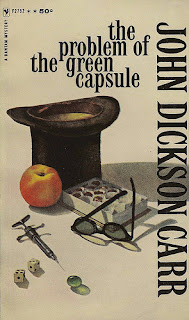 Dr. Gideon Fell is consulted when one of the three policemen Inspector Elliott is stymied. It doesn’t help matters that Elliott has previously met Marjorie coincidentally while traveling in Italy and has fallen in love with her. Dr. Fell recognizes this emotional flaw and helps guide Elliott out of his self-imposed trap towards the proper solution. The film of the playlet proves of great importance in unmasking the killer as does one character's knack for lip reading.

Two interesting parallels: One the book deals with prussic acid poisoning the murder method used in The Fifth Tumbler by Clyde Clason, a book I wrote about last month. There is a remarkable section in Carr's book almost identical to a passage in Clason's book in which the chemical properties and composition of prussic acid are discussed. Not only that –- the commercial, agricultural and industrial uses of potassium cyanide, the main ingredient in prussic acid, are also mentioned in almost exactly in the same order as in The Fifth Tumbler. Clason's book was published in 1936 three years earlier than Carr's. Had Carr read it and used it as a reference in writing about prussic acid and potassium cyanide? Or is it one of those outrageous coincidences of life? Definitely something to mull over.

Secondly: Dr. Fell gives one of his famous lectures in this book. This time it is a poison lecture. I wonder why critics never talk about this one. His locked room lecture (found in The Three Coffins, also published as The Hollow Man) is very well known having been cited many times in numerous articles, critical works. And rightly so. It's a brilliant crystallization of the various ways in which a murder can be committed and made to appear impossible. But this poison lecture is one that is based on true crime cases not a fantastical detective novel trope. Carr outlines a type of poisoning persona and uses the case histories of convicted poisoners to support his theories. It's an overlooked portion of the book and deserves some mention. 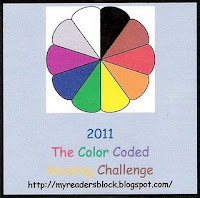 This is my first completed read in Bev's Color Coded Reading Challenge at My Reader's Block.  If you like reading contests jump on the bandwagon, friend!  Click here to get the scoop and the rules.
Posted by J F Norris at 9:29 AM