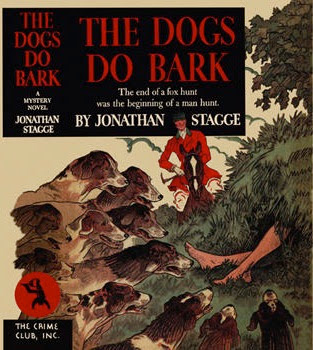 I have this idea that Richard Wilson Webb still hadn't recovered from his intensely lurid thrill ride with his writing partner Mary Aswell when the two of them concocted the brutal and savage crimes depicted in The Grindle Nightmare. One year later in what appears to be his first collaboration with his partner (in more ways than one) Hugh Wheeler he once more delved into noir territory in creating the murders in The Dogs Do Bark (1936). Oddly enough the book first appeared in England under the title Murder Gone to Earth before it was published by the estimable Doubleday Doran Crime Club under the title reviewed here. Although the level of violence never reaches the heights (depths?) of the butchery in The Grindle Nightmare this is definitely a book anyone would describe as grisly.

A nude woman's dismembered corpse is uncovered in a fox burrow at the tail end of a hunting expedition in the Massachusetts town of Kenmore. The body has been decapitated and is missing both arms. While the head does not turn up until the penultimate chapter the arm bones are soon found in the kennel that houses the bloodhounds for a hunt club. The flesh had been completely devoured by the ravenous dogs the night before. All this happens in the first two chapters. Grisly enough for you? But there's more.

Dr. Hugh Westlake, in his debut as Stagge's series detective, is promptly deputized by the local policeman giving him the chance to turn amateur detective with some authority. Prior to the discovery of the murdered woman Westlake had been consulted by Louella (Aunt Lulu) Howell, one of those garrulous fearful invalids that turns up in mysteries of this era. She is fearful of the baying hounds a sure omen of horrible things to come. Nurse Leonard who had been caring for the Aunt Lulu has recently been fired for indiscretions observed on the job. She was convinced the nurse was dallying with her husband, an unattractive dumpy man who Westlake has hard time envisioning as an object of desire. But could the nude corpse be Nurse Leonard?

Then there's Elias Grimshawe. A Bible thumping fundamentalist of the worst kind (yes, they had them back in the 30s, too) he has been battling with the horsey crowd and their obsession with fox hunting for a long time. That the body is found on his property during another of their bloody hunts angers him beyond reason. His daughter Anne who is rumored to have been carrying on with several men, some of them married, has also gone missing. Grimshawe startles Westlake and Inspector Cobb when in referring to the murder victim he quotes an Old Testament passage about Jezebel being fed to the dogs. No one but the the detective duo knew about the dog kennel business. They ask Grimshawe to go to the morgue to identify the body. Grimshawe is adamant that the victim is Anne. 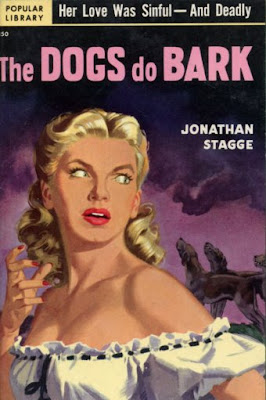 The atmosphere builds to one of Gothic dread set up perfectly with the opening paragraph in which Dawn, Westlake's ten year-old daughter, is seen chanting an old nursery rhyme ("Hark, hark, the dogs to bark/The beggars are coming to town...") while standing at an open window and listening to the howling bloodhounds. Little does she know exactly why they are howling, but her precocious allusion is just as chilling as Aunt Lulu's prediction of horrible events to come. Once again as in The Grindle Nightmare animals are at the mercy of the murderous fiend on the loose and soon a horse is killed by an unusual method nearly killing its owner in the process.

Horses and hunting will play a prominent role throughout the story. So too will the Grimshawe property which Westlake and Cobb learn Anne would have received on her twenty-fifth birthday. The property is of interest to several characters in the book and provides an obvious motive, especially for Walter, Anne's handsome and athletic brother.

Handsome men with athletic builds are another recurring motif in the book and in others in the series. The descriptions of male physique stand out like posing gym boys in comparison to how the women are described and signal to me another kind of fascination of the authors. At times the rhapsodic physical accounts approach the kind of recitals of male beauty you would expect to find in the pages of a bodice ripper. I wouldn't exactly call these passages homoerotic, but they are very noticeable and perhaps revealing of the two men who wrote the book.

Dawn, who will later become more active in the series, is depicted here as a cute little prop used mostly for comic effect. For the most part she behaves like a kid but often she has an oddly precocious and inconsistent vocabulary. In one scene Webb and Wheeler have her confuse the word distinguished for extinguished. Then later she will correctly use the word ominous in sentence. She has a kind of schizoid role -- at times a mysterious oracle as in the opening paragraph and later when she helps her father with offhand comments, at other times a goofy awkward kid obsessed with rabbits. Dawn has always a problem for me in these books. It doesn't help matters much that Westlake refers to her by the ironic endearment "brat" and rarely calls her by name. Still in this first appearance the relationship between father and a daughter is honest and affectionate. Dawn didn't annoy as much as she does in other books.

The Dr. Westlake books would go on to feature equally bizarre and unusual crimes with a tendency towards the Gothic. Turn of the Table has a murderer who might be a vampire. The Stars Spell Death uses astrology and superstition as a springboard for the plot. In The Yellow Taxi the writers recycled the equestrian themes found in the first book as well as lifting the climactic barn fire towards the end of The Dogs Do Bark and duplicating it even to the point of Westlake's escape through an upper level window. Perhaps the most haunting and chilling entry is The Scarlet Circle with its unearthed graves, corpses daubed with lipsticked circles, and the creepy Talisman Inn.

As a beginning to a short-lived series The Dogs Do Bark shows great promise. Veteran detective novel readers may catch on early to the surprise twist in the tale, but that won't ruin what is essentially a fine example of a traditional detective novel with an ample amount of puzzling plot points, intriguing characters and evocative atmosphere.

Below is the complete list of detective novels featuring Dr. Westlake and his daughter Dawn. Those reviewed elsewhere on this blog have links.