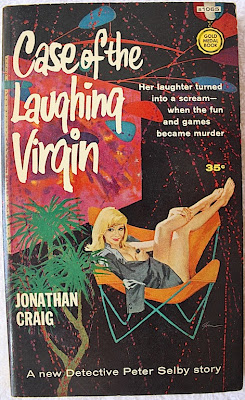 It was bound to happen. I have been disappointed by the latest Jonathan Craig novel I’ve read. This is number eight in the series and there are only two more left. With the best of the lot already behind me I figured the final three might perhaps deliver a clunker among the trio. Case of the Laughing Virgin (1960) is the first letdown in what previously had been a crisply written, offbeat series set in Greenwich Village of the 1950s. In this novel we enter a new decade and already a deeper cynicism has sunk into both the characters and the overall writing.

Craig’s police procedurals are characterized by detail in the bureaucracy of police work and characters consisting of colorful oddballs among what might be called the lowlife of Lower Manhattan. The books nearly always include some unheard of kinky sex practice or fetish as the murder investigation almost always involves sex in any number of practices and preferences. But in this story the situation is seedier than usual, most of the characters are unrelentingly loathsome, and the overall tone is bitter and caustic.

Pete Selby and his partner Stan Rayder trade sarcastic quips more often than usual but the humor is  forced and tone is flippant. The usual crackerjack dialogue is not enhanced with lines like these:

"I was beginning to wonder where everyone was. They must have come by way of Bluefield, West Virginia."  (Says Rayder when his police colleagues finally show up at the murder scene)

"Once upon a time...there were seven little thespians, all in a row. But the brave and brilliant detective team of Selby and Rayder went to work on them -- and now there are three."


Was Craig getting tired of these guys? Was he in a bad period in his life? Or was he just fed up with sex and crime books?

The story centers around the shooting death of Larry Yeager, a no talent actor who blackmails his way into a role in a grade Z play called Grade A about the life of milkmen and the strange notes they find in milk bottles on their delivery route. I can only guess this is Craig’s attempt at humor but it bombs as badly as those lame lines above. Yeager we soon learn managed to purchase a movie featuring a group of six individuals unknowingly caught on film displaying their talent for bedroom acrobatics in a round robin of sexcapades. With the use of clever lighting, a two way mirror, and a hidden camera the evening's activities were filmed without their knowledge and the movie was then shown at a variety of underground stag shows. When Yeager saw the film he recognized several of the unwilling participants in the movie and persuaded the stag show producer and owner of the film to sell him the movie for $1000. Selby and Rayder deduce that he wanted the movie for blackmail purposes. The murder investigation focuses on the search for the missing movie and uncovering the identity of the sex addicted participants all of whom had reason to kill the blackmailing Yeager. 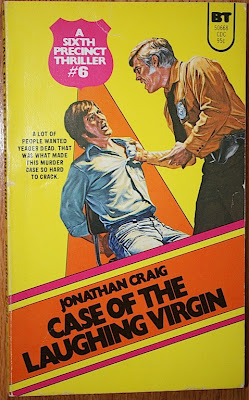 Normally Craig writes about these people with a kind of aloof hipness and tends to make light of the sex underground and its obsession with all things carnal. In previous books these seedy escapades were dealt with almost farcically which took the edge off the freaky. Craig made it interesting, sometimes fascinating, and often amusing to read about. However, the emphasis on pornography and hedonistic sex parties this time is not played for laughs. The writing highlights the squalor of these dens of iniquity, the slobs involved in promoting sex and profiting from it, and the crassness and vulgarity of the people who are their customers and victims. Few characters are presented in a favorable light. Ironically, the only murder suspect who appears to have any decency turns out to be the killer.

Case of the Laughing Virgin has an extremely cynical viewpoint and is unfulfilling as a mystery novel. Craig’s usual offbeat humor which often can elicit a laugh or a smile is all out nasty this time around. Selby and Rayder come off as jaded cops, utterly fed up with the losers and downtrodden types they are forced to deal with day in and day out. Each suspect they question turns out to be selfish, haughty, mean-spirited, brash or unfeeling. The blackmail plot is hackneyed, the detection is at a minimum, and there is not a single twist to enliven the proceedings. (Well, to be truthful there is an attempt at an eleventh hour surprise but it was obvious to me.) I’m moving on to the ninth and tenth books and I’m hopeful for a return to the spark and life of the earlier books.
Posted by J F Norris at 8:12 PM