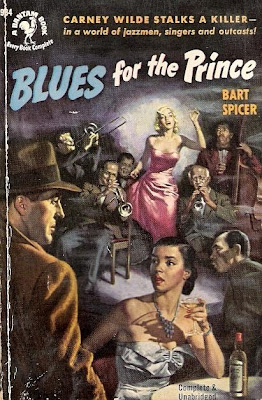 Harold Morton Prince, popular jazz composer and musician is shot dead in his home at the start of Blues for the Prince (1950). His collaborator, a song arranger named "Stuff" Magee, is seen fleeing the crime scene and is expertly knocked down by a cop who uses his billy club as a boomerang. Now Magee is hospitalized with a coma. Found on Magee is a briefcase with documents proving that the Prince was a fraud. His one time collaborator claims he wrote all of the Prince's music. He wanted the Prince to admit it and split his fortune or Magee would go public and ruin Prince's reputation and essentially end his career.

Carney Wilde is hired by Larry Owens, ex-fiance of the Prince's daughter. He wants closure and he wants the truth. Owens hopes learning the truth might help repair his relationship with Martha Prince. Wilde takes the case because he's a jazz enthusiast himself and is a great admirer of the Prince's music. He thinks the whole scheme of Magee's is nothing more than lies and the work of a desperate blackmailer. He wants to prove the Prince was a true musician and that his music is his own. But soon he learns his jazz idol is not the folk hero that newspapers and the fans have made him out to be.

From Martha he learns that her father was "a cheap loud man with bad taste...primitive in his music just as he was in life." From Lt. Grodnik he uncovers the Prince's a "foot long" police record of drunk and disorderly charges. The Prince was also addicted to drugs and at this late stage in his career apparently needed the junk to calm him down so he could perform civilly in front of an audience. Carney is none too happy to have taken up the case. The digging up of dirt gets messier and uglier the more questions he asks. 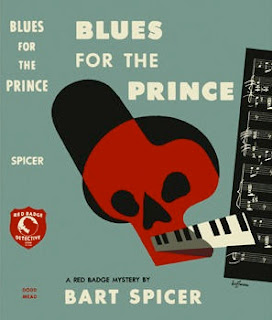 Eventually the case turns to the hunt for Arabella Joslin (aka Bella Joe), a singer in cahoots with Stuff Magee to defraud the Prince out of royalties and discredit him as an original songwriter. When we finally meet the singer she turns out to be a hardass of a pistol packin' Mama. She hates cops and loathes private eyes. Carney barely escapes with his life when she pulls out her double barrelled Derringer.

Spicer knows his jazz music and the story is as much an exploration of the jazz scene as it is another early version of the corrupt family crime dramas like those of Ross Macdonald. Notable too is Spicer's handling of race issues that are rather advanced for a book published in 1950. Carney Wilde manages to clear the Prince's name, repair a bit of the musician's scarred reputation, and heal a very wounded family when he finally discovers how and why the blues man died. Though purists may object to one of the last twists in the finale the novel still has Spicer's trademark realism, honesty in emotion, and an unexpected poignancy in the story's resolution.

Previously on PSB is this review of The Dark Light, Bart Spicer's debut mystery novel and the first of seven books featuring Carney Wilde.
Posted by J F Norris at 12:15 AM