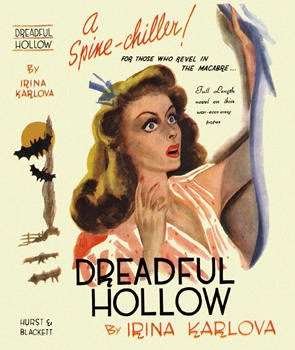 This Gothic supernatural novel with detective novel elements wavers between genuinely creepy and outrageous self-parody. At the time I was reading it I wondered if Karlova is a pseudonym for some better known writer. The name seems influenced by Universal horror movie characters and actors. I later learned that I was correct.

The author’s real name was Helen Mary Elizabeth Clamp (sometimes noted as H. M. E. Clamp), and she was extremely prolific throughout her lifetime. In addition to writing three supernatural novels using the Karlova pen name, she wrote over 60 novels from main- stream to romance to adventure under her given name. Using yet another pseudonym -- Olivia Leigh -- she wrote a few more romances and eleven literary biographies on historical figures such as Nell Gwynn, Charles II of Spain, and Louis XV. Her writing career lasted from 1925 to 1970.

It certainly seems to be more than coincidence that those Universal horror films with all the Eastern European atmosphere and characters should share such a similarity with this book written several years after those films were popular. Dreadful Hollow (1942) is peopled with Hungarian gypsies, a mysterious countess of either Czech or Hungarian descent, a stuffed werewolf, and the dread vampire legend looms large over the story.


Although it borrows a framework from the detective novel in that the two narrators do some digging up of clues and interview servants and neighbors, it really is nothing more than a pulpy, over-the-top horror novel with all the usual HIBK trappings of the neo-Gothic novel. Whereas most of those books are pale imitations of a Gothic novel, Karlova’s book is indeed a true Gothic. She does very well with all the Radcliffian elements – emphasis on dreary landscapes and decaying households, a real femme fatale, a ninny of a heroine who suspects she is losing her mind, and genuine supernatural beings and activity.

Interestingly, the structure of the novel seems inspired by Stoker’s Dracula. The first person narrative journal entries of young Dr. Clyde (who seems to have escaped from the pages of a pulp magazine like Speed Detective — he speaks in an entirely American wiseacre slang) are interspersed with third person limited sections focusing on Jillian Dare, the young girl hired to act as a companion to an ancient crone. Unintentionally funny at the most inappropriate moments the mystery is sadly rather obvious from the opening chapters. When young Countess Vera arrives on the scene, any reader who hasn’t instantly figured out the mystery has probably never seen a vampire movie in his or her lifetime. That isn’t to say the book is not without its deliciously gruesome surprises. There is a disappearance of a young boy that isn’t fully explained until the final pages, for instance. I have to confess that I was alternately raising my eyebrows, gasping and laughing in the final pages which really do get rather wild and bizarre for a book of this era. Even the most jaded contemporary reader will find something to enjoy in Dreadful Hollow.

Clamp wrote two other supernatural books under the name "Irina Karlova" and they are extremely scarce.  I own a copy of Broomstick (1946), a period piece that deals with witchcraft, but her other novel The Empty House (1944) has proven to be as elusive as the Loch Ness monster or a yeti.  If anyone out there has a copy of The Empty House I would love to borrow it...or buy it if you haven't priced it at the equivalent of a monthly car payment.

(This post originally appeared at Mystery*File in December 2010 in slightly different form.)


UPDATE:  In 2016 (three years after I wrote this post) I managed to find and purchase a copy of The Empty House. The book is reviewed here.  Utterly disappointing and more ridiculous than Dreadful Hollow, if you can believe that.
Posted by J F Norris at 2:10 AM