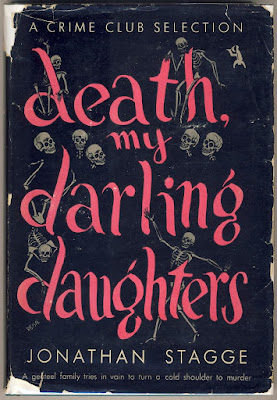 THE STORY: At the behest of Inspector Cobb Dr. Hugh Westlake acts as an undercover detective in the wealthy Hilton household when Nanny dies under suspicious circumstances. Using his role as coroner as an excuse he tries to determine if her death by cyanide poisoning was an accident due to careless use of the silver polish on her antique tea service. Or was she done in by one of her relatives? Nanny had been overheard having an argument with a member of the house in which she accused the other person of planning to murder her grandson. A few days later Dr. George Hilton dies agonizingly in one of the most bizarrely imagined murders of the Golden Age. Now Westlake and Cobb must root out the poisoner before another person dies.

CHARACTERS: There are enough research chemists in Death, My Darling Daughters (1945) to give any policeman a headache. Hilton heads up a research team and is one of those arrogant scientists who wants all the credit for himself making for an acrimonious working relationship with his colleague Dr. Richard Kenton-Oake and especially Dr. Victor Roberts, the hothead hunk (“The young doctor was the best looking man I had ever seen”). Victor is yet another Stagge Adonis whose initial description goes on for an entire paragraph detailing his “too beautiful” looks, impressive physique and “animal virility”. But he’s an embittered beauty. He’s not only angry about having his name left off publications for developing the synthetic rubber esters he made himself, but is ticked off that Hilton disapproves of his womanizing. Victor can’t help himself, of course, setting hearts aflutter of every young woman in the Hilton household including Hilton’s giddy much younger wife Janie. He’s sex on a stick 1945 style, passionate in temperament in more ways than one.

Rounding out the cast of research scientists is Dr. Lisl Stahl, a toxicologist from Austria who unfortunately has all her dialogue rendered in a phonetic accent. (Annoying!) Her scientific specialty conveniently enough is research on rodenticides, specifically on efficient methods to kill rats. But Dr. Stahl is careless with her lab, none of her chemicals are securely locked away in cabinets and the lab is left open to all. Anyone could’ve made their way into her lab and helped themselves to any amount of the various poisons she worked with.

The Hilton daughters who all sport the names of Shakespearean characters – Perdita, Rosalind and Helena – are not at all like their namesakes. Webb and Wheeler like their characters to be ironically named. Helena is brash and brazen, Rosalind is petulant and ridiculing, Perdita is distant and unloving to her father. All of them are talentless musicians no matter how hard their mother attempts to cultivate them into a classical trio. But they have other hidden talents – like vocal impressions. Rosalind is particularly talented in her various impressions of the men and women in the Hilton household. She imitates her mother and sister to perfection. Is that a clue to events to come? Maybe. Maybe just a clever red herring.

Their imperious controlling mother does her best to maintain her façade of social politeness but is a dragon of the worst sort. There is a scene between Mrs. Lanchester (she is George’s sister) and Dr. Kenton-Oake’s wife that could have been lifted from Clare Booth Luce’s witty play The Women. A verbal cat fight that allows each woman to reveal her true self. It’s a trenchant theatrical touch with bitchy and cruelly witty dialogue that foreshadows Hugh Wheeler’s future career as a playwright.

INNOVATIONS: The method of introducing poison in this book is diabolical. No other way to describe it. Dr. Hilton’s murder comes at the most unexpected time in a manner that was gasp inducing for me. It certainly is a nasty and bizarre way to kill someone. I’ve read a lot of mystery novels and it takes a lot to shock me. This one worked.

THINGS I LEARNED: Back in the day (and maybe still true today) silver polish contained enough quantities of potassium cyanide to cause toxicity if not handled properly. Dr. Stahl quotes from contemporary toxicology textbooks specific cases of fatal poisonings resulting from the accidental ingestion of residual silver polish not properly removed from silverware, pots and platters.

Arrowroot, often used in cooking as a starch substitute, can also have toxic properties in mass quantities. Ironically, the name itself originally came about because the plant was useful in drawing out poison from envenomed arrows.

EASY TO FIND? Doesn’t look good as of this writing. Though it was reissued in a 1946 Unicorn Book Club omnibus and reprinted in the 1950s by Bestseller Mystery in digest form there are about ten copies for sale. All of them are the Doubleday Crime Club 1st edition hardcover, some with the unique cavorting skeletons DJ. The chances of buying a UK edition are even more limited. I found only eight copies for sale online under the UK alternate title Death and the Dear Girls (1946). For non-English speakers/readers: my search turned up French, Italian, German and Norwegian editions at the WorldCat.org site. Libraries are always a good option when so few copies are offered for sale.

This is my second contribution to Rich Westwood's "Crimes of the Century" meme. This month we read books published in the year 1945. The first book I read and reviewed was This Is The House by Shelley Smith. A list of all the 1945 book posts and contributor's blogs can be found on this page at Rich's blog Past Offenses.