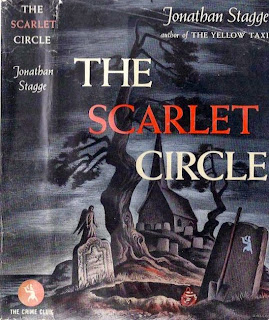 Like most mysteries featuring Dr. Hugh Westlake and his mischievous daughter Dawn The Scarlet Circle (1943) begins with one of the little girl's observations. One night she sees a strange pink light emanating from an abandoned church graveyard near the hotel where the two are vacationing.  Never reluctant to investigate strange and myster- ious events Westlake heads out to the graveyard and interrupts a shadowy figure who has been digging up a coffin. The pink light turns out to be a red paper Chinese lantern and it will signify gruesome events to come. A few nights later another Chinese lantern is found glowing over the strangled corpse of one of the hotel guests. Inexplicably, a mole on her cheek is encircled with a scarlet ring drawn on with lipstick. Could this be the work of a homicidal maniac? 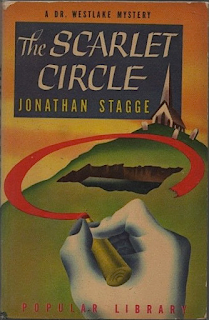 Typical of the Dr. Westlake series the crimes are tinged with a macabre touch, the atmosphere is brooding and menacing. This is perhaps the most Gothic of Stagge's detective novels with its Poe-like emphasis on graves, exhumed coffins, a lugubrious nearly necrophiliac undertaker named Mr. Usher, and a killer apparently obsessed with anatomical imperfections in his female victims. Later in the novel we learn the inhabitants of the Massachusetts town are mostly Portugeuse immigrants who still cling to Old World superstitions and folklore surrounding violent deaths. There are elements of the modern serial killer novel in the ritualized nature of the murders -- the Chinese lantern marking the crime site, the lipstick circle drawn around skin defects and wounds -- and eventually the final twist revealing the murder's motivation. The Scarlet Circle is a fine entry in one of the better American amateur detective novel series. With only nine books it is a shame it was such a brief run for Dr. Westlake.

Also reviewed on this blog is the first Dr. Westlake novel, The Dogs Do Bark

More about the Dr. Westlake mysteries by Jonathan Stagge:
Sergio Angelini on Turn of the Table
Curt Evans on The Scarlet Circle
Douglas Greene on The Yellow Taxi