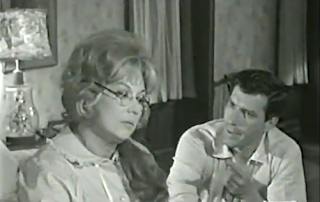 One of the few examples of true noir that show up on The Alfred Hitchcock Hour "Water's Edge" (season 3, episode 3 - 1964) is adapted from the short story by Robert Bloch. The story originally appeared in Mike Shayne's Mystery Magazine in 1956. Interestingly, the story was rejected by Alfred Hitchcock's Mystery Magazine and ironically appeared in an anthology of short stories called Alfred Hitchcock Presents: Stories They Wouldn't Let Me Do on TV published in 1957.  Apparently several of those prohibited stories did eventually make their way to the anthology series.

Rusty Connors (John Cassavetes) is about to be released from prison. For months he has listened to the stories of his cellmate Mike Krause, bank robber and killer, who has been obsessed with his bombshell of a wife Helen. Now as Mike is dying of pneumonia he makes a deathbed confession. The money he stole years ago is still with his partner Pete. As soon as Rusty is out he plans to find the sexy Helen who he hopes to charm and seduce and that she will lead him to Pete and the money. When Helen turns out to be played by Ann Sothern Rusty immediately sees she has not kept her ravishing figure over time. He nearly scraps his plan. After an exchange of less than flattering remarks she agrees to meet Rusty.  Later, the two team up to locate Pete and the stolen money. You can be sure things do not work out as planned. 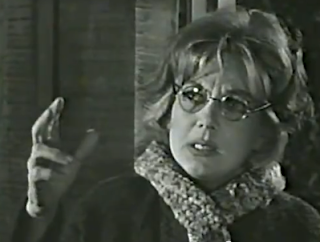 The script almost exclusively is a two character piece with a fascinating reversal on the noir trope of the sexy femme fatale and her gullible mark. This time we get an overweight frump and a slick and greedy Romeo. Cassavetes does a fine job, but it is Ann Sothern's interpretation of a character so completely against her usual type that makes this episode one of the highlights of the series. When Rusty first meets Helen in the diner she eats scraps off a customer's plate and licks her fingers; a perfect touch. Rusty is disgusted that he may have to seduce this slobby, porcine ex-sexpot. As the story progresses Sothern's subtle facial expressions hinting at her hidden motives are a nice contrast to Cassavetes' more overt emotional displays. You just know that this Mutt and Jeff team are out for themselves and not each other. The violent finale set in a rat infested, waterfront shack is one of the most gruesome and brilliantly filmed among the Hitchcock TV shows.

Albert Hayes wrote the teleplay adaptation that sizzles with sarcasm and irony. Bernard Girard, who began his career as a screenwriter back in 1948 and later became a prolific director for TV, brings top notch cinematic techniques to this above average entry in the series.

Highly recommended. The entire episode can be watched below.