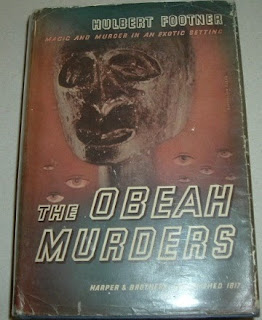 It takes a while for The Obeah Murders (1937) to live up to its alluring title hinting at black magic practices in the Caribbean. The novel starts off with Phil Nevitt, employee with an American liquor company, being sent to Annunziata, a mythical island of Footner's creation in the West Indies, to learn all he can about the rum distillery of Randall Trantor. I'm thinking this is going to be some kind of industrial espionage story. But the first encounter with one of the Annunziata inhabitants takes the story into a completely different realm.

Nevitt meets Eve Brinsley, a 17 year-old spitfire, who while astride her horse during a pig sticking hunt is seen whipping her black servants for their failure to corral the pig she managed to wound. Nevitt intervenes, rescuing the servant from the whip, receives a harsh reprimand from the teenager and is nearly whipped himself. This is followed in quick succession by a barroom brawl that lands Nevitt in jail, a jail break, and an attempt to smuggle Nevitt off the island before he causes any more trouble. While waiting for his jail break co-conspirators Nevitt learns that Eve has been abducted by the man who he assaulted in the bar. So Phil is off to save Eve from the bad guys. From corporate spying in the booze biz to western movie serial adventures. Where was the West Indian sorcery known as Obeah, I wondered?

The book is well past the middle mark before the Footner remembers that he intended to write a murder mystery. Eve having been rescued from the West Indian version of the guys with black hats is soon being married off to Randall Trantor, the distillery owner and the island's richest man. At the wedding banquet the newly married Trantor gets stupefyingly drunk, orders a special bottle of his private reserve of Spey Royal whiskey, tosses off his umpteenth drink, and immediately drops dead. There are cries of "Obeah! Obeah!" from the superstitious wedding guests for Trantor had earlier been seen stepping over a bad luck charm which signals imminent death. Eve is suspected of committing the crime as she is the one closest to her husband and the bottle was delivered straight from the cellar to their wedding table. The cellar was kept locked at all times and was only accessible with Trantor's key. The bottle could only have been poisoned by someone at the table. Or was it somehow bewitched via black magic?

As the murder investigation proceeds Footner uses the story to raise some progressive ideas (for the late 1930s) about race and power. Talk of skin color and how that decides how one is treated on Annunziata often comes up throughout the story. Though the island is fictional its history is heavily borrowed from the Danish West Indies. Footner goes out of his way to talk about the white invaders from Denmark who took over in the early 17th century and subtly introduces into the narrative topics like miscegenation and oppression of the native people. Skin color is always being brought up whether it be the yellow of the Creole, the brown of the children of mixed marriages, or the black of the natives often referred to by the N pejorative.

I know that I've read several detective novels with plots featuring white privilege in island populations be they in the South Pacific or Caribbean, but this is the only detective novel to date from the era spanning the 1920s through the 1940s I have encountered in which native culture and race relations play an important part in the solution of the crime. In fact race is the key to understanding the motive of the murderer who is striving to achieve a place of power on the island. He does so by exploiting the cultural superstitions of the population and at the same time playing up to the prejudices of the white policemen in charge of the murder investigation. He nearly eludes capture but for some luck and intuition on Phil's part.

As for the Obeah there is a sprinkling of lore and legend throughout the book. Interestingly, Footner casts in the role of the powerful sorcerer an elderly woman character and she becomes suspect number two in the murder. There is a bizarre and richly detailed scene towards the end of the book showing off how intimidating the magic of Obeah can be even to a skeptical outsider like Phil Nevitt.
Posted by J F Norris at 7:45 PM