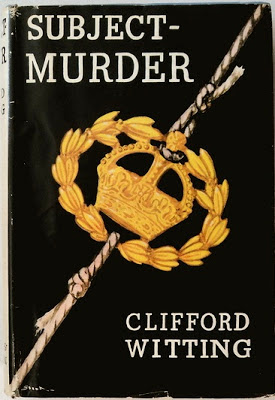 Fans of Foyle's War, the British television series about a policeman who during World War 2 finds himself solving crimes involving military personnel, might be interested in Subject-Murder (1945) a detective novel by Clifford Witting based on his personal experience as a bombardier in an anti-aircraft detachment.  The detail about military life in a detachment as opposed to a regular army base is fascinating and when the story finally makes its way to the investigation of a murder of a warrant officer Witting once again proves he has the stuff of a high ranking officer of detective novel plotting.

Peter Bradfield, the detective constable colleague of series character Inspector Charlton, is the narrator. Most of the book is devoted to Bradfield's reporting his military training from the summer of 1942 through November 1943. We follow him from basic training in Wales to his various transfers to other posts eventually landing him in an anti-aircraft detachment between the villages of Etchworth and Sheep, and coincidentally just outside of Lulverton where he and Charlton are based as policemen.

Battery Sgt. Major Yule -- "Cruel Yule" to the bombardiers he oversees -- is a sadistic, manipulative and narcissistic bastard. No other words describe him better. Throughout the novel he proves to be one of the most odious villains in the entire genre. In his indifference to human feeling and his perverse joy in causing misery for the soldiers Yule has managed to drive one man to suicide, got men he dislikes transferred to other bases, and punished others with demotions based on trumped up charges.

When we first meet him through the eyes of Johnny Fieldhouse Yule is seated at a desk in his office taunting a mouse he has trapped under a drinking glass. Fieldhouse, a man of honesty and integrity, is appalled and immediately frees the mouse and gets into a tussle with Yule in doing so. This brief encounter will put Fieldhouse on Yule's list of marked men for the remainder of the book. Though he is consistently warned by Bradfield and others to rein in his self-righteous indignity Fieldhouse pays no heed. He is who he is and cannot change, especially when confronted with the monstrous and amoral behavior he sees exhibited by Yule. Damned be his higher rank, is the bombardier's attitude. Fieldhouse's moral integrity will lead to a world of trouble for him including court-martial, brief imprisonment, and prime suspect in the murder case.

Is it any wonder that Yule in creating false incidents, framing men he dislikes for imaginary offenses while protecting lazy good-for-nothings like himself, becomes the target of everyone's enmity? His demise is long overdue when it comes. Fittingly, he dies a gruesome and horrid death -- dragged by his legs while tied to an enraged horse, trampled and beaten by its hooves. When murder occurs on a military base the structure of a soldier's life -- or rather a bombardier's life -- reverts to that of a civilian.  All men are on equal footing as suspects in a crime; no one can pull rank now as the police become the officers in charge.

The detection in this book is top-notch. Clues and red herrings are abundant as in any of the best examples of the fair play detective novel. Charlton is allowed to team up with his old colleague Bradfield and together they uncover such intriguing evidence as unusual knots in the rope and dog leash used to tie up the murder victim, a book on torture practices of the Spanish inquisition that has certain passages bracketed, and the double life of a mysterious soldier named Alexander Templeton.

The large cast of characters of military men and the few civilian women make for a varied bunch. Witting finds ample opportunity to show off a skill in replicating regional dialects and his gift for creating lively dialogue.  Several of the minor characters like Gianella, a clever recruit whose specialty is playing stupid in order to get out of being assigned dangerous tasks, are the highlights of the book. In addition to the detective story plot Witting gives us a few romantic subplots with Bradfield and Fieldhouse both pursuing the girls of their dreams with some interesting sometimes amusing complications that arise.
Posted by J F Norris at 9:10 AM