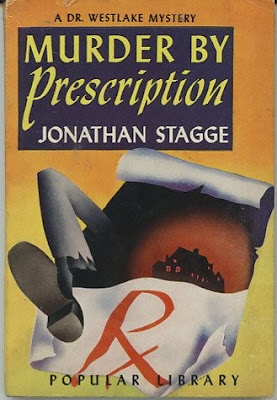 "Why should the body live when the heart is dead?"

I'm beginning to think that Richard Wilson Webb was a secret sadist and hated animals. Murder by Prescription (1937) is the third detective novel and the second in the Dr. Westlake series in which cruelty to animals is on shocking display yet again. Not satisfied with the torture of horses and dogs in The Grindle Nightmare, not having worked out of his system even more brutality to horses and dogs in The Dogs Do Bark Webb and his collaborator Hugh Wheeler fill the pages of Murder By Prescription with kidnapped rabbits, a garroted cockatoo, and a dungeon-like warehouse of caged and starved cats that serve as experimental subjects for a couple of borderline mad scientists. All this in a story that is ultimately about the best way to alleviate suffering in terminally ill patients. The writers raise many questions about the practice of euthanasia and whether it is actually murder.

The original title of this second book in the Dr. Westlake detective novel series is Murder or Mercy? which underscores the main dilemma of the police when confronted with a series of ambiguous deaths.  Even the Italian title La Buona Morte (literally The Good Death) alludes to the central theme of mercy killing. Dr. Westlake has his reputation at stake all thanks to a newspaper account that mistakenly identifies him as a doctor who made a polemical speech about euthanasia at a community gathering. The real doctor who delivered the speech was a Dr. Westbrook, "an old quack" who "had a passion for getting into the newspapers". And it is this physician who Mrs. Talbot intended to have call on her when she makes her plea to have her life ended. But it's Westlake's name in the newspaper and it's Westlake who makes his visit to her bedside.

He listens to her veiled request to be put out of her misery and also indulges her by witnessing and signing a paper she scrawls out hastily. He leaves with her daughter Hermia a small amount of morphine pills and instructs her to give them as needed. Later that night Mrs. Talbot dies, presumably by her own hand. Police investigation discovers that although Hermia left all the pills by her mother's bedside the envelope containing the morphine fell behind the bed and was out of Mrs. Talbot's reach. Westlake notices that more than half of the 100 pills he started with that night are missing from the morphine bottle. When an autopsy reveals morphine poisoning it is clear to both the coroner and the police that Mrs. Talbot was murdered.

Things go from bad to worse for Dr. Westlake when the newspaper account with his name turns up in Mrs. Talbot's hand. And what of that handwritten paper with his signature? It's nowhere to be found. Was it a last minute change in her will? How convenient it would be for the doctor to take advantage of his euthanasia stance by subtly persuading the woman to kill herself after learning she intended to leave his nine year-old daughter $10,000.

Woven into this fiendish plot to frame Westlake as a sort of 1930s Dr. Kevorkian are some of the most bizarre characters ever created by Wilson and Wheeler. Mrs. Talbot's second daughter Gail and her husband Conrad Fiske are the creepiest, most atypical married couple to ever appear in a 1930s mystery. Conrad, a genius medical student working on experimental narcotics in a fancy home lab, seems to be a precursor to the modern 21st century dude. With his sloppy attire, his permanently unshaven face and unkempt hair he could easily be mistaken for any hipster college student of our age. His wife is similarly unconcerned with her appearance, shying away from the usually heavily made-up faces of 1930s women her own age. But it's her manner that is most shocking. Rude, brusque and entitled she has no boundaries in expressing her opinion. To her Westlake is no better than a servant. She helps herself to medicine from his medical bag, openly insults the man, and dismisses him when he dares to confront her with inappropriate behavior. Wilson and Wheeler do a good job of setting up this unlikeable duo as the villains of the book. They may act like borderline sociopaths and ultra self-absorbed spoiled rich kids thinking nothing of the inhumane experiments and animal victims, but are they really capable of murder?

Westlake's precocious daughter Dawn is probably the most interesting in this book as well. She serves as a foil to the burgeoning romance between Westlake and Hermia Landreth, Mrs. Talbot's martyr-like daughter. Dawn proves herself to be quite the girl sleuth when her father recruits her to find a crucial piece of evidence in the finale. She pulls off her adventurous assignment with the aplomb of Nancy Drew or Judy Bolton and gleefully delivers into his hands the last bit of proof needed to unmask the murderer.

The Westlake series tends to bring out the macabre side of this mystery writing duo. Here is a book that shows us their penchant for Poe-like grotesquery and scenes of unnerving horror. Wilson who was the primary plotter of the two writers knew there are some taboo topics that just weren't meant for books intended as light entertainment and indulges himself with abandon. The sequence in which Westlake and the suspicious butler Josephs make their way to a dingy and fetid cellar and break into the storeroom where the Fiskes keep their animal subjects is as grotesque as the discovery of the walled up corpse and wailing feline in "The Black Cat". The only relief the reader gets from this stomach churning scene is Westlake's rescue of a couple of Belgian hares he bought as his daughter's birthday present. Later in the book the significance of the rabbits' unscarred and healthy appearance will serve as a big clue to one of the book's final surprises.

Murder by Prescription while only the second book in the Dr. Westlake series is perhaps the most unsettling and disturbing mystery written by Wilson and Wheeler. From the series of murders committed seemingly without motive to the horrors of the animal experiments to yet another death trap from which Westlake must escape this detective novel is teeming with nail biting thrills. The various scenes alternating between inflicting pain and relieving pain and the continual reference to the phrase "murder or mercy" make for some moments of uneasy reflection about the right to die and the role of science in medicine. For a book written in the 1930s it still has some resonance for a 21st century reader. Why these books haven't been reprinted since their original publication is a bigger mystery than those presented in the story.
Posted by J F Norris at 10:25 AM