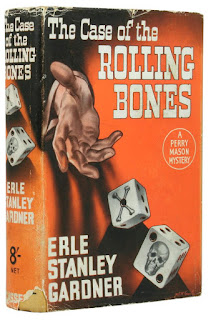 If The Case of The Rolling Bones (1939) is any indication of how Gardner moved away from the rough and tough Perry Mason in the very first books to a Mason who is a combination of courtroom wizard and clever detective then sign me up for more! This was one heckuva improvement over the hardboiled Mason I first met several years ago in his debut, The Case of the Velvet Claws (1933) and the much later Mason of the late 1950s to early 1960s who liked to switch guns and play around with ballistic evidence that left my teenage head spinning in confusion. Granted there may be some dizzying plot twists in ...Rolling Bones having mostly to do with one character who has multiple aliases but for overall I liked this entry in Gardner's long running series very much. Unable to stop reading I whipped through the book in nearly a single day. That's a rarity for me.

It all starts rather innocently as Phyllis Leeds, Emily Milicant and Ned Barkler --all friends of Alden Leeds, a former gold prospector who struck it rich in Alaska back at the turn of the 20th century -- approach Perry Mason to help with what appears to be a blackmail scheme. A check for $20,000 made out to someone named L. C. Conway is specially endorsed by Leeds who insists that the money be handed over to a young woman who is not Conway. This odd incident is straightened out fairly quickly but Mason soon discovers that Conway's shady business of selling loaded playing dice has suddenly shut its doors, sold the business and skipped town.  Then Leeds writes another check for $15,000 to the same Conway and this time the money is handed over to a completely different woman. Mason demands to know what secrets in Leeds' past demand such large amounts of hush money to be doled out to two mystery women.  He learns of Leeds life as a prospector and the accidental death of his partner, an elaborate scheme involving masquerade, dual identities, and a corpse that has apparently come back to life. The case takes a nasty turn when L. C. Conway later turns up with a knife in his back and living under a different name. But the case is just beginning and the courtroom hearing to determine whether or not Leeds can be brought to trial for the murder of Conway will reveal even further complications. 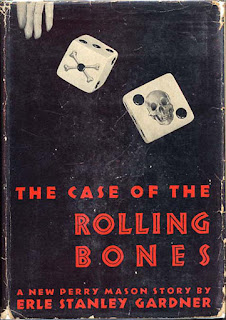 This is an exciting novel in the Mason series for both reader and Gardner's series characters. Both Della Street and Paul Drake have key moments where they are directly involved in the case. Della saves Perry from being arrested for speeding and lying to police with the help of Gertie, the switchboard operator. This is Gertie's debut in the series, incidentally, and she marks a strong first appearance with the stunt she pulls in the office (on Della's orders) to distract the police. Later, Gertie shows her innate acting skills in a startling courtroom moment indicative of Mason's brazen legal trickery. Drake does a lot of nifty detective work both on his own and with the help of his private eye operatives based in Seattle and Alaska. He's got quite a lot of connections, gang. He also spends a lot of time chewing gum (did he ever do that in the TV show?) and slouching his lanky angular body in Mason's luxurious leather armchairs.

Gardner goes out of his way to paint interesting portraits of Mason's two most famous sidekicks. The characters as portrayed by the actors in the TV show are so staid and conservative and engrained in all of our minds. It's startling to discover how Gardner first envisioned them. Della is far more sexy and actively involved than Barbara Hale ever was. Paul is a lot more colorful than William Hopper's blandly handsome, not so imaginative hunk. Both of them are just as clever and slightly roguish as Mason. They make quite a formidable trio on the printed page and especially in this particular outing. 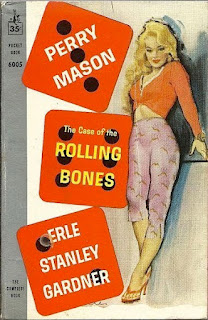 There may not be any gun switcheroos or bullets gone awry in the plot of The Case of the Rolling Bones but there is still enough to make the novel zing and swing. The story of Leeds' past in Alaska is never really cleared up until the final pages. We hear several different accounts of what happened, along the way some impersonations and aliases crop up that can at times be a bit confusing. It's one of those books where the list of characters that Pocket Books liked to print at the front of their paperback editions comes in very handy for reference. Nearly everyone is pretending to be or pretends to be someone else in this story. One character has four different identities making the courtroom scenes rather funny when the D.A. insists that everyone refer to that one person by one name. Since all the witnesses know him by three other names they keep correcting themselves until Mason and the judge have had enough of it. I think Mason even makes a joke about taking it easy on the courtroom reporter.

From a case of blackmail and check fraud to a con artist selling crooked gambling dice to the greed of gold prospectors back in the 1900s culminating in a violent murder in 1930s California The Case of the Rolling Bones is one of Perry Mason's most exciting cases. Gardner has really hit his stride with this book. Fast paced, tightly plotted with some darn clever twists, excellent set pieces featuring Della and Paul, the story ends with Gardner's trademark courtroom showdown complete with a breakdown on the witness stand. It's all here and then some. As Ned Barkler says punnily in the closing, "That's what I call a natural!" 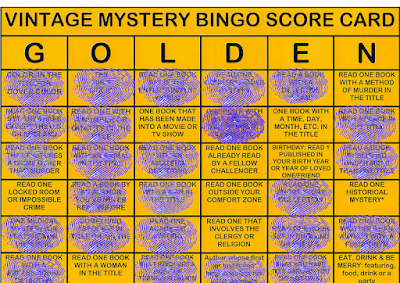