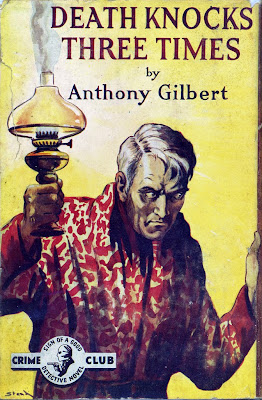 I seem to be on a roll in choosing my kind of detective novel.  My first taste of the prolific --and sorely overlooked by me -- "Anthony Gilbert" (in reality Lucy Beatrice Malleson) was another delight from start to finish.  And such an unusual blend of so many different kinds of subgenres.  Death Knocks Three Times (1949) is almost unclassifiable.  It's a Gothic send-up, a satire on the art of novel writing, a treatise on detective novels, a "badass biddy" (my own name for a certain type of subgenre featuring nefarious and murderous senior citizen women) suspense thriller, and the end a fair play mystery novel.  But detection, I have to say, takes back seat to an engrossing tale of duplicity, blackmail, anonymous threats and familial jealousy.

There are mysterious deaths aplenty and crime galore in Death Knocks Three Times, but the emphasis is on a cat and mouse game between many of the characters. The reader becomes spellbound by the serpentine plot and may be more interested in trying to figure out just who are the heroes amid all the villainy rather than uncovering the identity of the murderer.  If there is one!  Lucy Malleson's most popular detective Arthur Crook is hardly the main character in this outing though he does the wrapping up in the penultimate chapter.  I almost don't want to say anything about this book because truly it's so strange and surprising in how it unfolds. The story shifts gears and moods so many times that to give any kind of summary would ruin discovering what it has to offer. I'll try my best to highlight the bare bones.

The opening chapter seems be a homage to Benighted by J. B. Priestley. Crook is travelling in Scourge, his beater of a car, to visit a friend when a terrifying storm of Biblical proportions washes out a bridge and makes driving impossible. Just as in Priestley's book Crook goes in search of shelter and fortuitously there happens to be an old house just off his ruined route. He is greeted by a creepy old butler who thinks he is someone else, eventually inveigles his way inside and meets the eccentric and belligerent Colonel Sherran who seems to be living in a long gone past much like the occupants of the sinister Femm mansion. Crook lets the Colonel know of his specialty in law -- he is skilled at aquitting guilty people -- which results in an almost immediate friendship and a glowing congeniality from the previously blustery and rude ex-soldier. This is the first of the most telling clues that I guarantee any reader will almost instantly forget by the time the book is in full swing. It's also a sure sign of Malleson's talent in concocting a tantalizing mystery novel.

Enter John Sherran, a struggling novelist and the Colonel's nephew. He was the guest the butler Bligh expected when Crook rang the bell. John and his uncle have an argument and in the morning the Colonel is dead. After breaking down the locked door to a bathroom they find the colonel in a Victorian bathtub the lid of which has come crashing down on his head. An accident?  Or a fiendishly designed murder?  Crook ends up attending the inquest to give evidence along with Bligh and John who are the only other witnesses. The surprising verdict is death by misadventure. 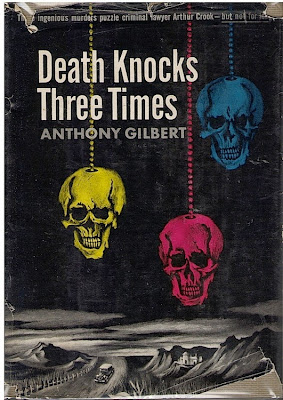 But the Colonel's death is only the first in a series of suspicious accidents that may or may not be cleverly disguised murders. Death seems to be following John Sherran wherever he goes and his relatives are dropping like flies. The reader is privy to John's thoughts and we get an inkling that he has been tempted to bump off his rich relations so that he can live a more comfortable life as he blunders his way through writing mediocre novels that don't sell very well.  But is he guilty?  Wouldn't that be too obvious?

Malleson does an excellent job of painting her characters in shades of ambiguity.  There are no good guys dressed in white nor any villainesses wearing slinky black cocktail dresses. Nearly everyone has a dark side to them and by the midpoint nearly everyone seems to have murder on their mind, especially the odious Frances Pettigrew, an ex-governess John keeps running into with a frequency that beggars belief.  Coincidence or design? The scene in the train compartment between John and Miss Pettigrew shows off Malleson's taste for the macabre as we listen to Miss Pettigrew deliver a De Quincey-like lecture on the fine art of murder.  Her speech curdles the blood while simultaneously bringing a devilish smile to a contemporary reader who can only laugh in astonishment at such a callous old woman's philosophy. Her appearance takes the book further into a surreal world where activities like playing cards, riding an elevator, or taking a tea break are fraught with peril.

For anyone who hasn't read Anthony Gilbert I highly recommend this as your entry point. I found the strange shifts in mood in Death Knocks Three Times to be thoroughly beguiling. The plotting is mesmerizing, the characters are outrageous, the suspense is relentless and the ending is killer. You're sure to be stunned by one or more twists in the gasp inducing finale. I've read many a book with a triple twist endings, but is it possible to have a quadruple twist?  This could be it!

I'm not the only one who thinks highly of this book.  For those not satisfied with my review I suggest you read any of these three raves from my fellow vintage mystery bloggers:

Reading Challenge update: Golden Age card, space E6 - "Book you have to borrow".  I got this copy from the Chicago Public Library. Also this counts as one of the three books I read for the "1949 Mystery Book Challenge" for the month of May sponsored by Rich Westwood's blog Past Offences.
Posted by J F Norris at 1:05 AM