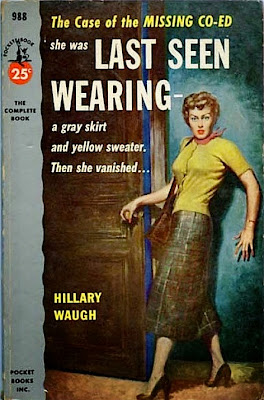 Three simple words that will turn many a head whether it be on a flyer taped to a street sign or emblazoned in 36 pt. type on a newspaper headline. It’s all too familiar to watchers of the nightly news and serves as tempting bait for TV producers looking to spike their ratings. A Massachusetts college girl goes missing in Last Seen Wearing… (1952) the novel that made book reviewers and crime fiction fans take notice of Hillary Waugh whose work previously consisted of a handful of private eye programmers and a couple of suspense novels.

Tired of books populated with dumb cops who are shown up by clever amateur sleuths and wisecracking private eyes Waugh set out to tell a realistic crime story that would reveal an accurate portrayal of how police collaborate. The result is a perfect blend of the traditional detective novel and the contemporary police procedural. Surprisingly, the book still holds up well probably due to Waugh’s choice to focus on a missing person case and setting his story in a college town.

College educated Sgt. Cameron taunts his superior officer Chief Frank Ford by tossing off "three dollar words" like picayune and clairvoyant just to aggravate his boss. Ford is an old school cop who firmly believes there is a boy at the bottom of Lowell Mitchell’s disappearance. Ford is also reminded of an unsolved case of a missing college girl dating back to 1937. Never found Ford believed she went to see a doctor for an abortion, she died on the table, and he disposed of the body. Ford spent a lot of time trying to prove his suspicions but never got enough physical evidence to arrest the doctor. 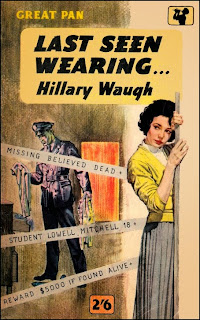 Still haunted by the case Ford can only think of the worst about young Lowell. Her wealthy and overly protective father insists she’s a good girl who never had a steady boyfriend and can’t imagine she was having sex with the few young men she dated. He has put out a reward for any information that will lead to finding her. Then her body is found washed up in some bushes along the shores of a river running through the campus. An autopsy shows that she was a few months pregnant. Turns out no one really knew Lowell as well as they thought -- not her family, not her roommates, nor the young men she dated. Only Lowell’s cryptic words written in her very frank diary will reveal the truth about her. Just as Chief Ford feared there is a man at the cause of it all. But which one of the many names mentioned in Lowell’s diary belongs to the man responsible?

This is one of those books that shows up on a lot of "Best of " lists and is highly regarded as a landmark novel in the history of the genre. Though writers like Helen Reilly in the US and Nigel Morland in the UK had been writing excellent examples of the police procedural during the 1930s and 1940s apparently it was Hilary Waugh who had readers and critics alike take notice of a new kind of detective novel that would appeal to modern readers. Last Seen Wearing… is indeed one of the best examples and while there isn't as much interesting detail about the relationships between the cops nor the dull bureaucracy that are both hallmarks of Jonathan Craig's 6th Precinct series Waugh still shows that police can be just as clever and insightful as the brilliant amateurs who dominated the genre in the pre-World War 2 era of the Golden Age. This is a highly recommended book for serious fans of the genre. And I think many seasoned writers being published today might learn a thing or two by studying this lean and trenchant book.
Posted by J F Norris at 10:41 AM