The House that Kills - Noel Vindry 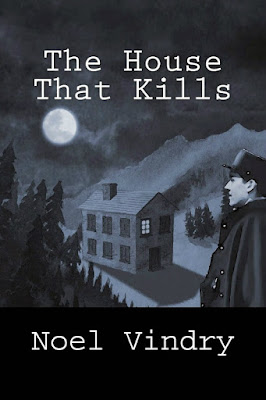 I am beginning to sympathize with Julian Symons’ complaints about what he called the humdrum school of detective fiction. At least the French version of the humdrums. I’m certainly encountering a slew of them as they are presented to us via Locked Room International, an indie press created by John Pugmire who also translates the books into English. The latest offering, Noel Vindry’s debut mystery novel first published in France in 1932, is one of the most disappointing offerings yet. Though two of my favorite French crime writers Pierre Boileau and Thomas Narcejac admired Vindry calling him a writer of “unequalled virtuosity” and a creator of “stupefying puzzles” I found neither of those qualities on display in this first book.

The House That Kills is the perfect example of a detective novel as a wholly contrived story. And as such it is far from mystifying. Any devotee of the locked room or impossible crime novel will see through its trickery almost instantly. A family is terrorized by a gang of murderers who announce their crimes in the form of anonymous letters miraculously hand delivered to the house without anyone seeing the messenger. Each victim is killed violently in a locked and guarded room by an unseen assailant who manages to escape the house altogether. Paragraphs are devoted to the layout and architecture of the house with Vindry going into great detail on how its impenetrably designed locks would take a lengthy time to open even with a key and the thick walls could not possibly conceal secret passageways leaving the crimes even more puzzling as to how the killer got in and escaped unseen -- at least to the dull witted and easily manipulated policemen and the narrator, a junior magistrate. To any astute reader the solution is obvious.

This particular plot is extremely derivative of two very well known locked room mysteries, borrowing a time worn gimmick that dates to the Victorian era. M. Allou, a veteran magistrate who apparently knows his history of detective fiction very well, appears on the scene at the novel’s midpoint, within minutes sees through all the deception and in the ninth chapter delivers his solution to all but one of the four murders committed. But there are six more chapters to come. Why bother reading the rest you may wonder. Well, there is that one unattributed murder, the escape of the accused from police custody, and one more seemingly puzzling attempted murder.

This edition of The House of That Kills includes a foreword by Pugmire in which he refers to several of Vindry’s essays on the genre, specifically the subgenre Vindry calls the roman problème (problem novel literally, but Pugmire translates it as puzzle novel) to distinguish it from the roman policier (the police novel, or police procedural). There is an appendix that includes the full versions of those essays making the foreword somewhat redundant. It’s interesting to read Vindry’s own analysis of the detective novel as he envisions it and comparing his ideas to The House that Kills. Almost none of what he remarks on is present in his first book. He talks about how the roman problème can include drama, mystery and logic and still have room for style. Balance was his main concern; the skill with which the writer must handle all three elements not allowing any one to overtake the other. Remarkably, he writes "...if logic dominates the work degenerates into a game, a chess problem or a crossword and it's no longer a novel."  I fear that is exactly what happens with Vindry's debut book.

The House that Kills is stripped down to the barest essentials. While there is action aplenty the characters are puppets in service to the contrived story. All these impossible crimes, talk of ghosts and inhuman agencies are intended to create an atmosphere of mystery and wonder. The reader should be thrilled and curious but nothing seems at stake. It all moves too fast and the two emotional moods waver between cold logic and histrionic disbelief. Every now and then for variety there is an outburst of obviously feigned horror. With little room left for Vindry’s supposed style and no real interest in making any character remotely human or complex or interesting in the least this impossible crime mystery novel is impossibly cold and empty. As cold and empty as a locked and sealed room.