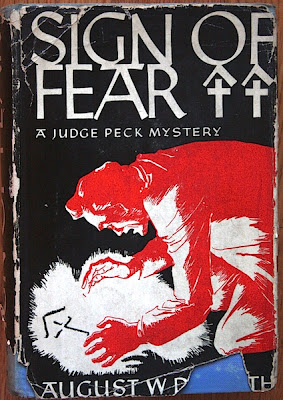 With only a few quibbles I think Sign of Fear (1935) may be the best of the Judge Peck books. Derleth's series about the Wisconsin judge seemed extremely formulaic to me with his love of Gothic households, families ruled by stern matriarchs doing their best to keep in line the back biting relatives, and closets filled with a battalion of skeletons rattling all too loudly. Murder Stalks the Wakely Family, The Man on All Fours, and The Narracong Riddle all seem to be variations on a theme so overplayed that the last book in that list is a very close rewrite of the second. I was planning on reading the entire series but quickly tired of the repetition. Then I found the Sign of Fear – one of the rarest of the Judge Peck books – in a bookstore in Jackson, Mississippi and had to buy it. As I pored over the pages it became clear that here was a book that breaks away from Derleth's comfort zone and manages to put some truly original spins on his version of the fair play detective novel.

First, the matriarch is absent from the family. Instead we have two unmarried brothers and a female cousin making up Derleth's usual haunted family. Second, there is a mysterious murder method that is not made known until the halfway mark. Third, there is the anthropology background and some fascinating lore on ancient Peruvian superstition and religious symbols in South American culture. Finally, there is a bravura courtroom performance in which Judge Peck acts as defense attorney for one of the brothers who is accused of murder. It all makes for a highly enjoyable mystery.
﻿
Christopher Jannichon, archaeologist, has been called back from Peru to his Wisconsin home by a series of strange postcards containing weird markings and ominous warnings. When he arrives at his home he finds similar markings drawn in the snow on the grounds of the Prairie estate and learns his brother Cornelius has also received similar anonymous postcards with odd symbols. The dominate symbol is described as "a cross topped with a cedilla" (though the illustration on the DJ shows a cross topped with a circumflex), known to both brothers through their extensive reading of Incan culture as the "God-help-us!" mark. It is clear to the Jannichons that someone is threatening them and they speculate it may have to do with Christopher's research in ancient Incan life. They consult with Judge Peck who is invited to stay the weekend when several relatives and friends are planning to visit the two Jannichon brothers. That night their cousin Edna suffers a mysterious fatal attack. She is found dead on the floor of her bedroom an expression of terror on her face. Beneath her body is a slip of paper with one of the "God-help-us!" symbols drawn in red ink. The threats have come true, but was Edna the intended victim?

The detection here is well done and, for the most part, follows all the tenets of fair play. Judge Peck learns that both Edna and Cornelius used a similar face powder (Cornelius has sensitive skin and used the powder as an aftershave emollient). On the night of the death Cornelius told his housekeeper the jar of powder in his room was not his and to put it back wherever it belonged. Judge Peck is sure that the powder found in Edna's room was the means of death somehow altered though no sign of poison is found during the post mortem. He is also certain that Cornelius was the intended victim since the powder was originally in his room. Then Christopher suffers a similar attack in which he has difficulty breathing and nearly asphyxiates. He is saved just in time. There seems to be a mad murderer in the Jannichon household armed with some mysterious means of causing death. The investigation will uncover a long lost relative, a convoluted inheritance, and a family history of respiratory ailments that are crucial to the solution of Edna's murder and several murder attempts of other characters.
﻿
As is the case in John Rhode's best books it is the painstaking detection, collaboration between medical experts, and Judge Peck's keen intuition that lead to the discovery of a truly diabolical murder method. In the gripping courtroom sequence that might have been lifted out of a Perry Mason novel Judge Peck calls forth witness after witness slowly building his case and making a startling revelation that brings a collective gasp to the entire courtroom. Though there are a few pieces of the overall puzzle that come as last minute revelations in the testimony of two witnesses I still laughed in amazement; Peck's solution makes for a stunning surprise.

If you want to read a Judge Peck book I suggest that you make this your number one pick. Most of the Judge Peck books are extremely scarce with Sign of Fear and Three Who Died being the most uncommon of the series. This book is nearly impossible to find and I count myself among the lucky to have found a copy. There is only the US hardback edition (Loring & Mussey, 1935) and not one paperback reprint in either the U.S. or the U.K. If you're lucky a copy may turn up in a library somewhere.