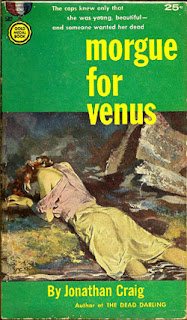 Had I read Morgue for Venus (1956) first in this excellent series of police procedurals I may not have continued onwards. It doesn't have the usual spark of originality or exceeding quirkiness to be found in the later books. But having read four others prior to this sophomore novel of Jonathan Craig I can see how he is beginning to develop his own original formula for a subgenre that has grown into at least two new subgenres – the forensic pathology thriller and the forensic anthropology thriller. Interestingly, as in the case of the variety of forensic thrillers where the identity and the slow reveal of the life of the victim takes over the story Craig in Morgue for Venus is most interested in Lucille Taylor, the hapless victim of the piece.

Already I am coming up with a list of typical Craig characters that will appear in his series. We have the middle-aged couple in which the husband is a weak-willed Milquetoast under the control of a mean-spirited harridan (in one book the wife is also a husband beater!); the adulterous work relationship; the jealous lovers; a cadre of police informers; and at least one male character with a bizarre sexual fetish. No lesbians or gays in this debut, but they crop up often in later books. After all, the books take place in the environs of Greenwich Village.

Lucille Taylor, strikingly beautiful in life, is found dead in the Hudson River. After matching her identity to that of a young woman who appeared in the missing persons file Pete Selby and Stan Rayder, the police detective duo, are faced with a few odd details. What happened to her expensive engagement ring? Why was she not wearing any underwear? Did she drown or was she killed by some other method and then dumped in the river? Most importantly who exactly was Lucille Taylor? Each interview with relatives, co-workers and friends adds another layer to a complex portrait ultimately revealing a young woman who was not as innocent as she presented herself. A sexual tease starved for attention Lucille was secretary by day, sexual adventuress by night. The two cops trace her after hours life to a posh apartment that serves as a shooting gallery where drugs, sex and porn provided entertainment for a hedonistic crowd. 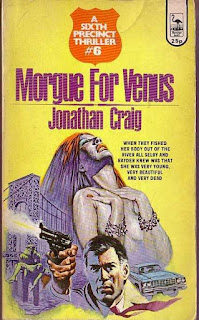 And what would a review of a Jonathan Craig book be without the FREAK OF THE WEEK? In Morgue for Venus that role goes to Johnny Noland, a creep with a bridal fixation. He is the mail room guy at the photo studio where Lucille worked and had all the dirt on an adulterous affair she was having with her boss. When the two cops from the 6th precinct visit Noland in his fetid cramped one room apartment they are first struck by one wall of the apartment that is covered floor to ceiling in a collage of photographs composed solely of models dressed in wedding gowns and bridesmaid's outfits. During the interview he confesses that he has fallen in love with Lucile, describes how he was planning their first date together, and then dishes the dirt on Lucille and their mutual boss. Hell hath no fury like a bridal fixated creep scorned. But to be fair he's only trying to bring about justice for the object of his failed desires.

For those who have missed my other reviews of this worthwhile series of police procedurals – books that predate Ed McBain's books about the 87th Precinct – I offer the list below for your perusal.

Next month we look at book number five in the series: Case of the Petticoat Murder.
Posted by J F Norris at 4:31 PM