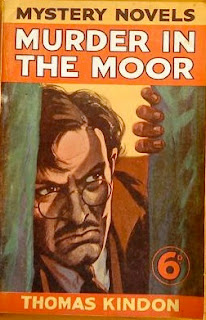 The policeman on holiday has been done to death in the detective fiction genre, but Thomas Kindon's engaging and lively Murder in the Moor (1929) may be the quintessential example. You probably know the drill here – a policeman goes on vacation intending to be as far away from crime as he can manage yet invariably stumbles upon a corpse that is almost always a puzzling murder and he cannot resist uncovering the who, why, and how of the crime. What Kindon does with this well worn territory is very different and highly original on all levels. Best of all the book is wittily told and often hilarious when Kindon lets loose with his obvious fondness for outrageous humor and bizarre characters. Most appealing of all is his unusual detective Peregrine Clement -- aka Pithecanthropus -- Smith.

"Pithecanthropus? You mean like the Java Man?" I hear you cry.

Yes, indeed. For Smith is described in the third paragraph of the first page as "over six feet tall, and broad in proportion – and, moreover, very ugly…, for his face was astonishingly like a chimpanzee's." The illustration of Smith on the paperback edition shown on this page provides him with a much handsomer countenance than I would imagine Kindon intended. It is his apelike features that inspired a wiseacre copper who had recently attended a lecture entitled "What Evolution Means to YOU!" to bestow upon Smith the anthropological nickname which has stuck ever since. Even the crooks have learned to call him Pithy Smithy.

The very involved plot is far too complex to reduce to a summary of a few sentences or even a few paragraphs. And it's so enjoyable I would be tempted to describe all my favorite characters and go into great detail about the funniest moments and most ingenious plot devices. I better not do that! Suffice it to say that Smith is on a walking holiday in rural English countryside that resembles Dartmoor though the area is completely renamed with fictional towns and landmarks. Over the course of the story rich in incident and adventure he encounters not only a puzzling brutal murder, but an escaped convict, industrial espionage, counterfeiting, revenge, and a crazed inventor of bizarre clockwork devices.

From the opening pages when Smith meets up with the Scottish engineer Angus MacFee, in love with his prismatic compass and fond of calculating the proper hiking routes using his ordnance survey in combination with the compass, to the final thrilling pages in which Smith saves the convict Jimmy Toggle from a fiendish deathtrap created by the mad murderer the story is gripping, engaging, literate and witty. The detection is fascinating and also adheres to the fair play rules.  We even get a bit of Oppenheimesque spy stuff and a pulp magazine bit of gruesome bizarreness in the final chapters that would be the envy of Edgar Allan Poe.

The cast of characters are far from the types of cliches you would expect from this era. Who could resist the kooky authoress, Cynthia Trebogle, who revisits the murder scene with Smith pontificating on her nutty theory that the murder was committed by "a priest of neolithic or druidical tribe" using a stone axe.  Or the irascible Joshua Hubblesby who rhapsodizes on his idea of a real holiday being nothing more than riding his favorite train lines and sleeping. Even the police provide entertainment. Captain Hector Madan, Smith's superior, is a blustery impatient straight man providing many Margaret Dumont moments to Smith's insolent Groucho style quips. The officious younger inspector put in charge of the case is shown up many a time when he doggedly sets his eyes on MacFee as suspect number one while Smith points out he couldn't possibly be the killer due to the timing involved in MacFee's alternate route he took near the murder scene and suggests the inspector do the hike himself as proof. 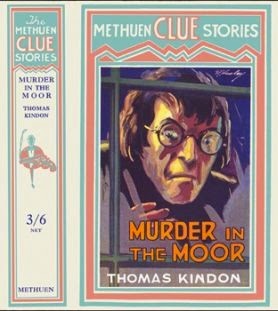 But now the bad news. Thomas Kindon's 1929 detective novel is yet another of those books you will be hard pressed to find. I stumbled across my copy in the Chicago Public Library then wondered if any used copies are out there. My dutiful internet search turned up exactly ten copies in various editions for sale ranging from $35 to $158, plus one dealer in Germany who wants $197 for his copy (a US edition from 1929) that is just plain greedy. The book was reissued in Jacques Barzun's "Top 50 Classics of Crime" series published by Garland that was intended solely for libraries. I suggest you check your local library first. Chances are it may be there.
Posted by J F Norris at 1:00 AM