FFB: Happy Are Those Who Mourn - Andrew Greeley 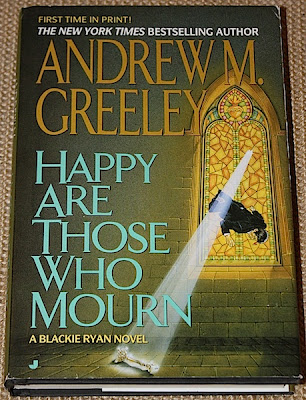 I bet you never knew that the Catholic Church has a little known law on its books that recognizes people who have made a "contract of love" with each other to be legitimately married in the eyes of the Church regardless of the couple never having their marriage consecrated in the rite of matrimony by a priest. Stunned? It's true and it's only one of many eyebrow raising bits of information about canonical law unknown to most Catholics (or anyone else, for that matter) that are revealed in Happy Are Those Who Mourn (1995), a fascinating mystery novel by priest, sociologist, and one time college professor Andrew Greeley.

I approached this book that deals heavily with the business -- both financial and spiritual -- of the Catholic Church, specifically the Archdiocese of Chicago, all in the context of a murder mystery with a air of smugness. Having been raised Catholic (though no longer attending mass nor participating in the rites and sacraments) I thought that I knew everything about my religion and that I would be bored with a rehash of the theological aspects that would most likely be written in simple to understand terms for a wider non-Catholic audience. I was hoping that the locked room murder plot would be enough to keep me interested. Instead I was slapped in the face by irony.

As I read I was captivated by all the discussions of canonical law and the financial obligations a U.S. parish has to the Archdiocese and to the Vatican. The plot hinges on a murder in a locked room and is mildly puzzling, but is not the real hook of the piece. The mystery is more concerned with the slow reveal of past secrets that eventually involve arcane and truly shocking laws in the Church. In particular I was astonished that there is a law dating back 1300 years that seems to condone a certain mortal sin or, rather, in extremely specific circumstances the sin in question is not a sin at all and does not need to be confessed. I was blown away by this. 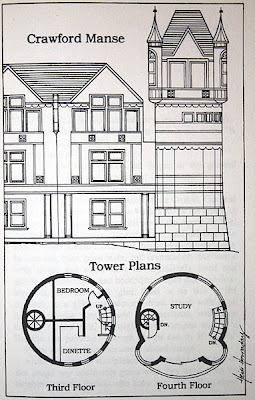 "Blackie" Ryan is asked by his immediate superior Cardinal Sean Cronin to visit a suburban Chicago parish where the pastor, Monsignor Charles McInerney, recently died. It appears that the strange tower room in the rectory where the monsignor died is being haunted by the his spirit. Not only is the tower room in the rectory plagued with weird phenomena -- the TV and lights go on and off by themselves, books are thrown off of bookshelves, footsteps are heard in the outer hallway -- the church organ bursts unaccompanied into inappropriate music, and the electronic church bells chime Christmas tunes in the middle of a hot summer. Cardinal Cronin is not pleased and he will not have the weird goings on in Woodbridge become the subject of tabloids or the lead story of local TV news crews. Blackie has made a name for himself as a debunker of spook shows so he is sent to the suburb to put an end to the apparent poltergeist activity.

While in Woodbridge Blackie learns that the dead priest was intentionally murdered and that his death was covered up to appear accidental. He also uncovers some questionable financial dealings with the parish money. He and the current pastor approximate that somewhere there is a missing $10,000,000 that belongs to the Archdiocese. Where did it go? Was that the motive for the murder of the priest? And what has Lynn Reed, a local woman dubbed the town nympho by a staunch nun, have to do with the death? She is Woodbridge's most beautiful woman and is known to flirt with all the men whether married or not. She was also was seen leaving the rectory carrying out boxes of documents a few days after his death. Is there some sort of conspiracy at work in Woodbridge?

The contrast between Cardinal Cronin and Bishop Ryan makes for entertaining springboard to the book's complex web of financial chicanery, sexual dalliance, and madness in the suburbs. While Cronin is a vociferous, temperamental whiskey taking boss who likes to lecture and will hear no arguments, Blackie is laconic, calm and almost stoic. He likes to reply to questions with a variety of adverbs among which "Arguably", "Doubtful", and "Indeed" are the most common. He jokes about his "invisibility" being one of his best attributes in his detective side work. Like Father Brown he is often taken for granted or completely ignored though he is very much present and all-observing.

The most captivating part of Blackie's character is that he is a truly modern priest. He refers to God as She, he does not believe in the concept of hell, he views sexuality as an expression of human spirituality, and above all he sees God as all-loving and forgiving to the extreme. Most of the time this laid back priest is as affable as can be, but can be stern and unyielding when his patience is tested by fools and braggarts. There are quite a few of those types among the parishioners of Woodbridge. Blackie makes for a good detective, too.  He is skillful at getting people to drop their masks and show their true selves.  It's not just Q&A, however, there are a few nice touches of legitimate old-fashioned detective work and some intuitive reasoning that come into play.  Plus there is Blackie's belief in the existence of psychic phenomena, considered heretical by his Cardinal boss, but a genuine and welcome surprise to me. As Greeley slyly writes about the priest's dismissal of the poltergeist activity as "nothing but cheap tricks" I was convinced that the ghostly mischief would prove to be nothing but fakery, and yet... But that should be left for the reader to discover on his own.

Well read devotees of crime fiction may want to draw comparisons to John Dickson Carr and G.K. Chesterton in the story of a haunted tower, supernatural incidents and a locked room murder. There may be slight coincidences in those classic writers' books and stories but the true core of Greeley's story is not in the puzzle. Greeley is most interested in the secrets kept hidden in the hearts of Woodbridge's citizens. The heart of the story is quite literally found in the human heart -- in the desires and longings of the lonely, in the perverted pleasures of the corrupt, in the compassionate forgiveness of past transgressions, in the differences between a legal marriage and a marriage of the heart. 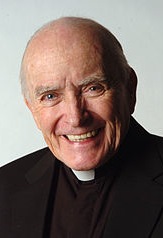 Andrew Greeley is something of a celebrity here in Chicago but I had never read anything he wrote until last week when I chose this mystery novel. He has written extensively in a variety of non-fiction (theology, psychology, self-help, sexuality) and fiction (fantasy, erotica, mystery). A best selling author throughout the 1980s, the subject of numerous TV, magazine and newspaper interviews, attention to his books and work has since dwindled. Most of his books are now out of print. There are a total of seventeen books in the Bishop Blackie Ryan series, most of them featuring plots with locked room murders, impossible crimes, and ghosts. This was a superior introduction to the series and I plan to read more. Blackie Ryan is one of the more fascinating religious sleuths out there. I never dreamed a mystery novel could enlighten me about my own religion.
Posted by J F Norris at 1:00 AM