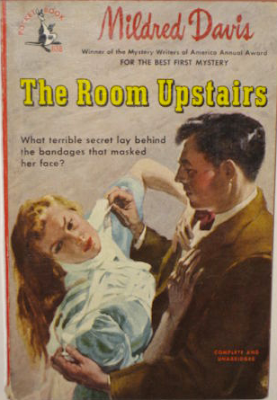 I've written about Elisabeth Sanxay Holding's special brand of suspense and crime that features menace in the suburbs before. I've talked about how Charlotte Armstrong and Margaret Millar built upon her legacy. Now I have discovered one more talented and unsung woman mystery writer who belongs in their company -- Mildred Davis. Davis sure knows how to put the mystery back in the mystery novel. The opening chapters of The Room Upstairs (1948) are filled with so many questions you can't help but keep turning the pages. Anthony Boucher wrote in his San Francisco Chronicle review: " If there had never been a 'novel of suspense' before, the phrase would have had to be coined to describe this story." A better capsule blurb was never truer.

Davis takes a fairly tired convention that goes all the way back to the Gothic novels of the 18th century – a room occupied by a mysterious recluse – and gives it a thorough shaking up in her modern tale of an accident victim who has her entire family under her spell. She manages to withhold the identity of the room's occupant for nearly the entire book and does so in a tantalizingly wicked way. The story is only marginally a  detective novel and while the plot does involve the investigation of a crime it is all done so subtly and underhandedly before the reader knows it the book transforms from one of mystery and crime into a deeper exploration of misplaced familial affections, sibling rivalry and the malaise of the spoiled rich.

The plotting and engineering involved in the first few chapters of the story is a marvel to behold. Davis manages to create four separate mysteries: who is Gene Swendsen, the new chauffeur? What really happened to Kitten in that auto accident? Why is Hilda, her sister, such a nervous wreck? And is the person in the room upstairs really Kitten? Mysterious phone calls to the man who delivered Swendsen to the Corwith home add to the suspense. Each chapter ends with an italicized section that give us insight into "the patient" in the room upstairs. We know the thoughts and feelings of "the patient" and watch as this person turns the pages of a diary written, of course, in the first person but with all references to Kitten in the third person. The diary starts out with glowing entries showing admiration for Kitten then reveal petty envy and finally explode into bitter hatred. But then the diary can't be Kitten's, can it? Why refer to herself in the third person? And if it isn't Kitten's diary, whose is it and how did the patient get a hold of it?

There are other sinister touches as well. A cocktail party becomes the scene for a dangerous experiment in hypnosis with the trance induced victim being guided to act out a murderous impulse. It's all done as a perverse form of entertainment among a group of college age men and women who were part of Kitten's circle of friends. Some friends! After having been told that no one under a hypnotic trance can be induced to do anything against her will the entire roomful of college age partygoers watches in amazement as Helen Lewisohn, the hypnotized subject, attacks a guest. Swendsen interrupts the "game" just in time to prevent serious injury.

The majority of the novel deals with chauffeur Gene Swendsen's covert investigation of the family and the events leading up to the accident. He sneaks around the house, examines the car, and subtly gets several fellow servants and Corwith family members to confess to him all their hidden feelings about Kitten. Hilda, however, is onto him. She confronts him repeatedly accusing him of being an impostor. "You just don't seem like a real chauffeur," she tells him. "Then who am I?" counters Swendsen.  The most fascinating parts of the story are these scenes between Hilda and Gene as they engage in a dance of seduction, a trading of confidences, a duel of wits to see who will drop their guard first and who will give in to the other. As the story progresses we begin to see that not only does Gene want the truth he wants Hilda. This is a masterful work of suspense and mind games, a little bit of a detective story and a whole lot of baffling mystery. If the melodrama gets piled on a bit too heavy in the last sequence and Davis allows the usually laconic Swendsen to become long-winded with psychological explanations in the wrap-up this is no real mark against the book as a whole. I thought overall it was a dazzling display well worth the Edgar Award she won for Best First Mystery of 1948. The Room Upstairs impressed me enough to go out and find three more of her books.

For more about Mildred Davis see this tribute website put together by an ardent fan with input from the writer herself and her daughter.