The Case of the Seven of Calvary - Anthony Boucher 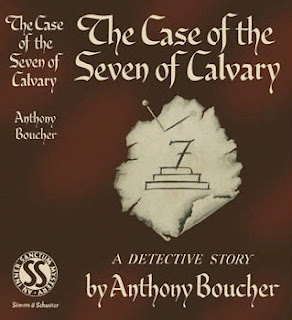 Boucher's first mystery The Case of the Seven of Calvary (1937) is a daring piece of crime fiction in this heyday of the Golden Age when everyone seemed to be breaking the rules. He joins other detective fiction iconoclasts who did things like have a first person narrator turn out to be the murderer, or have the detective turn out to be the killer, or have an ambiguously supernatural solution to a murder. What he does exactly is something I will not reveal, of course, but it seems to me to be one of the first rule breaking books of its kind for this period.

We have here yet another academic mystery in which John Ashwin, Ph.D. acts as the armchair sleuth who works out the puzzling aspects of three strange murders without ever leaving his book lined home. Ashwin is a professor of Sanskrit at a California university (modeled after Berkeley). Like another well known detective who never leaves his Manhattan apartment Ashwin has his own Goodwin-like footman in the person of Martin Lamb, a researcher in German at the university, who delivers first hand accounts of his investigations to Ashwin. Lamb says something self-deprecating of himself in relation to the murders (something I guess another person might call "un-PC" ) that I marked and have to include here:


"You may have gathered that I've been taking a lot of interest in these deaths.  Well, I am that worst abortion of nature, an amateur detective..."

Wonder what the Right to Lifers would say about that?

The book seems to be influenced by the Van Dine school both structurally with the "author" acting as narrator and in its content with an arch tone, a sophisticated and cosmopolitan cast of characters, literate and intellectual dialogue plus -- most Van Dine-ish of all -- a story overloaded with all sorts of arcane knowledge like Spanish plays in translation, Gnosticism and other Catholic heretical sects, and even Gilbert & Sullivan operettas. Ashwin also discusses Sanskrit literature tangentially in a way that reminded of Philo Vance's habit throwing around esoteric trivia that usually has nothing to do with the murders in the Van dine books. In this case most of the esoterica will be pertinent to the crimes and reading about it is much more fun that Vance's usual pedantry that tends to annoy. It does with me, at least.

A professor is found dead on the campus only a few feet from the home of a young student he apparently was visiting. He's been struck with a blunt instrument and the weapon cannot be found. By his body is found a scrap of paper with a diagram that looks like "a curious sort of italic F, mounted upon three rectangles shaped like steps." The reader should not be fooled for an instant by that description. This is, of course, the Seven of Calvary of the title (see the DJ of the 1st edition above). But just what that symbol signifies will remain a mystery until about the book's halfway mark. 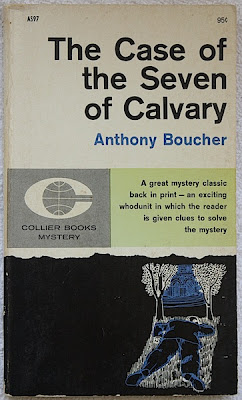 And speaking of not being fooled -- this first murder had a couple of puzzles attached to it that I figured out easily and was rather disappointed. I wondered why Boucher made it all so transparent. But then that smart man Professor Ashwin reveals that the first victim was mistaken for someone else and the whole story turns upside down. By the end of the book two more deaths occur and I was completely taken in by all the later misdirection. I doubt anyone will discover the truth behind all the deaths. It's a devious piece of work that is definitely a real rule breaker for the 1930s.

For fans of devilish puzzles and intellectual academic mysteries this is a book I highly recommend checking out. Though you'll be hard pressed to find a hardcover copy of the first edition at an affordable price, there are cheap hardcover reprints in Macmillan's "Murder Revisited" series and the Collier paperback, a copy of which I managed to obtain for under $5.
Posted by J F Norris at 1:00 AM