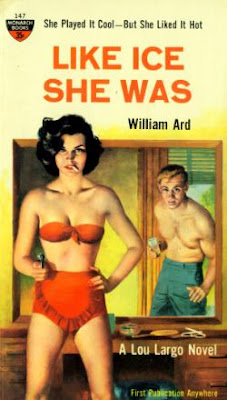 WARNING: This review is littered with spoilers.

I will confess that I purchased this book primarily for the very cool cover art.  Then I learned that William Ard was a favorite writer of Mike Nevin's who is one of the people who turned me onto Harry Stephen Keeler and taught me how to better appreciate the work of the brilliant Cornell Woolrich.  I trusted Mike's taste in great books and neglected writers and decided to read Like Ice She Was (1960).  I think I picked the wrong one to start with.

Lou Largo is hired to find Madeleine Mann, a former prostitute from Montreal who stole a million dollars from her casino owner husband Nick Mann. Seems that money was routinely packed up in suitcases and flown from Canada to Miami where it was supposed to be stowed away in Mann's Florida home. One of these Canadian cash shipments never made it to its final destination. The pilot Fred Cooper and Madeleine helped themselves to the money, Madeleiene decided she no longer wanted Nick and took off with Cooper and the millions for California. Now Nick Mann wants Madeleine and his money. Lou heads to Saratoga, New York to find her.

Along the way he manages to pick up Joan Martin, college student in criminology, as a sidekick. She approaches Largo with an idea that she follow him along on one of his cases for a research paper she is writing on the life of a private investigator. At first Lou nixes the idea but when Joan shows up unexpectedly having successfully tailed the private eye and rescued him from some thugs who intended to beat him to death she proves herself a worthy partner. They become an interesting team in more ways than one.

Lou's idea is that they pass themselves off as a philandering couple at the motel where Madeleine, now calling herself Marion Bouchard, has holed up. He cleverly books the room immediately next door to her. Luckily for him the walls are paper thin and the bed is extra squeaky. His plan? He will create the illusion that he and Joan are sex fiends with a lot of hysterical sound effects and exaggerated sex talk. These scenes are hilarious and one of the few parts of the book I really enjoyed. All this sex is meant to arouse the attention of Marion/Madeleine who we soon learn "has the coldest skin of any dame [Lou] ever came across." (And you thought the title was a clever attempt at metaphor.) Most people would be disgusted or annoyed by loud screwing accompanied by ridiculous running commentary and ask to move to a different room. Not Marion. She is completely turned on. She's seen Lou swimming in the pool showing off his trim muscled body and now imagines him to be a Titan of a sex partner. "Quel homme! Formidable!" (She actually says that.) She desperately wants Lou which is just what he wanted to achieve. 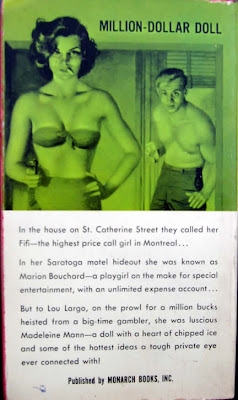 The story is pretty thin. Like the instructions on a shampoo bottle we get a formula like this – chase, sex, beating, repeat. Lou stumbles upon everything too quickly by asking only a few questions of people who are all too willing to spill the beans - including Madeleine's own mother. The bad guys, headed by a corrupt ex-cop from Montreal, are always a few steps behind him ready to beat him to a pulp demanding to know what exactly he's up to. By the midpoint you think he ought to be hospitalized but he carries on valiantly like a cartoon superhero sustaining a large collection of bruises and cuts. Yet somehow with all his injuries he still manages to be amazing in the sack. Vive la résilience!

Interspersed with the beatings and the sex play between Marion/Madeleine and Lou we get a lot of pining and longing from Joan. She wants Lou just as much as Marion, but he keeps calling her "kid" and "sis" and she thinks she hasn't a chance. Until that is she starts dressing like a woman, putting on makeup and changing her hairstyle. Then Lou takes notice and they play out a genuine torrid sex scene complete with squeaking bed. Immediately after Lou calls her "girl" and Joan is delighted. She's graduated from kid to sis to girl. Ah, womanhood!

When Madeleine discovers that Lou has forsaken her sexy charms for those of the younger more beautiful and less trashy Joan she vows revenge. So she goes next door to her motel room where Fred Cooper has been getting drunk with every passing hour and stabs him repeatedly. Then she frames Lou for the murder and takes off. This is the level of nonsense that the book descends to. Just when you think you've hit the absolute nadir the story lathers on more cartoonish behavior. The thugs show up, kidnap both women and plan to kill them and dump the bodies in a lake. The bad guys even tie concrete blocks around their feet. But Lou is there to save the day aided by a deputy sheriff and a posse of police.

I will give Ard credit for one scene that you rarely get in these kind of books. Nick Mann keeps insulting one of his thugs and finally calls him a fairy which seals his fate: "Tony triggered the gun once, and blew the gambler's brains out with a slug between his eyes." I always wonder why the bad guys endure insult after insult from the one in charge. Tony, unlike most of these bad guys, takes no crap from anyone even his boss.

Some of my other favorite lines:

"Lou guessed that she had squeezed that forty-inch bust into a size twelve gown to maybe take your eye off the little spinning ball. Not Largo's though" (The woman works the roulette wheel in a gambling joint.)

"Quel homme!" she thought admiringly as the creaking springs went on. "C'est magnifique! What a bull she has for company!"  (Did you ever hear anyone from Quebec province talk like they were in a Cole Porter musical? Marion was also "listening raptly" in the previous paragraph.)

"He flashed her his boyish grin, looked as guileless as Li'l Abner with the Dragon Lady." (Lou is anything BUT boyish.) 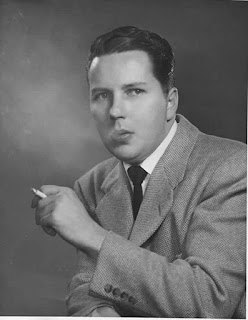 After doing a little online research I stumbled across an excellent website devoted to Ard with information supplied by the writer's widow. He died in 1960 at the early age of 37 from cancer that he foolishly believed he did not have despite multiple warnings from doctors. This book was one of the last he wrote himself. Other Lou Largo books were ghosted by Lawrence Block and John Jakes. So it looks like if I want to discover more about Ard's writing I'll have to go back to his first books in the early 1950s. I ought to give him another shot. The Timothy Dane books are supposed to be completely different and much better. Stay tuned for a possible reassessment.

To educate yourself about William Ard visit his tribute website here.
Posted by J F Norris at 12:25 AM