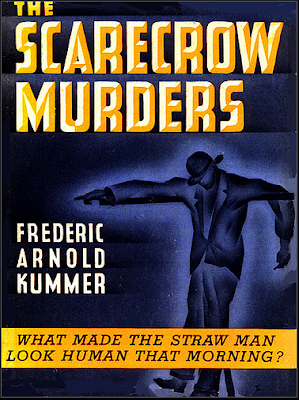 Anthony Morrison, son of businessman w/ gangster contacts, is found brutally beaten and shot in the cornfields bordering his father's estate. What makes the crime doubly strange is that Morrison's body has been prominently displayed on a scarecrow's scaffold with his arm pointing ominously at his father's home. Stuffed in the pocket of his jacket is a slip of paper with the famous biblical quotation "an eye for an eye and a tooth for a tooth." Morrison's facial injuries reveal a punched in eye socket and some missing teeth. The very same day the body is discovered Dick Bowley turns up at Dr. Richardson's office with a sprained wrist and an ugly gash on his face requiring multiple stitches. Bowley was the rival in a war of affection over Mary Lee Perrin, a freelance stenographer who was often hired by Tony Morrison. Local police chief Lem Purnell lists Bowley as the prime suspect in Morrison's death. Judge Tyson thinks otherwise.

There is some good detection in The Scarecrow Murders (1938), a much later work by Kummer who began his career as a writer for the various popular fiction magazines (All-Story Weekly, Blue Book, The Cavalier, among others) where his old-fashioned, complex crime stories were originally serialized. He was a prolific writer who was one of the smart guys who learned to change with the times in order to sell his work. This novel is markedly different from something like The Ivory Snuff Box (1912), one of his earliest books published under his pseudonym Arnold Fredericks. The dainty manners, quaint dialog and relatively civilized criminal characters of the early 20th century are replaced by volatile emotions, harsh speech and vicious bloody murders that characterize the tougher crime novels that were in vogue in the late 1930s.

This is the first appearance of Judge Henry Tyson who also does detective work in a sequel, The Twisted Face (1938). Here he teams up with Dr. Richardson doing most of the real detective work while Chief Purnell stubbornly stick to his theory that Bowley is responsible for the murders. Bowley's belligerent and confrontational manner only serves to reinforce Purnell's suspicions. Tyson instead is more interested in Hart, a mysterious car salesman who visited Mary Lee Perrin's office. He and his car have vanished but he leaves a trail behind him like a smoking gun. Is he really a used car salesman or perhaps a private detective digging up dirt about Morrison's shady business practices?

The Scarecrow Murders is one of the unusual American detective novels that uses a rural setting as opposed to the frequent urban locations found in the genre. The rural setting is accompanied by rural mores, class distinctions and prejudices. The most striking part of the book is that a pair black servant characters (lamentably referred to by the usual racial slurs) are seriously considered as suspects. Rarely have I encountered this in a 1930s novel set in the rural American south. Black servants usually appear, as they did in films of the era, as stereotyped comic characters. Not so here. Mrs. Taylor (no first name!) is an attractive light skinned black woman and there is a rumor that Morrison may have been interested in her sexually thus igniting a jealous ire in her husband. When Amos is also found dead in the cornfield, his face blown off with a shotgun, the Judge and Purnell are worried that they may be a homicidal maniac on the loose.

Kummer does good work here and I'd say if you come across this odd mystery novel you'd do well to check it out as a better example of an early form of country noir. It often turns up in the paperback digest edition at a usually affordable price. There are currently a few copies for sale on the internet.
Posted by J F Norris at 7:00 AM