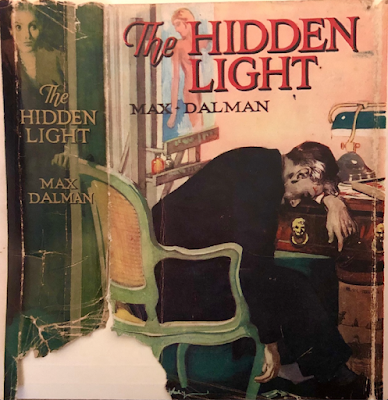 THE STORY: Loathsome portrait painter James Garrow is shot in his locked, bolted and barred studio. There are only two entrances and Garrow has the only two set of keys. One set of those keys is kept locked in a safe and only the painter has the combination. His death appears to be a suicide but we know better because in the opening chapter we know that someone entered the studio while Garrow was drawing a pastel portrait of a woman who was haunting his thoughts. And our detective hero David Marchant knows better when he breaks into the room and sees chalk dust on Garrow’s fingers but a visibly clean weapon. Who got into the room and shot Garrow and managed to leave it locked if the only keys were still in the room?

The Hidden Light (1937) of the title refers to a second mystery related to the murder. Just after Garrow was found dead a light went on in the room indicating that perhaps the murderer was still inside looking for something. The sun was beginning to go down and interior light from lamps was needed to see anything in the room. It was not a flashlight as the witnesses who reported seeing the light go on were servants well acquainted with the lamps in the room. A few minutes later it went out again and of course no one was in the room when Marchant and two others entered to find Garrow’s body. So we have a genuine locked room murder and an impossible problem of the “hidden light”.

THE CHARACTERS: David Marchant was hired by Garrow for an unknown reason but his summons was urgent and so he headed out to the Garrow home as quickly as he could. We, however, know that Garrow hired Marchant to investigate death threats sent to him in a series of anonymous letters. We see Garrow poring over these letters in the very first scene of Chapter One prior to his murder. Some letters were left out on his desk when he died, but when Marchant breaks into the studio the letters are gone. This is an interesting use of dramatic irony, a convention not often employed in traditional detective novels. Dalman allows the reader to know things ahead of the detective and we keep waiting for Marchant to stumble onto existence of the letters so he can make progress quicker than the police.

Kay Garrow, the painter’s much younger wife, was trapped in a loveless marriage suffering almost daily emotional abuse from her cruel husband, She becomes suspect number one in the eyes of the police. But Marchant is reluctant to accept this premise. In an another ironic moment Mrs. Garrow offers up the local gossip that she is having an affair with Richard Garstane, another artist Garrow hired to restore some frescoes in a chapel on the grounds. Garstane is emotionally unbalanced and perhaps more in love with Mrs. Garrow than she is aware of. Mrs. Garrow gives Marchant this information in an attempt to appear frank and honest. She swears she is innocent and asks Marchant if he will work for her in order to clear her name. He accepts on one condition – if he she discovers all evidence leads to her guilt then she must relent and allow him to turn her in to the police. Mrs. Garrow accepts his challenge.

But there are others in the house who have motive and opportunity. Jessica Garrow, the painter’s daughter from his first marriage, spent some time in a hidden alcove nearby the entrance to the studio supposedly reading a book. Peter Amberwood, Garrow’s secretary, was in a nearby room and was quick to come running when Marchant demanded to be let into Garrow’s studio. It is not hard to see that Jessica and Peter are trying to hide an intimate relationship; Marchant sees their sly glances at each other and is positive they are in love. They are caught in several lies and cover-ups before Marchant gets them to tell the truth of what they were doing the night of the murder.

In true Golden Age tradition the servants are far from minor characters in this story. Each one. from butler Keyne to maid Alice maid and even the cook. will all have important information to divulge to Marchant and the police before the culprit is uncovered. Alice, the maid, in fact has one of the most surprising secrets to reveal in the entirety of the book.

INNOVATIONS: And who is the woman in the pastel portrait that has been hidden under Garrow’s body? When Marchant finally turns over what he thought was a blank piece of paper and sees the face drawn in pastels he lets out a gasp. He recognizes the features of the woman and is truly taken aback. Dalman sends Marchant on a strange detour into the past lives of some of the suspects, uncovers false identities and a secret in Garrow’s past that will turn the case upside down.

The discovery of the anonymous letters coupled with the face in the pastel portrait lead to some marvelous detective work on Marchant’s part. He studies the postmarks on the envelopes, compares the towns to train schedules and pinpoints Bristol as a hub from where the letter writer must have been based. Once in Bristol he sets to work in libraries digging into Garrow’s past looking for a link to Bristol. This section is one of the cleverest and most exciting parts of the novel.

SUMMATION: The Hidden Light was my third Max Dalman mystery and, coincidentally, Dalman’s third mystery in his chronological output. The story is highly entertaining, the action never flags and all of the characters are fascinating to read about. Not a dullard in the bunch. Dalman almost succeeded in being as clever as he was in Poison Unknown which was my first and still my favorite of the Dalman detective novels. But I will have to admit that when it came to the denouement in The Hidden Light much of what was so intriguing and puzzling was revealed to be distressingly prosaic. The solution to the locked room is hardly brilliant, the mystery of the hidden light is rather obvious, and the identity of the villain relies on one of the hoariest clichés. I literally groaned. It’s so laughably bad that I’ve only encountered it three times in the hundreds of books I’ve read. Most mystery writers dare not ever employ it for fear of being ridiculed. Ah well…

Moving onto mystery number four in my small pile of Max Dalman books. He can write well and he is often genuinely imaginative with ingenious methods of detection. Hoping I find one as dazzling as Poison Unknown in the next three books I’ve lined up.