FFB: Someone from the Past – Margot Bennett 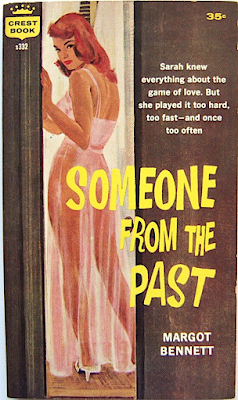 Sarah Lampson tells her friend and co-worker, Nancy Graham of some threatening anonymous letters. The gist is that the writer is one of her former lovers and he’s planning on killing her. The next day Sarah is found shot in her bedroom. Nancy’s current boyfriend Donald says he was there and found Sarah’s body. Nancy who we know is romantically interested in Donald immediately heads to the apartment (she has a key in case of emergency) and covers up all traces of Donald’s presence. But she lingers too long and just as she is about to leave she hears a key in the lock of the front door. So begins Nancy’s descent into a world of lies, deceit, and betrayal.

When the police begin their investigation Nancy is number one on the list. No amount of clever lies can dissuade them from thinking she is involved in the murder – if not the actual culprit then knowing more about the crime than she’s willing to reveal to the police. They have lots of questions for her and the keen eyed lieutenant has already noticed that Nancy has most likely been cleaning up around the apartment. But she is resolute. Nancy keeps lying and fabricating stories all to cover up for Donald.

Someone from the Past (1958) is engaging and aspires to be a suspenseful crime novel in the Hitchcockian vein. We know Nancy is innocent and shouldn’t be doing what she’s doing but we want her to get away with her cover-up. The first scene in the book showed Nancy and Donald together as Sarah was showing off her latest man, someone she is planning to marry. It looks as if Nancy and Donald are a good pair, but when Donald hears of the impending marriage he begins to re-examine his past affair with Sarah. It is quite possible that Donald really is guilty though he has no real memory of the night he spent with Sarah just before he found her dead body. 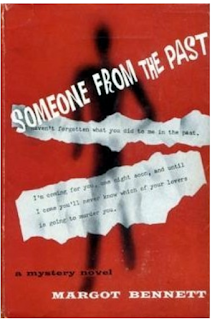 The novel works best when Nancy is the sole focus of the novel. She is quick witted and manages to lie cleverly in order to get the police to pay attention to her behavior and look away from Donald. But someone – the real killer, we are sure – is privy to some knowledge and is exploiting the police interest in Nancy by planting evidence and making it seem as if Nancy killed Sarah. Circumstances force Nancy to change her devious plans almost every hour and she begins to get careless. The killer seems to be a watching her every move but she is unsure exactly who it is among the small set of suspects. This all had so much potential to be a real edge of your seat thriller. But Bennett is much more interested in relationships. And that’s the major fault of the book for me.

When Sarah’s men enter the story the dialogue rehashes old relationships and the story lags. Sadly it actually gets dull and I almost gave up on it. We go into the past and find out how screwed up the men are and how Sarah exploited their affection and desire for her own purposes. I was irritated by the emphasis on backstory that infiltrated just as the cover-up and complications of the killer trying to frame Nancy were getting interesting. Bennett has a literary style with a rich vocabulary and love of imagery. She also has flair for dramatic action but unfortunately chooses to explore her characters’ thoughts over creating action and allowing this to reveal character. Directly after a nifty sequence like the part where Nancy tries to dispose of the gun she believes is the murder weapon we get a scene where we must listen to the vain actor Mike, Sarah’s first husband, talk about his pathetic life as a TV actor and endure Nancy’s irritation and annoyance as he flaunts his ego while dropping hints that he knows what Nancy is up to. I guess Bennett must think this is a modern approach to blending character scenes in a richly complex crime plot, but for me I was just as annoyed as Nancy every time Mike showed up at her door. 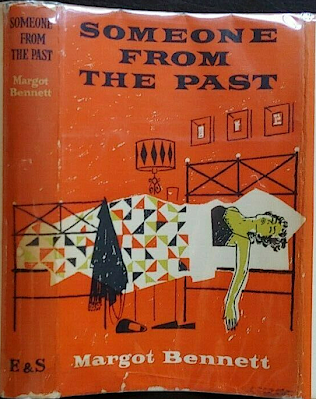 The reader would do well to pay attention to Bennett’s love of language for that turns out to be one of the only clues that leads Nancy to discovering who killed Sarah. If you’re particularly adept at spotting literary allusions and know your mid-20th century British poets very well you just might tumble onto the big clue very early in the book and spot the killer 140 pages before Nancy does. While the killer comes as somewhat of a surprise this clue is so esoteric that I really can’t call it “fair play.” And when the melodramatic ending comes it is closely followed by a sequence that fairly ruins the book. Nancy comes to a decision that to me makes utterly no sense at all. It pops up purely for the sake of offering what Bennet must think was a requisite happy ending. I didn’t believe it for a second and I can’t believe that Nancy would have been happy with her decision no matter what Bennett writes in the final sentences.

Someone from the Past earned Margot Bennett a CWA Gold Dagger for Best Crime Novel of 1958. Looking at the other books on the list I wonder if this was a sign of the burgeoning trend of crime author societies becoming more interested in rewarding literary novels of crime rather than straightforward crime novels that emphasize police procedure and puzzling plots. Ultimately Someone from the Past is a very mixed bag and not at all the kind of book I think deserving of an award for best of any year. Mostly because of that ending.

Based on mystery blog reviews I know many readers out there have read and enjoyed Bennett’s most recently reprinted book The Man Who Didn’t Fly (1955). I’ve reserved the only copy available at the Chicago Public Library and I’m waiting for it to come my way. Then I’ll see if her early work is any better. I’ve also found a cheap copy of The Widow of Bath (1952) her much lauded and very popular crime novel that was reprinted multiple times during her lifetime. I’ll be reviewing that book next month. So final verdict on Margot Bennett has yet to be announced here, but I am leaning towards a thumbs up based solely on Someone from the Past. Ironically, this book, her only award winning work of fiction, turns out to be her final crime novel. It was followed by three more books -- one science fiction, one mainstream novel, and one non-fiction book about the science of radioactivity -- published over a span of ten years after Someone from the Past.