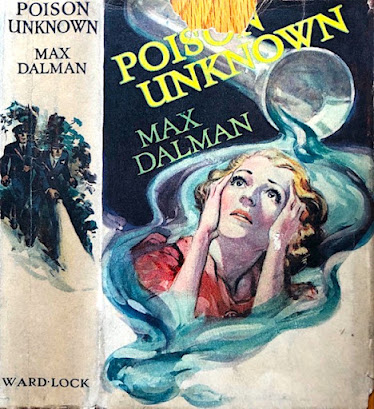 The Juliot Research Institute in Poison Unknown (1939) is a small facility entirely funded by a philanthropic grant.  The grant allows for paying the salaries of one professor, one teaching assistant (called a demonstrator in the context of the story) and to help finance the housing for four students who can live on the premises while furthering their unique studies.  Many of the students are involved in poison research and because this is a detective novel you can be sure that one of those students has an interest in the obscure often undetectable poisons of South America. Take a wild guess if a poison dart will be among the clues. Of course! and not one but two.

Professor Roseland is found murdered in the laboratory and at first it seems it an accident occurred, that an experiment that went wrong. Inspector Macleod and Supt. Carbis are suspicious and suspect a possible murder staged to look like an accident. There are indications that various hands have altered the scene where the body was discovered.

Sylvia Roseland, the professor's daughter, and Paul Danton, one of the students, turn amateur detectives competing with the police professionals in an underhanded investigation of their own. As their prime suspect the police have targeted Francis Seymour, Sylvia's boyfriend, and the "demonstrator" for the students. Sylvia is determined to clear Seymour's name.

Classics professor Dr. Boynley, interestingly, is a detective fiction fan. He happens to be in the study in an armchair unseen by Sylvia and Paul and thus has overheard their plan to clear Seymour's name. He then says to them:

"I'd be interested to know what models you propose to follow--Lecoq, Sherlock Holmes, the more recent, but infalliable, Dr. Thorndyke... That perhaps would suit you best, Mr. Danton?  the scientific method..."

Together the three devise an elaborate plan in order to prove that Seymour caught a 6:30 train, traveled to London, and attended a conference.  If their plan succeeds, then as Boynley concludes "his innocence is proven."

Meanwhile the police uncover another murder of a woman they believe to be a prostitute who has dallied with several of the men at the Juliot Institute.  When her true identity is discovered and the reason for her secret meeting that led to her death is finally disclosed the murder of the professor takes on a wholly new shape. Further evidence is gathered (in one case, literally extricated) proving that the professor's death was a cleverly executed murder.

Poison darts, talk of rare and undetectable poisons and the involved study of toxic chemistry may take up much of the investigation, but the ultimate murder means and motive come as a surprise in the end. The plotting was reminiscent of the kind of favorite trick of our mutual friend Dame Agatha often employed in his devilish murder mysteries. And I fell for it. Bravo Mr. Dalman!

Max Dalman (1905-1951) is not much read these days and I found almost nothing about him online.  He was born Max Dalman Binns in Scarborough and is the son of the equally forgotten British mystery writer Ottwell Binns. Both men are sadly lost to the vaults of myriad obscure crime fiction writers.  Based on this single novel which was engaging from page one, filled with unusual ideas, some clever plotting and exciting set pieces of detection I'd say Max Dalman is worth further investigation. Thanks to some luck with Illinois lottery tickets I netted $145 and used those winnings to splurge on buying some more Dalman books. Expect more reviews on his other novels later this year. 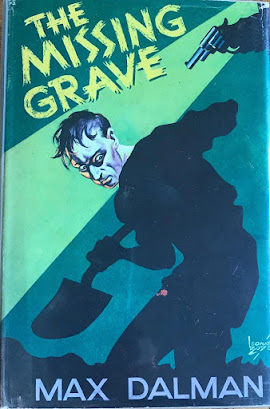