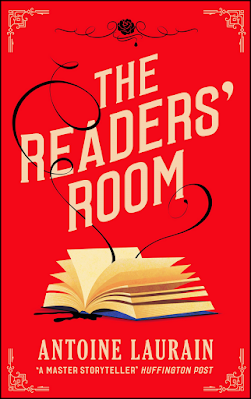 Antoine Laurain said in a recent interview on the Words with Writers website that he believes “…we need fairy tales not only for children, but for grown-ups too” and that “Novels have to be better than real life.” His most recent novel The Readers’ Room (2020), published in France as Le service des manuscrits, exemplifies both these beliefs. Additionally, Laurain also explores the power fiction has over real life. Is it possible for fiction to affect reality? Can fiction create reality from a story simply existing in a book?

Laurain has had a surreal experience with this himself. He reports that his prize-winning novel The President’s Hat (2012) was an example of fiction echoing reality without the author’s knowledge. A photographer told him that he owned Mitterrand’s hat. He told a story of how he was assigned to shoot photos of Mitterrand at a meeting in Provence back in the 80s. While on a smoke break away from the audience the photographer saw the president’s limousine and the door was open. The black hat was on the seat and just like Laurain’s protagonist the photographer was compelled to take the hat. He kept it for all those years. Laurain decided they would photograph the hat for the cover of his book. Prior to the photography session he looked inside the hat and there were the initials F.M. just as in his book.

In The Readers’ Room fictional events begin to replicate in real life. Sugar Flowers, a literary novel published to much acclaim, has been shortlisted for a nationally renowned French literary prize and is causing problems for the publisher because the mysteriously reclusive writer cannot be located. While the publisher tries to track down the author and get him (or her…the writer has the androgynous name of Camille Désencres and has never been seen by anyone) the novel’s action begins to take shape in real life. The story is of vengeful unnamed killer who murders several men by shooting them execution style with an old WW2 era German luger. When men are found murdered in exactly the same method as described in the novel, even down to the Nazi initials SS etched into the bullets, Violaine LePage, the director of manuscript services and the person responsible for finding the writer Désencres, comes under investigation by homicide detective Sophie Tanche. 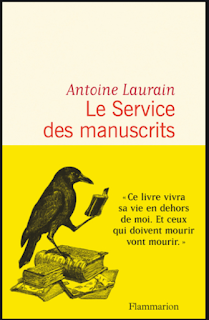 While the book models itself on the conventions of detective fiction it is a phantasmagorical genre blending novel more concerned with identity, love and family secrets. Violaine is suffering from a crushed leg and PTSD after a horrific plane crash. She seeks help from her psychotherapist amusingly named Dr. Pierre Stein who helps her piece together the lapses in her erratic memory and reminds her of several behaviors and incidents that shock Violaine. As she undergoes her treatment she is alternately appalled and mystified by Stein’s revelations. Simultaneously she is still trying to find the elusive Camille Désencres. Oddly enough Violaine is convinced Camille is a woman. But why so sure of that one fact and unable to remember so much about herself?

The less known about the rest of this intriguing plot the more enjoyment the reader will gain from the multiple storylines. In its brief 176 pages Laurain has densely packed meaning and incident into his story. Violaine toils away at the mystery of the missing author while pondering the mystery of herself. Sophie Tanche and her policeman colleague trade theories about crime solving in both “real life” and the world of books. Maigret is brought up several times. And books and authors are, of course, discussed repeatedly. We even get a sampling of paragraphs from Sugar Flowers in which Laurain gets to experiment with style, syntax and poetic metaphor in the guise of “Camille Désencres”. I’m sure it was a challenge for translators Jane Aitken, Emily Boyce, and Polly Mackintosh to capture the flavor of a different writer in those three or four sections.

The characters are as wildly imagined as the premise of the main story as well as the plot of the novel within the novel. From Beatrice, the elderly volunteer reader who manages to find true gems in the slush pile of unsolicited manuscripts to Edouard, the interior designer who comes to solve the problem of bookshelves in the readers’ room and in the process falls in love with Violaine everyone in the book is a unique individual. All of them are utterly believable despite all their quirks and idiosyncrasies which indeed make them all the more attractive and likeable.

It is rare for me these days to find works of contemporary fiction that are genuinely imaginative as uniquely original, that celebrate imagination, that are written first and foremost to transcend reality rather than to merely reflect it. “Novels have to be better than real life,” Laurain has said. A philosophy I fully agree with. And this novel is truly better than the reality we all are facing in this era of the pandemic. Treat yourself to something unique and refreshing and uplifting for a change. You so very much deserve it. And Laurain will be very happy to have gained another lifelong fan.