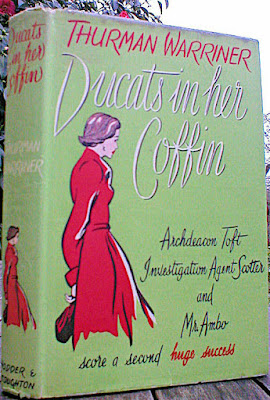 THE STORY: Patricia Shearstone meets Mr. Ambo by chance in an antiquarian bookshop. She chooses to confide in him based solely on his “uncle-like” appearance and demeanor. The 17 year-old is fear for her life. Her sister Rosalind disappeared three days ago and Patricia thinks someone killed her. Patricia fled home and today on her way to the bookshop someone tried to run her over with a car. The teenager then tops off her alarming story with this confession: “We know of a Secret and we’re being targeted by someone who needs to protect that secret.” After some discussion, words of advice, and much soul searching Mr. Ambo reluctantly agrees to shelter Patricia, but before he can tell her of his plan she runs away. She leaves a note apologizing but does not reveal where she’s headed. That day Rosalind’s battered body is found in the doorway of a local shop. Apparently, everything Patricia said was true. Mr. Ambo enlists the help of his dear friend private eye John Scotter and his lovely secretary and assistant Lottie to find the runaway teen before she becomes victim number two.

THE CHARACTERS: Ducats in Her Coffin (1951) is the second detective novel by Thurman Warriner. Like the debut crime novel Method in his Murder (1950) the trio of detectives once again appear as the tag team of sleuths – Charles Ambo, a septuagenarian book collector; John Franklin Cornelius Scotter, private eye; and Lottie, Scotter’s Gal Friday and primary leg man…uh, woman. Archdeacon Toft who seemed to do some armchair detective work in the first book also briefly appears but has no real input in this story. Instead, the crew travel to Urmsbury when Lottie's research reveals a Canon Toft who lives there.  He is the Archdeacon's brother Gilbert and is a veritable encyclopedia on the Shearstone family, their profitable quarry business and an odd society founded by one of the deceased Shearstones.

To give you an idea of the kind of complexity that face our heroes in this wildly inventive case here is a summary from Scotter:  "Things are beginning to shape up. Till we came down here, we'd hit a brick wall straight in front of our noses.  All we'd got was a lot Girls' Own Paper stuff about a secret... Now we know there's been enough dirty work in the Shearstone family to warrant a bagful of murders.  A ravin' maniac, one son show's left a Naboth's vineyard, won't sell and skips the country. A hunk of land in the middle of the family quarries that still belongs to him. Another son who starts a phoney society and stands to make about ten fortunes on the side.  A family vault in a deserted church. A house that's never been used since it was built, except for Army stoes and wenching. A grandson who's married a screwy widow with a moron s daughter-- what more do you want?"

We learn of the eccentric patriarch Barnaby Shearstone, father to the three living Shearstone brothers, who built the “monstrosity” of a church that sits in the middle of an island above the quarry surrounded by four identical houses built for his sons. Two sons still live in the homes – brothers Edgar and Simeon – while the third, Amos, has not been heard of in decades. Whether he is alive or dead no one is certain. All that is known is he was upset how the business and property was dispersed unequally among his brothers and in a fit of anger he left England and dropped all contact with his family.

Canon Toft spends much of his lecturing on the strange political group founded by Barnaby - The Society of Political Rationalists.  It sounds like a forward thinking society that intends to enact change through lectures and education, but as Toft describes it in detail we learn it is actually a fraudulent charitable organization making money off of its gullible members sizable donations of money and gifts of jewelry. It also espouses some wildly nationalist views that incorporate racism, xenophobia and paranoid conspiracy theories. It is rather obvious to Mr. Ambo and Scotter that the SPR is most likely at the heart of the "secret" that Patricia and Rosalind uncovered and what led to Rosalind's violent death.

First among the many Shearstones the trio of detectives questions about the missing Patricia is her invalid father Madoc and later her haughty stepmother Judith.  There is also Manda, trailing around the outskirts of the action, who is Judith's daughter from her first husband and Patricia and Rosalind's stepsister.  Manda seems a cipher at first but will prove to be instrumental to the unravelling of the various mysteries.

Warriner has a field day with the eccentric Shearstone family. Scotter, who is never one to suffer fools gladly and always speaks his mind, has some great scenes throughout the book. He has some choice words about the rather detestable Judith Shearstone, a woman who married into the Shearstone family for money only. Then there is Simeon, one of Patricia's many uncles, perhaps the most vile of this cast of oddballs, a raving nationalist who is revealed to be selfish, craven and whining. He is the most rabid member of the SPR and has some speeches that no doubt will remind current events minded readers of the nonsense that fuels contemporary conspiracy theories.

INNOVATIONS: Each time I read one of Warriner’s detective novels I marvel at how well he manages to divvy up the action between his three sleuths. Each gets their chance to take center stage with action scenes that always add to the solution and move the story forward to its somewhat surprising finale. Much of the book is taken up with group confab scenes in which our primary three heroes all discuss their most recent findings, mulling over theories, discarding suspects when alibis prove truthful, and trying to make sense of some of the oddities that make the crimes so mysterious. While the bulk of these discussions tend to be a war of wits and opinions between Ambo and Scotter Lottie is never left in the shadows. In fact, she really shines in this book, both literally and metaphorically. Lottie brings a welcome light and rays of positivity to a tale that is mostly about a wicked family poisoned by greed and betrayal.

The title is taken from some lines Shylock says in Act 3 of The Merchant of Venice. Used as the novel’s epigraph the reference was a bit oblique even as a metaphor for me. Rest assured it is fully explained in the last paragraphs of the final chapter. They provide a neat and ironic coda to all that proceeded.

QUOTES: The glare he gave [Judith Shearstone] would have withered a Rochdale aspidistra.

“I’ve met some bright beauties in my long and illustrious career,” Scotter said as they encountered the outer air, “but that bird takes the toilet soap.”

Simeon wasn’t lying, consciously. Like most politicians, he merely had an elastic conception of truth. Truth, to Simeon, was whatever happened to be most desirable of belief at any given moment.

Simeon’s nationalist rant:  “We throw our empire to the wolves without and the opportunists within. We are perishing as the Romans perished. We bow and scrape to a system that has abolished the dignity of man and enslaved half the world. We toy with the same system ourselves; we make a man no more than a leaf on the tree of State.” He paused briefly. “But because there is no life, no volition, no powers of reproductivity in this monster we are creating, it must run down and rust when its initial impetus is exhausted. And in that moment civilisation will collapse.”

It was one of the rare moments when [Mr. Ambo] felt very close to Scotter, when all the differences between them seemed unimportant.

THINGS I LEARNED: Scotter’s dialogue is rich with colorful British regionalisms and occasional samples of Cockney rhyming slang. He says that Patricia has gone for a ball of chalk which I assumed meant she ran away. A check of a rhyming slang dictionary proved me right when it revealed that “ball of chalk” translates to walk. The phrase bob-and-nob, however, is not rhyming slang but is quite literal slang. It means a “shilling a head.”

The unusual word panjandrum turned up in one of Scotter’s frequent strings of bizarre insults. It was preceded a completely made up person and I figured the word was also nonsense. It is, but it was invented not by Warriner but Samuel Foote, an 18th century actor, as a memory test for fellow actor Charles Macklin. Merriam-Webster defines panjandrum as “a powerful personage or pretentious official” and they go on to cite the Oxford English Dictionary for the etymological history of the word. Accomplished actor and memory braggadocio Macklin claimed that he could repeat anything verbatim if it was spoken to him only once. Foote devised the following speech littered with nonsense words of his own invention: “And there were present the Picninnies, and the Joblillies, and the Garyulies and the Grand Panjandrum himself, with the little round button at the top.” He spoke the short speech to Macklin who of course echoed the words flawlessly. That speech appeared in print 75 years later in a book a of stories for children by Maria Edgeworth. Then it took another 25 years before panjandrum entered the language. I’ve not seen it in print until I read this book but Merriam-Webster cites usages as recent as 2018 in two separate issues of The Economist. I’ll bet it was the same esoteric writer in each case.