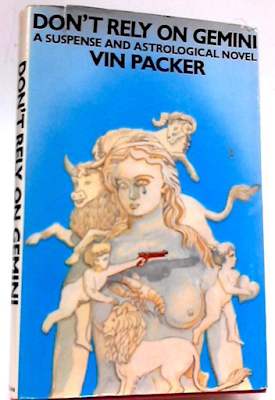 What’s your sign, girl?
Is it compatible to mine?

If your sign matches mine
Think of what we'll have
We'll be making babies together, forever

When I first moved to Chicago I religiously checked my own horoscope on my birthday in the Sun-Times because they include a section called “If Your Birthday Is Today…” and below would be a paragraph about what the coming year had in store for me – and the thousands of other people born in the same day, of course. I would cut it out, put it on my fridge, and review it on the day before my birthday. Invariably it was 90% wrong. But I never bothered to think about all those other people who were born on the same day in the sign of Sagittarius. How did the year work out for them?

That’s the premise of Don’t Rely on Gemini (1969), “a suspense and astrological novel” from the wildly inventive Vin Packer, aka M. J. (Marijane) Meaker. I didn’t for a second believe the hype on the paperback's cover promising “the most gripping spellbinder since Rosemary’s Baby.” For some reason throughout the early 1970s anything that remotely had anything to do with occult, supernatural or even New Age topics were tied to either Rosemary’s Baby (1967) or The Exorcist (1971) or both. The astrology element in this book is used merely to study the concept of parallel lives. A savvy and better-read editor would have done well to compare Packer’s novel to the works of Charles Dickens because coincidence and family secrets run rampant in this book. But would a quasi-literary analogy like that sell books? You bet your crystal talisman, it wouldn’t. 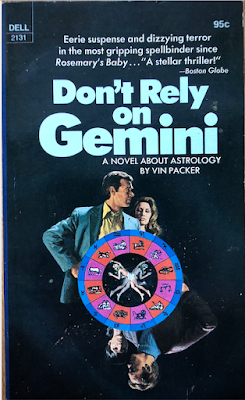 So let’s start with this concept of astro-twins living parallel lives. Astro-twins are unrelated people, complete strangers, who were born in the same year on the same date at the same time. Everyone has at least one astro-twin – well, actually everyone has hundreds, perhaps thousands of astro-twins. And that ought to make all you only children feel a lot less lonely, right? You have myriad siblings who are your astro-twins. But in all likelihood you will never meet them or know them. Regardless, they may be living a life similar to your own. That’s at the core of Don’t Rely on Gemini. And yes, the astro-twins we will meet are born under the sign of Gemini. According to all the mumbo jumbo we are forced to read Gemini is apparently one of the least favorable signs of the twelve in the crazy mixed-up world of the Zodiac. Not just unreliable and mercurial in temperament and obsessive about jobs and hobbies and projects, but apt to lose interest in those projects because of that gosh darned unreliable, mercurial personality.

Archie Gamble is the head writer of a TV special featuring the renowned astrologist Anna Muckermann. In order to add legitimacy to the show Mrs. Muckermann wants to talk about astro-twins and have a few on the air to talk about their lives. Mrs. M has documented evidence of several cases of astoundingly parallel lives in astro-twins that she offers up to Gamble, one case dates back to the days of George III. She insists that the TV show will be a huge draw if people are confronted with the truth of two strangers with the same star charts leading similar lives. This she claims will be proof that the rotation of the planets and other celestial activities do indeed rule our lives. When the moon in the seventh house and Jupiter aligns with Mars not only will peace guide the planets but the ratings will probably go sky high. Or so Mrs. Muckermann and Archie hope.

Staff members including Archie Gamble himself give out their birthday info and ads are placed in newspapers to lure in prospective volunteer astro-twins. There are several bites. The most fascinating comes from Margaret Dana who volunteers her husband Neal as a match to Gamble’s birthday data. She invites Gamble and his wife Dru to her home to meet her husband and discuss the possibility of appearing on the TV show. Sounds like fun, right? But this is a crime novel. Guess what follows? Worse than Mercury in retrograde, my friends. Being born in the house of Gemini with Saturn rising adds up to a volatile Molotov cocktail of a star chart as we will soon find out. 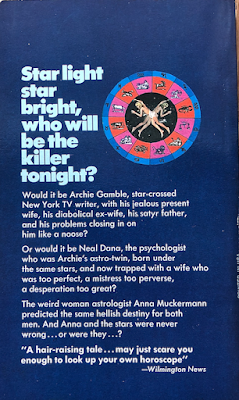 A fight happens at the Dana household just as the Gambles are about to arrive. In the course of the heated argument someone dies as the result of an accident and then – Ding, dong! It’s Archie and Dru on the front porch ready for dinner. And a dead body at the foot of a staircase inside. A bottle of wine is not going to solve this inconvenience.

But that’s not the worst of it. Neal Dana never knew about the Gambles coming because his wife was being coy in holding back the surprise of the evening. Neal, you see, was hoping that his wife was going out to her Italian lesson so he could have yet another secret tryst with his adorable mistress Penny. While making up a tale about his wife leaving the house and ushering the Gambles off his porch Dru Gamble hears a woman crying in a back room somewhere. She is sure it’s Margaret but she and Archie agree to leave because something certainly is not right and they are clearly not welcome. So the Gambles drive away.

Then… Archie loses control of his car going down the treacherous hill that leads to and from the Dana house. He crashes into a tree. They have to go back to the house and ask for help. Just as Neal Dana is about to bury the body in the backyard!

Don’t Rely on Gemini sounds initially like a lurid tale from the preposterous world of pulp fiction. Noirish to the core everyone seems utterly doomed amid the insanely surreal action and a pile-up of plot contrivances. Meaker, however, is playing with a loaded deck here. Each contrivance and coincidence is carefully calculated to twist the story toward her theme as she dares to play with superstition and fatalism in allowing her characters to surrender to fate rather than make well thought out decisions. She manages to juggle the ostensibly absurd moments with a very deadly combination of characters who are easily manipulated and those who give in to obsessive thoughts. Mrs. M proves to be perhaps the most dangerous person of all. In her zealous beliefs and dire pronouncements she contaminates the Gamble’s marriage and their relationship by planting seeds of doubt and foretelling impending doom if the couple does not follow her advice. Saturn is ruling their lives; failure to heed all the warnings will lead to disaster. The law of astro-twins does not lie! 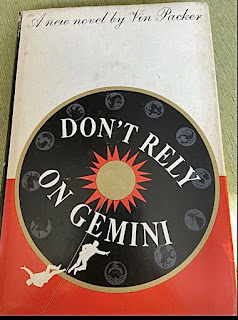 The real conflict, however, has nothing to do with astrology. It is the Gambles’ perception of reality. They know nothing about Penny and Neal, unlike the reader, and they assume that a car that belongs to Penny is actually Margaret’s, that each time they see the green scarfed woman in the Ford Falcon they think they see Margaret. Dru learns of Margaret’s affair with a young man from a diary and letters she finds through yet another one of the many coincidences Meaker packs into her story. At the same time Archie is trying to decide whether Neal’s parallel life is worth putting on TV Dru is trying to protect Neal Dana from discovering his wife’s affair.

But, of course, we know what Archie and Dru don’t – that Margaret is dead. That Neal is having an affair of his own with Penny. Neal becomes dangerously obsessive about Margaret, his guilt overpowering him. Penny is fearful she is losing her older lover and she’s right. She can never hope to gain back his attention when he’s drowning in such a powerful nostalgia, she cannot compete with the memory of the perfect wife he is creating in his mind. Nothing can tarnish that memory just as no one can bring Margaret back to life. Someone is going to have to pay the price for that horrible accident. But wait…was it an accident? Didn’t Penny push Margaret down the stairs? 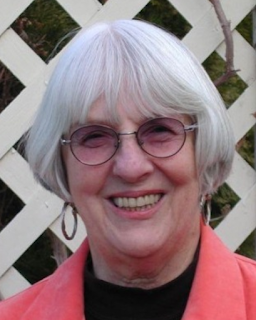 Don’t Rely on Gemini is not only an intriguing thematic exploration of the perils in surrendering to fate it’s also a pop culture smorgasbord of late 1960s America. The book is brimming with brand names, musicians, movie stars and authors including mystery writers Margery Allingham and Mary Stewart. Everything from various models of domestic and imported automobiles to Barry Farber, radio talk show host on WOR and WMCA. Even the plus size dresses and a joke about the maternity line of Lane Bryant crop up in the story. Rock and folk music play in the background of certain scenes as much as Archie’s favorite recordings of operatic arias. Neal disappears into his record collection as well in one of the telling moments playing up the parallel life angle. He plays selections from The Pajama Game original cast album or classical piano music from a William Kappell record to conjure up memories of his dead wife. At other times it feels as if the characters are like the intellectuals of Helen McCloy’s sophisticated Manhattan of the 1940s for the novel is also inundated with literary allusions covering Shakespeare, D. H. Lawrence and the 17th century poem “The Meditation” by – get ready for another coincidence – the obscure philosopher and theological poet John Norris. I could have written an entire blog post on "Things I Learned" alone there was so much popping up within this story.

This was the last novel Meaker wrote using her "Vin Packer" pen name.  The 1970s found her turning to juvenile novels which apparently were her most successful books.  I have acquired several of the Packer books over the years, but oddly this most recent one (originally purchased for last year's "Friday Fright Night" meme but proved less suited for that Halloween feature) is the first I've read.  I'll be digging out the other Vin Packer books I own and tearing through them throughout the rest of this year. Stay tuned.